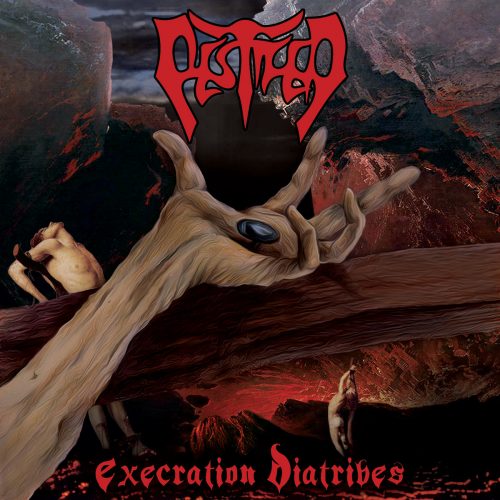 (We present Todd Manning’s review of the new album by the Portuguese death metal band Pestifer.)

If you’ve ever become frustrated trying to parse out what’s Old School Death Metal and what’s New, and maybe what’s just plain Death Metal, Portuguese trio Pestifer (who have recently become a four-piece) leave no doubt about where they stand.

Inspired by only the most atavistic and savage originators of the genre, they are poised to release their debut full-length, Execration Diatribes via Lavadome Productions on February 14th. It is nothing short of a love letter to their forefathers. These Old School maniacs have no goal but to satiate the bloodlust of Death Metal’s most dedicated fans. 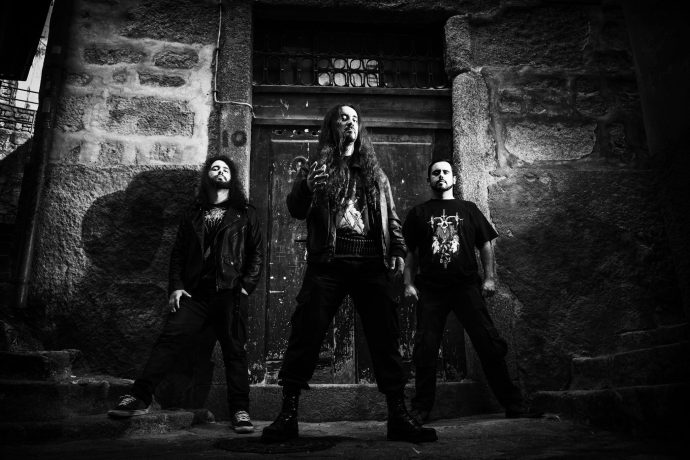 Pestifer’s own formula for brutality draws most heavily from the legacy of Brazilian masters Sarcofago and early Morbid Angel. The guitar solos in particular seem to give a nod to the gonzo stylings of Trey Azagthoth.

After the brief introduction of “March of the Dead Orchestra”, opener “Mars Exult” sets the tone for the entire album. A true ripper, “Mars Exult” is a barrage of atavistic blast beats that occasionally drop the tempo for emphasis. The solo walks a fine line between order and chaos, and does justice to the previous Azagthoth comparison.

The ferocity of the rest of Execration Diatribes is relentless. Tracks such as “Brutal Eruption of Chaos”, “Enslavement of God”, and “Confront Death” mine the fertile territory where Morbid Angel influenced Angelcorpse, the riffing lightning-fast and razor-sharp, and exuding a kinetic violence only a handful of bands (most having something to do with Pete Helmkamp) are able to achieve with a blast-beat.

When Pestifer do slow things down, such as on “Awaken by Death”, where things take on a Slayer-ish vibe for a minute, they never do it for a whole song. Yet these interjections of mid-tempo material always hit that much harder for their rarity. It’s these kind of flourishes that raise the material here to the next level. Pestifer have that knack for songwriting that sets them apart from many other acts who attempt to achieve this level of extremity in Old School Death Metal.

The whole Old School Death Metal revival shows no signs of slowing down, which surely isn’t a bad thing. Truth is, as long as bands keeping shifting their focus of inspiration around and not fixating on one band too much, there’s no reason for things to grow stale. Pestifer have certainly learned their craft at the feet of the masters, but Execration Diatribes proves they have forged a sound all their own.