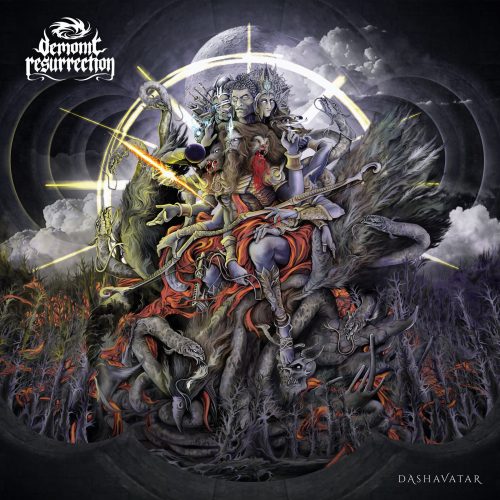 Every country on the planet has distinctive folk music and ethnic music traditions, and while the melodic tonalities, rhythms, and instruments may sound common and familiar to the people of that country, they often sound exotic to the ears of listeners from distant lands. Combining such distinctive folk music traditions with the aggressiveness and weight of heavy metal can produce riveting and fascinating outcomes, in which each of these disparate elements enhances the other, and they can also fall flat. The song you’re about to hear is one of the successes.

The track we’re premiering today through a lyric video is named “Matsya — The Fish“. It’s by an Indian band we’ve been following for many years — Demonic Resurrection — and it comes from their new album Dashavatar, which will be released on March 15th of this year. It has quickly become one of my favorite DR songs, and in my humble opinion one of the best of their creations over the length of a discography that goes back more than 15 years. 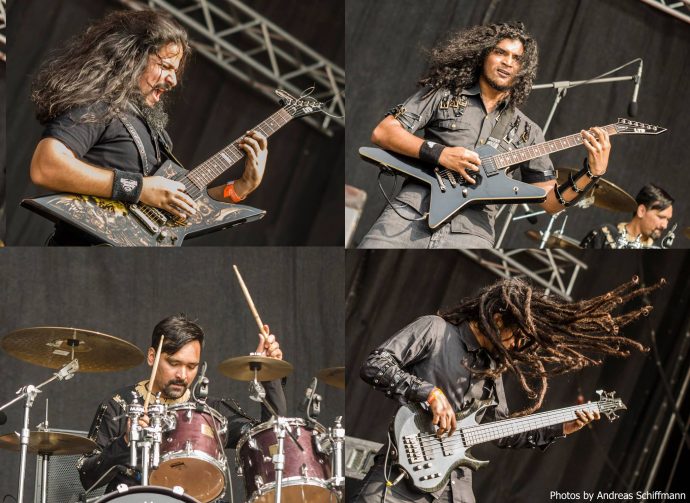 The song is intricate and ambitious, beautifully conceived and beautifully executed. The first seconds sound the album’s philosophical bent, with a sequence of resonant spoken words that end in the phrase: “Man has turned myths into blatant idol worship and created religion as a tool to enslave the masses. Even in the stories, the gods often use deceit and treachery to emerge victorious. After all, they are a reflection of man in his best and worst form. Man made demons, man made gods.”

And then the music begins, with a brief measure of exotic sitar notes followed by heavy, grim, jolting riffing and rhythms and a scintillating guitar solo, with Demonstealer’s bestial growl enhancing the music’s harsh edge. The sorcerous spell cast by the sitar melody continues throughout the song as it twists and turns, swirls and soars, against the backdrop of hammering percussion and sweeping, dark riffs. Another brilliant guitar solo lies ahead, along with the blazing fast jab of the rhythm guitar, synced to percussive bursts in a way that pounds the pulse.

The song has the grand, majestic air of a saga that suits its mythic conceptual underpinnings. And it benefits greatly from the guest appearances of Rishabh Seen on sitar and Devang Shinde on tabla. The lyric video was created by Abhishek Goswami from Minimalist Studios.

According to the band, the title of the new album, Dashavatar, translates to “the ten avatars of Visnhu”, who is “the god of preservation” in Hindu mythology. The songs “speak of his glorious victories over the Asuras, the demons, but these victories are achieved through devious and deceptive means—a reflection of his creator, man.”

The album features striking cover art by Visual Amnesia. It will be released by Demonstealer Records and can be pre-ordered via PledgeMusic here:

Fans living in India can order through the following links:

One Response to “AN NCS VIDEO PREMIERE: DEMONIC RESURRECTION — “MATSYA – THE FISH””