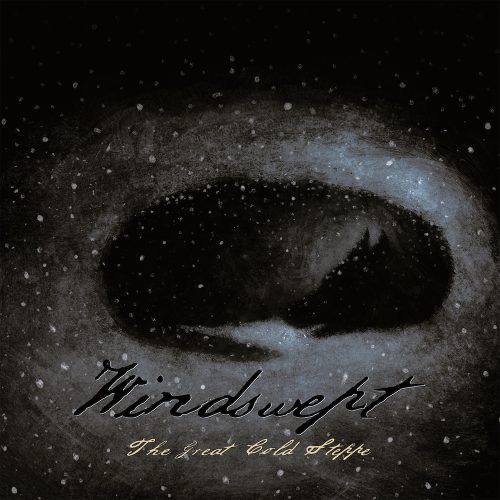 I’m in the camp of those who believe that any music crafted by the hand of Roman Sayenko will be worth checking out. Best known for his work in Drudkh for the last 15 years, he has also released powerful music under the banners of Blood of Kingu, Hate Forest, and Old Silver Key, among others. The latest Sayenko project is Windswept, in which he is joined by Drudkh’s rhythm section, V. and K. On March 31, Windswept’s debut album The Great Cold Steppe will be released by Season of Mist, and today we’re helping premiere another track from the album, “Shrouded In Pale Shining, So Sleeps Infinite Ancient Steppe“.

From the album’s title to the cover art to the names of the tracks, it’s obvious, as the label’s press reports confirm, that Windswept drew “inspiration from the harsh and unforgiving nature of the Eastern winter steppes”. But the music itself burns like a storm-driven blaze.

“Shrouded In Pale Shining” is an intense, aggressive song, propelled at a racing pace by the nearly relentless fusillade of V.‘s blast-beats and the deep flying pulse of the bass notes. And over that surging propulsion Sayenko layers tremolo-driven melodic themes. They come in waves, with the vibrant themes repeated until they sink deeply into the listener’s head as Sayenko shrieks the brief lyrics in a voice that’s on fire, too.

My references to fire and fury aren’t intended to imply that the music is warm or comforting. This is black metal that’s ferocious and bleak, and like the wintry steppes that inspired it, harsh and unforgiving. Those expecting entrancing folk melodies or drifting atmospheric music will need to look elsewhere. Those who want to be lit up by a musical bonfire, press play below.

The album is available for order HERE. The track list is as follows:

Track List:
1. Black Horizon Is the Gates Of a Blizzard
2. Shrouded In Shining, So Sleeps Infinite Ancient Steppe
3. The Stars Are Cold and Indifferent, Sow Their Gleaming Ashes
4. The Great Shepherd Rides His Storms
5. Blinding and Bottomless Abyss Is Howling
6. A Spiteful Wind Buries All the Lonely Whispers

Below we’re also including a stream of “Blinding and Bottomless Abyss Is Howling”, which premiered in early January.