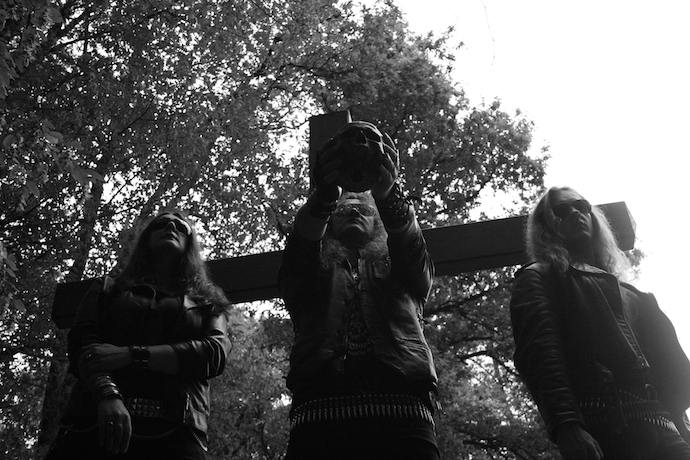 After I listened to the La Jour Se Lève EP last year and then heard an album was in the making, I started anticipating it. Besides, Au Champ des Morts are from France, and I like the French approach to Black Metal.

The new album is really a fine piece of dark art. The anguish and despair of the good old days is totally there. The contrast in the titles is interesting. I really like it! It invites you to take stuff for what it is, the dark and fearful mythology that culminates in the vision of the end of the world. ACdM play a bit with the ironical modern sanitization of religion that is just an attempt to put a nice package around something that actually withholds lots of darkness.

I have one word to describe it and it is “wholeness.” Every single part fits perfectly with all the others. And I’m thrilled by it. We are in an era with lots of bands around, with albums and EPs blossoming every day, and out of this constant stream of new music not all groups preserve that band harmony of old. It’s getting more and more difficult to find well-produced and well-composed music because although you have many bands who may be good at playing every instrument, they also have to put it together and many fail there (and many who have no the excuse for doing fragmented things by calling themselves avant-garde or experimental).

At first I read that this band included one Stephane from Anorexia Nervosa. And the vocals did indeed remind me of AN. I had the vague recollection of one Stéphane being AN’s vocalist at one point, so I went around thinking it had to be that same Stephane in this band for some reason. Eventually I checked and found there are actually two Stéphanes and my mind had totally betrayed me, which happens all the time. Thank hell for Metal-Archives.

So now I know that the Stéphane behind this project was the guitarist in AN, but he is both guitarist and vocalist in ACdM and he does a fantastic job here. His vocals convey despair and contribute a lot to the atmosphere.

So you have to listen to this one. There’s a reason why this band has gotten favorable reviews here already — you can check them out here and here. We all agree they rule!

What strikes me with Dans la Joie is the overwhelming feeling of despair and anguish the whole album gives. I can see it’s all tied to the artwork and probably the lyrics (as far as I can tell judging by some of the song titles). Tell us about the lyrical themes, the title of the album (which is kind of a surprising contrast) and how all this fits with the music.

Wilheim: “We are the witnesses of death under all its forms”. There’s a whole concept about Death emerging from the record, even if we didn’t conceive it this way. But not only physical death: it also deals with spiritual and symbolic death.

Stéphane: Using the term “Joy” for the title of this record hasn’t been made randomly: we used this word in its biblical way, talking about the unveiling of the true meaning of God’s speech. We also like the contrast between this name and the feeling that emerges from the album. It’s a part of the whole symbolic.

Wilheim: There’s also an alchemical way to understand this whole art, through its music and artwork, with pure and enlightened matter emerging from the burned to black foreground, announcing the creation of Philosopher’s Gold.

I absolutely love how the atmosphere has been built as it stems right from the instruments. How did you do all this? Has it evolved naturally in the composition process, for example?

Stéphane: Thank you! At first, we just say to ourselves that we’re going to use vintage pedals and classical Marshall Amps, to retrieve the feeling of old school music, something organic, which permits to write in a spontaneous, visceral way. In order to express something very pure, we have the need to let it flow, to not think or interfere within the music’s creation. The “weird” or light sound, it depends how you see it, just came to me trying different settings on guitar pedals, in order to achieve what can match the songs best. So yes, it comes in a very natural way, no reflection, no plan, just us trying to extract the music from the void.

What kind of musical influences can we find in ACdM?

Wilheim: We have a strong background in Dark music, and we want to express every facet of these influences in ACDM, without any restraint. It goes from Cold Wave, Black Metal, and old Hard Rock, but not only those: every kind of music that had struck our hearts made its way through ourselves to be part of this piece.

As influential bands, we can name Bathory or Celtic Frost for the early years of Black Metal; Austere or The Devil’s Blood for the quite “modern” era; And Also the Trees or Sisters of Mercy for a more alternative way to make dark music.

Tell me about the song “La fin du monde,” what kind of chant is it? What is it all about? Who did it? And how does it it fit in?

Wilheim: That was Cecile G. who came with the idea of making this song, on the basis of this melancholic riff played by our former guitarist Migreich at the end of a rehearsal session. At the end this solemnity really fit with the whole atmosphere of the album, and was a perfect closure act.

Cécile G.: I’ve always been very influenced by bands like Dead Can Dance or Rosa Crux and this is reflected in my singing. I wrote these lyrics as a spectator of the end of the world. The evolution of man from his birth to his loss, the sad spectacle of a humanity that no longer believes in anything and clings to what it can. I chose Latin for its sonority and its spiritual evocation.

The song “Le sang, la mort, la chute” is pretty funereal and dark! It really stands out. Every song kinda brings different musical experiences without losing a sense of a wholeness. Not to mention all the instruments, layers, and the awesome vocals giving that sense of an overall wholeness. A dark, full-of-despair harmony, if you will. I truly appreciate this in bands, and not many achieve it. What kind of considerations did you guys have while composing in order to get all the parts to fit so well?

Stéphane: I think what you describe is precisely the heart of this project. On this particular song, the atmosphere is obtained between the contrast of the intro riff, in a Cocteau Twins style, and the metal parts, where I think there’s a strong Celtic Frost reminiscence. This is the alpha and omega, and when you manage to transcend it, everything is complete, the journey achieves.

Wilheim: We never attempted to play Black-Metal-like music with only blast-beats and shrieks: we just wanted to give a sincere performance of what music told to us, like a form of transcendence. This is probably what makes this whole work homogenous in the end.

What is the New Wave of French BM all about in your own words? Any bands to mention?

Stéphane: I think it will be a little presumptuous for us to describe something like this. We’re just creating music, and we cannot speak for the other bands. But, I find that, after a few years, maybe we can distinguish a particular form of expression in a few bands from France. Even if there’s not a doctrine and we’re not talking of an orthodox scene, we can find some common points with bands like Alcest, Aluk Todolo, Year of No Light, or Throane.

I really like the vocals. They remind me of Anorexia Nervosa and I think they fit perfectly here. So I’m absolutely bound to ask if there is any remote possibility of reviving AN.

Stéphane: AN is not planned to be revived. I’ve spent the last 10 years turning the page on this era, reconstructing myself. I feel really proud of everything accomplished with this band, but it is behind me. Now, I’m focusing on the way of my initiatic journey, and producing what we want without compromising ourselves at all.

Where did you guys record the album?

Wilheim: Drudenhaus has been linked to AN history because it has been founded and is still led by former AN keyboard player Benoît Roux aka Neb Xort.

Stéphane: He is a close friend of mine, and it has been a logical choice to proceed recording with him. It feels like home.

Which other bands have used Drudenhaus studio? Anything you would like our readers to check?

Stéphane: Benoît is very selective about what he produces, so basically everything that’s out from his studio has a strong personality and deserves interest. Alcest, whom we don’t have to present, and Aluk Todolo are recurring customers, and Varsovie is also an amazing band which is very dear to my heart. There are also Soror Dolorosa and Christicide, I like a lot, but the list is too long for me to quote every one!

Anything else do you want to add?

Let yourselves be invaded with Joy and Light.

One Response to “AN NCS INTERVIEW: AU CHAMP DES MORTS”