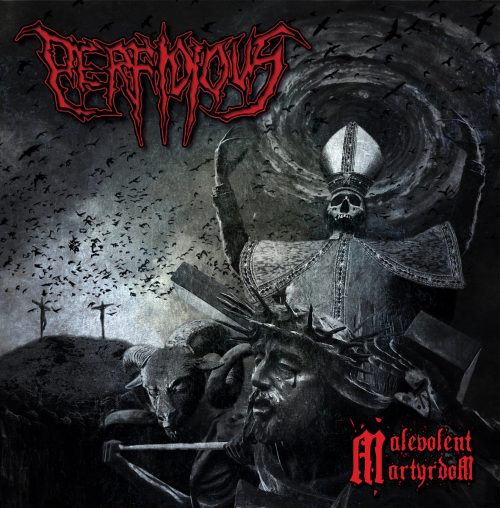 In less than 10 days Death Metal Industry will release Malevolent Martyrdom, the debut album of the death metal band Perfidious, whose members are based in Milan and Novara, Italy. Today we bring you the premiere of a track from this vicious album named “Ancient Voices of the Past“.

With a cavernous voice roaring and howling like an unearthed monstrosity that has been storing up hate for centuries, the rest of the band deliver an intensely infectious battery of jolting riffs and punishing rhythmic grooves. With guitar leads that seethe, slash, and shriek, the music has a sinister aura that becomes increasingly poisonous… even as it gets the listener’s head moving even more forcefully as it charges ahead.

It’s the kind of death metal assault that pulses and surges with powerful, malignant energy. Definitely a nasty piece of work, but highly addictive and immediately galvanizing. We hope you dig it as much as we do.

Malevolent Martyrdom will be released on February 14, but you can order it now at these locations:

Another track from the album, “Human Conceit”, is also streaming at Bandcamp, so we’ve brought that stream here as well.