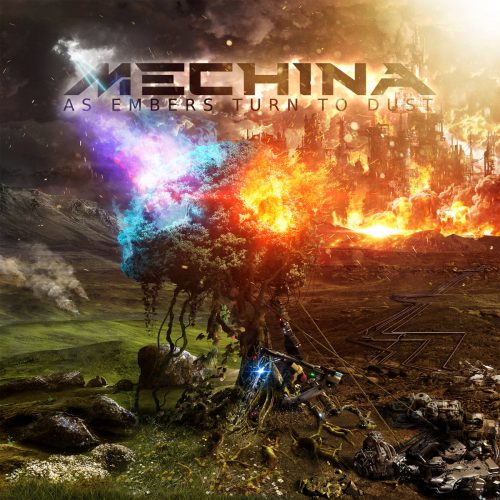 (Chicago’s Mechina released a new album on January 1 and, continuing a long tradition, DGR reviews it.)

The idea of a band creating their own lore occupies a special place in my heart, a place where admiration and hilarity co-exist in the case of Mechina. The ambitiousness of trying to set up a universe and tell a multiple-release-spanning story is incredible, in an age of music that is quickly devoured and disposed of, reserved exclusively for streaming and set up to run in the background. Going beyond the usual goal of “let’s make a really good disc” and into one that seeks to create a musical space opera that pulls from equal parts miltiary sci-fi and exploration segments, that is where my admiration comes to fruition.

That the Mechina crew have doggedly sought to create this saga on a yearly release schedule, with the occasional single release ahead of time, has felt like an exercise in insanity. The hilarity, for me at least, has been in the part where year afer year I have to describe this to what may be a new audience not feel like I’ve fallen into a feedback loop of repeating myself. 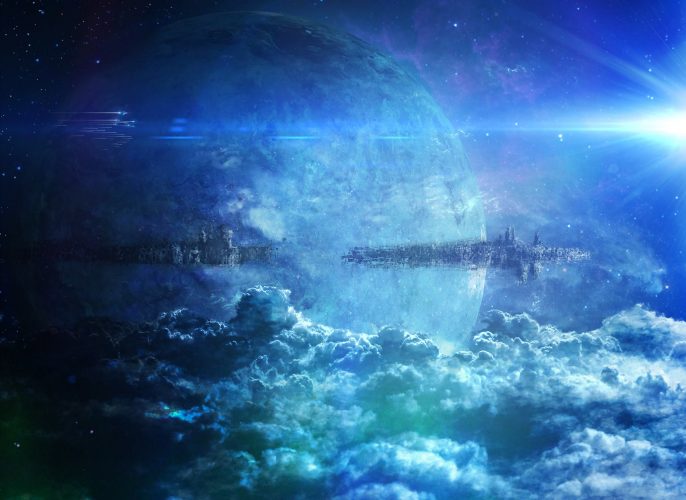 This has led to a yearly debate about whether the group are being hard on themselves with their scheduling, and occasionally it has felt like Mechina are in fact stretching themselves a little thin. Each year has seen their albums grow larger in size and scope, with 2015’s Acheron feeling a little bloated and bursting at the seams (although, to make it clear, I like that disc a whole lot for really stretching its wings) and 2016’s Progenitor feeling like a retraction back into much safer and more recognizable territory.

Now, 2017 has rolled around and so too has come the next Mechina disc, As Embers Turn To Dust, which the band are treating as the cap to their current prequel story arc of which Acheron, Progenitor, and single “The World That We Lost” have all become parts. That means there’s a lot that rides on As Embers Turn To Dust, both musically and lyrically, as Mechina spend much of the album wrapping up current musical motifs and ideas into a nice, neat package, tying it up and sending it off into the ether. It means that As Embers Turn To Dust has a sense of finality running through it musically, wherever in the group’s lore timeline it takes place. It also means that if you admired the last two discs, Embers is going to have a lot more for you to love.

More so than the other Mechina albums, As Embers Turn To Dust has a sense of immediate familiarity about it. Embers gets a lot of mileage out of recurring themes for its group of songs, including multiple references, vocal lines, and melodies that listeners may recognize from the previous two albums. Since As Embers Turn To Dust has been given the job of putting a pin in the stories of Acheron and Progenitor, this makes sense.

But where Progenitor felt like an album where Mechina were going to do the best version of themselves to date, whilst staying firmly within their wheelhouse, Embers feels like the greatest hits and highlights package of the previous two discs, with the occasional daliance into something new. With a schedule as grueling as a yearly release cycle and as big as Mechina make their music, it can’t be expected that the band will break boundaries every time. When they do decide to go adventuring on As Embers Turn To Dust, though, things work out excellently.

Since Embers is pulling lessons from its two predecessors you get the huge and increasingly electronics-assisted orchestral groove of Progenitor and the more ambitious instrumental sections of Acheron for a grand total of ten songs. Vocalists David Holch and Mel Rose both get the run of the disc, providing a massive amount of work in the songs that aren’t strictly instrumental. The result is that the song lengths, which range anywhere from five to a little over nine minutes, feel justified. Every talent that those two have displayed beforehand is broken out here and nothing is left on the table. Both vocalists go pound-for-pound with the instrumental pyrotechnics that main musician Joe Tiberi uses to construct each song.

If you’re a big fan of songs where Mechina sound like they’re providing the soundtrack to a military invasion, breaking out the war drums, horns, and turning the music completely crushing, there’s a bunch of that layered throughout Embers as well. The back half of the album especially leans heavily into the martial themes as the story the band are telling inevitably gives way to destruction, as most Mechina discs are wont to do. That said, I personally am also still a tremendous sucker for the times when Mechina break out a bouncy groove and build a song around it, as in the infectiously catchy “The Tellurian Pathos”.

I found that over the time I spent with Ember’s predecessor Progenitor, I really came around to loving two songs. One of those was “Planetfall”, which admittedly was probably one of the heavier overall songs on that album, with the sort of multi-stringed groove falling to the wayside in deference to some some orchestral death metal bombast (and one monster of a guitar solo). The other was “The Horizon Effect”, which was pretty much the polar opposite.

Embers includes what sounds like a sibling to “The Horizon Effect” in its more traditionally electronics-assisted and shamelessly catchier groove, a Mel Rose-carried vehicle that’s one of the last songs on the album: “Division Through Distance”. “Division” is happy to revolve around a couple of real meaty guitar parts, light synth work in the background, and a couple of immensely strong vocal hooks. “Division” is basically the sibling of “Horizon Effect”, as it feels drawn from the same well.

However, “Division” is one of the last songs on Embers, where its sibling sat dead center within Progenitor. This means that although “Division” is the “poppiest” track of all the songs present on Embers — especially when you discount the Acheron-esque instrumental bits, parts which I enjoyed quite a bit, the three serving nicely to give Embers the feeling of having “movements” — it comes at the back end of a lot of ferocity this time around.

Although Mechina don’t achieve the sort of death metal level heaviness on Embers that they did on an album like Xenon — which was something of a relentless disc — Mechina do still skew toward the heavier side of things. Embers sounds like a hybrid of Acheron and Progenitor. It stays well within Mechina’s safe range, as Progenitor did, but at the same time it occasionally reaches for the stars and makes a play at the grand, like Acheron. The aforementioned instrumental pieces add to that feeling as a whole, with Embers coming across like the middle meeting point of the wide pendulum swings represented by the two previous albums.

Embers does seem a bit overly familiar at times, but by the same token the comfort zone for this band still results in some quality work. Like every other Mechina release, I’ve found myself with a handful of new favorites and an album that I enjoy letting spin from front to back.

Mechina have crafted themselves an interesting universe, one that clearly evolves and changes as much as the band does. Right now, they’re in a relatively stable form and the music reflects that, Embers further solidifying Mechina’s overall sound. As before, though, it will be interesting to see where they go and what the band will do next. And as before, I look forward to being surprised.

7 Responses to “MECHINA: “AS EMBERS TURN TO DUST””