Metalheads are geeks (I know, because I am one), and they have long memories. Many of them also love burrowing down the gopher holes of history, trying to learn where things started (yes, I’m a metal gopher, too). And many also zealously honor bands who played pivotal roles in the evolution of genres and sub-genres (and sub-sub-sub genres), even when such bands recorded precious few songs, and did so decades in the past. Which brings me to the Norwegian black metal band Strid.

I first learned about Strid only nine months ago when Neill Jameson devoted part of his NCS series on black metal to the band’s 1994 self-titled EP, and I’ll take the liberty of quoting part of what he wrote about them then:

“In a perfect world I wouldn’t be writing about this as being underrated, seeing that it’s a fucking classic and the foundation for absolutely every single sad bastard black metal band out there, but I had a conversation with Austin from Panopticon at Migration Fest and we both agreed that while there is an enormous ‘DSBM’ thing going on, the majority of these cut-happy kids have absolutely no idea about this band.

“While I was researching this piece (looking for videos on YouTube) I kept coming across all these side-swiped haircut motherfuckers with ironic band names and pseudo screamo songs, so many that I needed a palate cleanser to remind me that depressive black metal (and not “depressive” “black” “metal”) once existed and was genuine. Anyone in a DSBM band should be forced to listen to this over and over until they get it, and if they don’t then someone should take a copy and beat them to death with it.”

Neill does have a way with words. And when I listened to the song he included with his write-up, “Nattevandring”, I was knocked over by it. I did some research of my own about Strid, though not until more recently.

Strid’s origins can be traced to a band called Malfeitor, which released two demos in 1991 and 1992. The band then re-named itself Battle, and then soon changed that name to Strid, which means “battle” in Norwegian.

Strid’s original members, who were also in Malfeitor, were bassist/vocalist Espen Andersen (“Storm“), drummer Kenneth Søimer Haugen (“Jardar“), and guitarist Lars Fredrik Bergstrøm. They released a debut demo in 1993, consisting of a single long song called End of Life (which had previously been recorded when the group called itself Battle). The next year they released that self-titled EP consisting of two songs, by which time guitarist Edvard Rødseth (“Ravn Harjar“) had also joined the band. Storm’s vocals were recorded in a single take in the studio. 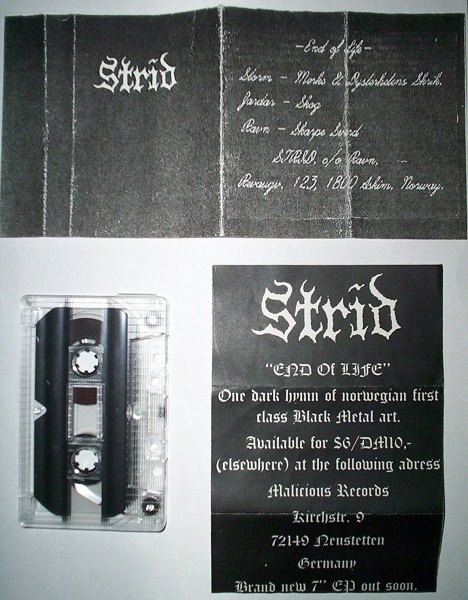 And there have been no further Strid releases since then (apart from a compilation released in 2007 by the Greek label KYRCK Productions that includes all of the Malfeitor, Battle, and Strid material), although Metal-Archives lists the band as “on hold” rather than “split-up”.

In 2001, Storm committed suicide, and Lars Fredrik Bergstrøm died at age 40 in 2014. M-A continues to list Ravn Harjar as a member, along with bassist/vocalist Yusaf Parvez (“Vicotnik“) (Dødheimsgard, ex-Manes, ex-Ved Buens Ende) and guitarist Sigmund Hansen (who has been a live member of Dødheimsgard).

And perhaps the “on hold” status is due in part to a statement by Ravn Harjar that appeared during 2014 on Strid’s Facebook page (here) that in the autumn of 2015 the band planned to begin recording their first full-length album, which would be entitled Endetid (“end of times” in English). But it’s unclear whether such plans lasted for very long, or will ever come to fruition, in light of this somewhat ambiguous Facebook post by Ravn Harjar in January 2015:

“With pride and grief we present the end of STRID. The band has been a burden for the involved, and with the recent development within the ranks of STRID, it has become a personal vendetta to release the material from the last 20 years. Our lead-guitarist, and main composer of End of Life left this life early the year of 2014. He can never be replaced, and with the death of two of our most important musicians during the years, we are not thankful for the work that lies ahead of us. The joy of music is lost, and all there is left is grief and the will to complete the work that has progressed more then half our life.”

The three tracks I’ve embedded below are “End of Life” and the two songs from the Strid EP, “Det Hviskes Blant Sorte Vinder” and “Nattevandring”. They still sound amazing; and when you consider when they were recorded, they’re even more amazing.

One Response to “THE REARVIEW MIRROR (STRID)”