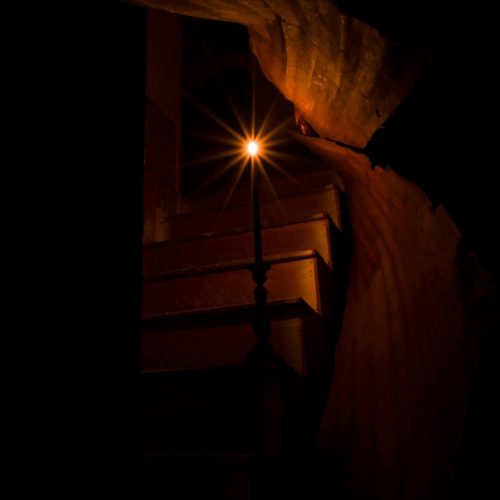 The announcement included a statement by Naas Alcameth that I’m just going to quote in full. I trust I don’t need to explain why this is newsworthy, but if an explanation is needed, I’d simply point you to the stream of The Dreaming I, which I’ve included below the statement. 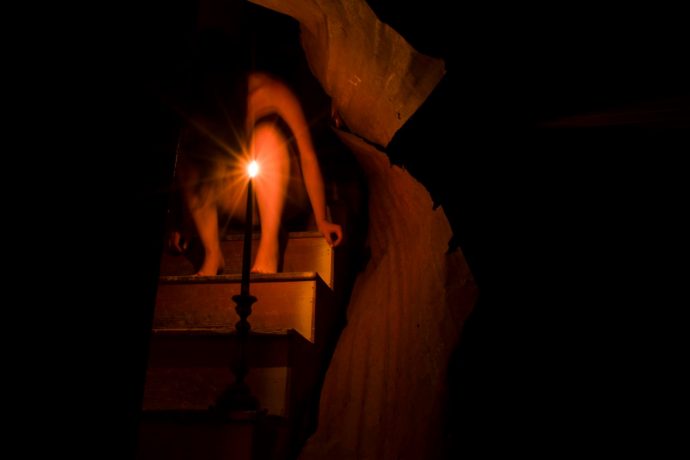 “AORATOS stands as the simulacra of the multitudinous genius loci, haunting spirits which preside over and manifest within out-lands forgotten, and the inner sanctum of the shadow-self. Probing further and expanding upon subjects presented within Naas Alcameth’s AKHLYS, both and sound and subject wanders far beyond the scope of genre binding horizons. The nameless daemon’s of ruins, deserts, trackless forests, forgotten crypts, and the dark labyrinths of dreams, given voice and presence within an amalgamation of dark ambient, black metal and deep ritual drone, AORATOS serves as a reflection and voice for the countless and diverse ominous presences residing within the provenances of absence, desolation, and inner darkness.” 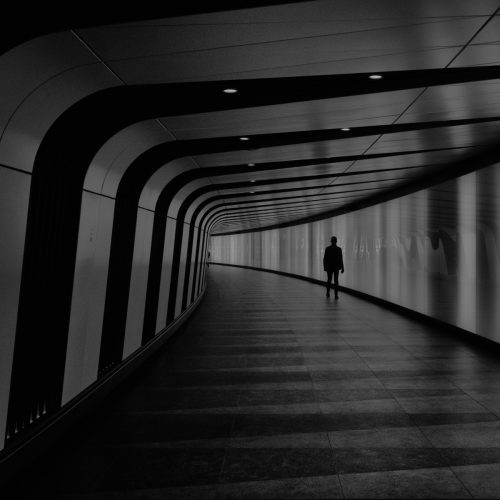 I have starkweather to thank (as I have in the past) for bringing this next release to my attention. It’s the debut album of the one-man London-based black metal band Kassad. Entitled Faces Turn Away, it was released on February 5 (digitally and on tape).

This album isn’t my first exposure to Kassad. Almost exactly one year ago I enthusiastically reviewed Kassad’s debut EP Humans in another one of these Shades of Black posts (and I still urge you to check that out if you haven’t already). This new album is a stunner, too.

The music isn’t too beholden to tradition, but doesn’t completely forget it either. It’s boiling hot, scalding enough to bleed your ears, but just as often it’s as desolate and drifting as cigarette smoke in a lonely desert bar out in the middle of nowhere, with brilliant stars and moonlight overhead, mocking the wasted lives below. It strikes that perilous balance with a sure hand, the fire and the smoldering embers connected at a deep and organic level.

The music’s powerful allure is rooted in the melodies, which hit the target even when the songs (and the vocals) are at the zenith of their fire-storming intensity. But the most emotionally devastating moments come in the half-life, half-death of songs like “Void”, where the vocals undergo a striking metamorphosis, and “Broken”, in which searing lead guitar vibrations spear the heart dead-center.

But really, every song connects at a primal level, plumbing the depths of human affliction and resilience. Dramatic variations from song to song add to the overall strength of the album as a transportive experience, all the way down to the mystical ambient drift of the closing track, “Pulse”.

To repeat, this is a stunner. 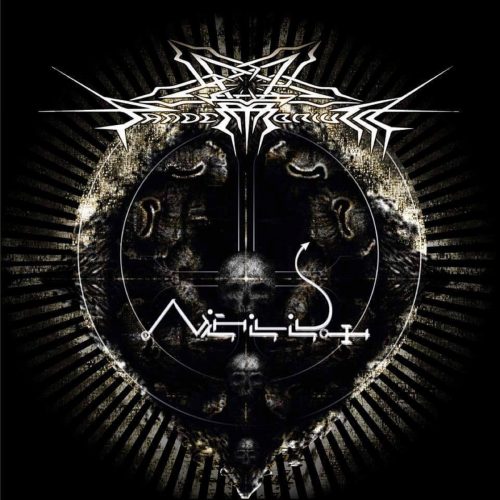 Now I’ll turn to a few advance tracks from an album that hasn’t been released yet — though it’s coming up quickly. On February 15, Old Temple will release the new album Nihilist by the Polish band Pandemonium.

The genesis of Pandemonium occurred during the late ’80s, and since then they’ve released eight albums including this one (with three of those released during a time when the band had changed their name to Domain). Not surprisingly, there have been line-up changes over that stretch of years, and the new album marks the first appearance of two new members.

Old Temple’s Bandcamp page for the album currently includes streams of three songs from the album. I’m especially fond of “Nations of Saves”, in part because of the bass solo and the dismal slithering guitar that appear in the introductory passage, but all three are very good. Integrating elements of both death metal and black metal, they’re heavy monsters, but with an imperious, deeply ominous atmosphere and off-world soloing to go along with the feral brutality.

The integration of head-slugging heaviness and head-twisting atmosphere is a difficult trick, but these songs nail it. 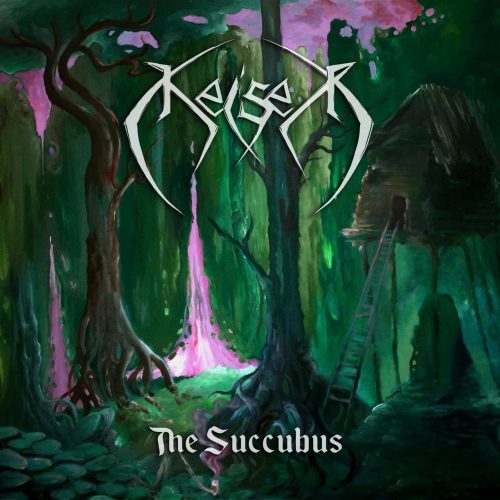 Keiser is the name of a duo from Levanger, Norway, and on March 1 they’ll be releasing their debut album, The Succubus. I’ve heard parts of the album, though haven’t yet finished it — but I wanted to mention it now, because I really like what I’m hearing.

The only single released from the album so far (and I think it may be the only track that will be divulged pre-release) is “Pandemic Herb“. I’ve heard enough of the album to tell you that the songs aren’t all cut from the identical bolt of cloth; the music varies, which is one reason I’m enjoying the album.

“Pandemic Herb”, for example, is a real adrenaline rush, a furious, thrashy romp but with multiple changes of pace and highly infectious heavy metal riffing in the mix. As the song bolts ahead like a racehorse, you’ll also be treated to scintillating guitar arpeggios and demonic vocals with a high acid content. A dynamic, multifaceted piece of music that has a ton of primal appeal.

For more info about the release, follow this page: 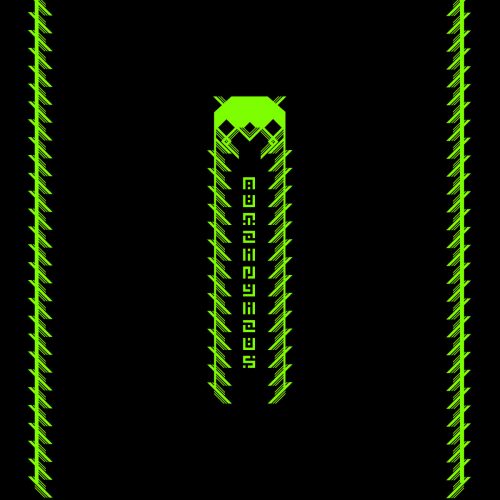 This two-part Shades of Black has included a large number of one-man bands, and I think Seminary from Calgary, Alberta, Canada, is another one — though I’m not 100% sure. Seminary’s latest release, which erupted on January 20, is an EP named Automnymous (that’s not a typo).

Once more I must thank starkweather for recommending this release. In his message to me, he made special note of the layering and tonal clusters present within the music, making for “extremely bugged out frequencies and noises”. He likened the music to “Jute Gyte on a grind bender”. How could I resist listening?

I don’t have nearly enough music training or technological knowledge to detect and dissect everything that’s happening in these 12 tracks — which collectively rocket by in 15 minutes — but they’re a mind-bending dose of exhilarating pandemonium. The layering of guitar tones and swirling, vaulting, veering arpeggios is wondrous, and the brain-boiling vocal shrieking is hair-raising.

Although the music moves in unpredictable directions (as does the drumwork), changing tempos as often as you might inhale and exhale, it’s not rampant chaos at all. It’s just extremely intricate — and lightning fast. In addition, lurking within this ripping vortex of sound and maniacal instrumental exuberance are whipping tendrils of melody and chiming starbursts that give the music added appeal. In a word, amazing. 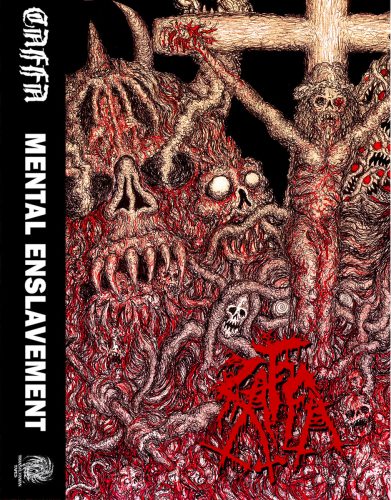 All good things must come to an end, even if only for a week, and so I’m now concluding this two-part post — and doing it in good style with the debut release of Caffa.

Caffa are based in Oakland, California, and their line-up includes drummer Chad Gailey (Acrament, Necrot, Rude) and vocalist Jimmy R. (Swamp Witch, Gravecoven). I wouldn’t call Caffa a black metal band, but I’ve included them in this collection anyway, mainly because I’m very high on their debut EP and also because it’s damned dark.

The name of the EP is Mental Enslavement, and it will be released on February 22 by Transylvanian Tapes — though a digital version is available now. Summing up the album in a few sentences is a challenge, but I’ll stitch these impressions together:  primordial slaughtering; apocalyptic ghastliness; pestilential plague-vectoring; bone-splintering bestiality; stunning oppressiveness; unhinged barbarity; pervasive darkness.

Caffa probably display their greatest power when they’re moving at their slowest pace, when the music sucks the breath out of you while bleeding you out from horrifying jugular wounds. But it’s a close call — they achieve breath-taking levels of rampant destructiveness, too. The variation in the vocals, from horrific growls to wrenching wails, is as staggering as every other dynamic change you encounter over the course of this eye-popping release. Brilliant stuff….

(Thanks to Miloš for recommending the EP to me.)