I’m especially happy to present the premiere of a video for “Eat the Warlock“, which is one of the songs off Triumph of Gloom, the 2016 debut album by Australia’s Rebel Wizard, an album that will soon be reissued by Prosthetic Records on CD, eye-catching vinyl, and digitally. I’m especially happy not only because “Eat the Warlock” is a hell of a good song from an amazing album, but also because this is sort of like a a joyful reunion for me.

I first became acquainted with the music of Rebel Wizard back in the fall of 2015 when I discovered Negative Wizard Metal, the fourth of five EPs that Rebel Wizard released that year. I frothed at the mouth about it on our site, and then did more frothing later in the year when the fifth EP (Invocation of the Miserable Ones) reared its head.

Time passed, and last August Rebel Wizard released Triumph of Gloom. As much as I had enjoyed the previous EPs, this album really was, and is, something rare. It left me beginning my review in this way:

“It may go too far to proclaim that every fanatical lover of metal, regardless of genre, will love Triumph of Gloom, or that the album captures every good and fundamental thing that makes metal worth our passion. But if those claims would go too far, they wouldn’t overreach by much.” 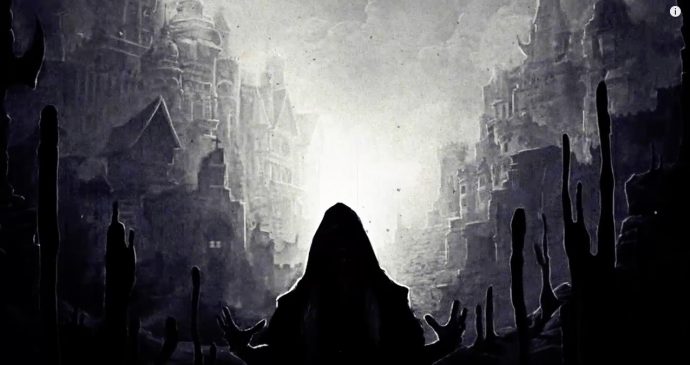 The album has lost none of its luster since then. It’s an electrifying, high-intensity collection of absolutely masterful riffs and scintillating lead guitar pyrotechnics, organized into songs that are powerfully addictive from the very first listen. And what’s more, they represent an ingenious and unusual amalgamation of metal influences that include black metal, thrash, NWOBHM, and even power metal.

The album sounds very much like what it truly is — a labor of love that reflects the emotional impact on its creator of more than 30 years of listening to metal across a range of genres. That creator — Australian musician NKSV (best known, until now, for his work under the name Nekrasov) — coined the term “negative metal” to refer to these hybrid sounds, not because the music is intended to express depression or nihilism, but instead to reflect a casting off of limits, an “anarchic alchemical process of outsider energies respecting the power of traditional triumphant metal into a unique sound to smash out the coerced gloom and banality of our times.”

“Eat the Warlock” manifests that power in vivid fashion. It well-represents all the vibrant energy and un-forced genre mixing that make the album so damned excellent, from its surging riffs to its thrashing rhythms, its melodic hooks, its scintillating guitar leads, and its flesh-rending vocals.

If you missed this album before, don’t miss it now. Triumph Of Gloom will be released by Prosthetic on February 24 and will be available on CD, digital, and limited edition vinyl formats. For preorders in North America, go to THIS LOCATION. In Europe go HERE. Digital editions can be obtained from Bandcamp HERE, Amazon HERE, Apple Music HERE, iTunes HERE, and Google Play HERE.