On New Year’s Day of this year I posted a large round-up of new music that included brief teasers of music from a vinyl split release by Finland’s Hooded Menace and the Canadian band AlgomA. At that point, release of the split by Doomentia Records had been delayed past its originally scheduled November 2016 release date, but it finally became available at the end of January (and the limited-edition splattered-color version of the vinyl is already sold out), and full streams of both songs are now up on Bandcamp.

The artwork for the split was painted by the Italian maestro Paolo Girardi. My own admiration for his work probably appears slavish to regular readers here, but man, what he did for this split really makes me drool. I’ve ordered the split on vinyl just to be able to hold it in my hands, though I didn’t find out about the vinyl release until too late to grab one of these: 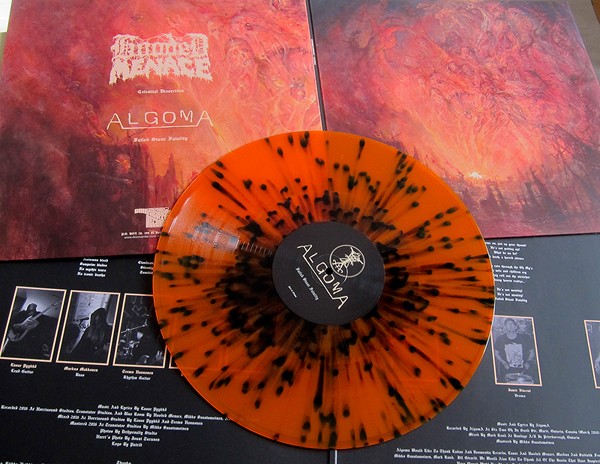 The music is damned good, too. The Hooded Menace track, “Celestial Dissection“, marks the first recorded appearance of the band’s new growler Harri Kuokkanen. Not surprisingly, it’s a crusher, lurching and stomping from the outset, with a melody that’s as queasy as it is dismal, and Kuokkanen’s vocals are a wrenching expression of agony.

Just past the half-way point the song moves into a different phase, becoming more of a steamrolling juggernaut and then opening up into a showcase for some wonderful lead-guitar variations. The song hits a groove, driven in part by a warm pulsating bass line, with an eerie haze of swarming guitars circling around it. The back half of the song really makes it stand out.

AlgomA’s contribution to the split is “Failed Stunt Fatality“. AlgomA are over on the sludgier end of the doom spectrum, with wretched howling vocals that sound like a man who’s bleeding out but still has a lot he needs to say in the minutes left before he expires. The song is heavier than a very heavy thing, with the kind of bass and guitar tones that threaten to fracture the fillings in your teeth.

As ugly and mercilessly mauling as the song is, the fracturing rhythms will get your head moving — in increasingly animated fashion as the band step on the gas in the closing minutes. Damned lethal and damned bleak, the song makes a fine complement to the Hooded Menace track. And at the end you’ll find out where the song’s title comes from.

The black vinyl version of the split is available here:

AlgomA’s track is available as a digital download on Bandcamp, but the Hooded Menace track is stream-only (at least for now).

3 Responses to “SHORT BUT SWEET: HOODED MENACE AND ALGOMA — A SPLIT”