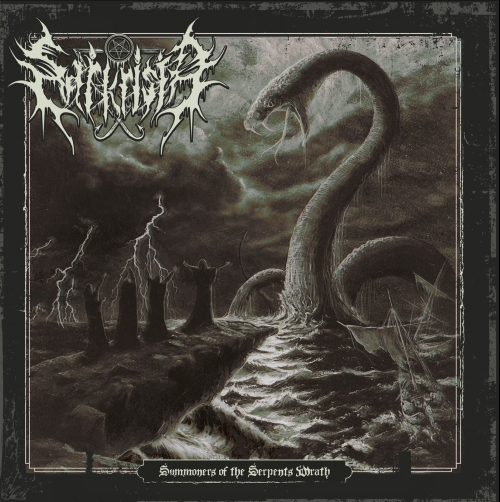 I try to have something new ready to post every day by around 5:30 or 6:00 a.m. Pacific time, which is the awkward time zone in which I live — awkward, because the vast majority of people who visit this site are in time zones that are between two and 12 hours later than the one that organizes life here in Seattle, which is why I start things so early (for me). Sometimes I get the starting post ready before I go to sleep the night before (which is what I did with this one), and sometimes I get up in the darkness and do it the day of.

As you can tell from the title of the post, I’ve collected some new music to spread before you today. What you can’t tell is that the collection is ENORMOUS. It’s so big that last night I couldn’t even finish what I had planned for Part 1. So I decided to pick one band included in Part 1 and defer the others to Part 2… and Part 3.

So how did I choose the one band to tide you over until I finish the rest of this musical flood? In a nutshell, Sarkrista are a remarkable discovery. Allow me to explain.

It’s only been a few days since I discovered the lyric video for “Black Devouring Flames” and I’ve already forgotten how I found it. I do vividly remember becoming ecstatic when I heard it, and it continues to produce ecstasy even though I’ve listened to it repeatedly since then. It’s just one of those songs that punches all sorts of buttons in my head simultaneously.

The song comes from the new album by the German melodic black metal band Sarkrista, which is named Summoners of the Serpents Wrath. It will be released by Purity Through Fire in a matter of days.

I hadn’t encountered Sarkrista before encountering “Black Devouring Flames” and only later learned that the band have released one previous album, The Acheronian Worship, in 2013, as well as a 2015 EP (The Evil Incarnate) and three splits.

The song boils with energy, the vocals maniacal in their ferocity and the music exploding from the speakers in a warlike assault. But best of all are the glorious riffs — riffs for the glory of Satan — which soar and surge. The music is more triumphant and exultant in its atmosphere than dark and sinister.

After listening to “Black Devouring Flame”, I discovered that two other songs have also become publicly available — “The Sea Pt. 2” (with excellent guest vocals by Adelwolf from Nattfog) and “He, Who Liveth and Reigneth Forevermore“. The former shows a different side of Sarkrista’s artistry, a mid-paced and melancholy piece that casts a heart-aching but beautiful spell but also rocks, while the latter returns at first to a surging pace closer to that of “Black Devouring Flames“, but with a more desolate and forlorn feeling to the melody, one that becomes especially prominent in the gorgeous piano instrumental that closes the song.

All three of these songs are catchy and memorable, all of them are emotionally powerful, and all of them are well-written and beautifully performed. Can’t wait to hear the rest of this album!

As noted, Purity Through Fire will release Summoners of the Serpents Wrath near the end of this month, digitally and on CD (and LP; a tape edition will be released by Worship Tapes. The eye-catching reptilian cover image was created by Misanthropic-Art.

P.S. I’ve read an explanation by the band that, “‘Sarkrista’ comes from the German word ‘Sakristan’ and the Latin word ‘Sacrista’ which both mean ‘church-servant’ (or ‘verger’). The name was chosen because all band members thought this would be the best name to represent the blasphemous and satanic message behind Sarkrista.”

Track List:
1. Intro
2. The Lurking Giant
3. The Gathering of Blackest Shadows
4. Summoners of the Serpents Wrath
5. Ascending from the Deep
6. He, Who Liveth and Reigneth Forevermore
7. The Sea pt. 2 (My Cold Grave)
8. Black Devouring Flames
9. Rituals of Flames and Skulls