I do my best to unearth good music from bands I’ve never heard of, but I also answer the bell like Pavlov’s dog when something new comes out from a band I’ve liked for a long time. Evocation are one of those bands, a group whose music I’ve been addicted to ever since ever since their resurrection in 2007 with Tales From the Tomb. Which is why I’m kind of embarrassed by not learning of these first two songs sooner than I have. 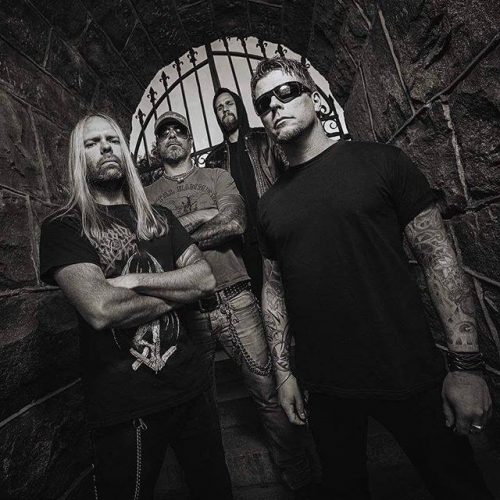 The two tracks below are “Children of Stone“, which appeared around February 1, and “The Coroner“, which appeared on February 15. Both songs are off The Shadow Archetype, the new Evocation album that will be released by Metal Blade on March 10.

It’s been a long wait for an addict, four years since the band’s last release, explained in part by the departure of two founding brothers and the integration of a new guitarist in the songwriting, plus roughly one year spent recording the album. It sounds like the wait will have been worthwhile. “The Coroner” is a grim war machine, a heavy, grinding, neck-cracking marauder with a bleak but memorable melody that becomes even more somber when the pace slows. “Children of Stone” dives even deeper into the dark, dire waters of melancholy, but also surges with feral, dramatic power.

All the performers are firing on all cylinders in these tracks, including session drummer Per Møller Jensen (ex-The Haunted, ex-Invocator). This album should be a 2017 stand-out. 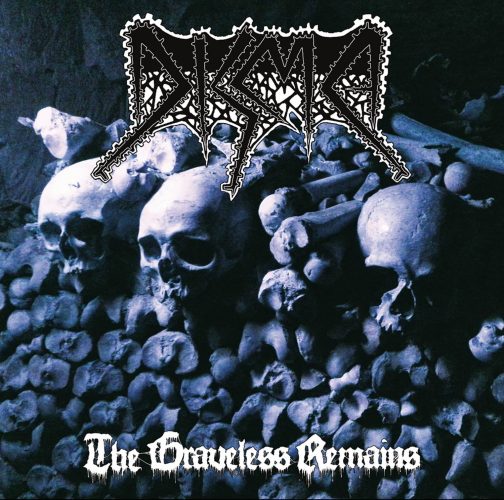 Speaking of bands we haven’t heard from in a while, New Jersey’s Disma have finally resurfaced with new music — not a new album (they’re working on it), but a 14-minute EP named The Graveless Remains, coming in late March from Profound Lore Records.

Since the band’s last release, drummer Shawn Eldridge has departed and ex-Immolation drummer Craig Smilowski has taken his place, but former Incantation members Craig Pillard and Bill Venner are still on board along with original bassist Randi Stokes.

The EP includes two songs, and what you can check out below is the title track. This is an up-tempo monster, resembling a concrete crusher operating at the speed of a tank attack, and it’s laced with dismal, doomed melodies as well as pulverizing grooves. The last minute, introduced by a gruesome bass solo, is especially merciless. Pillard’s growl, of course, is still massive.

The Graveless Remains is being released on 12″ vinyl, playable at 45 rpm; it comes with a download card. Pre-order links are below: 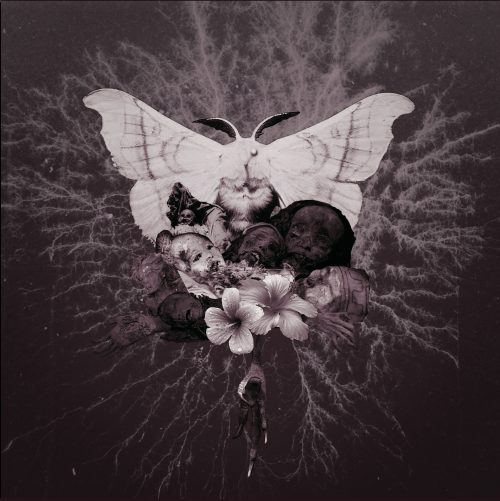 As explained here, I was blown away by the debut demo of this Finnish black metal band, Burial Ground Trance. Now Iron Bonehead will be releasing a new 7″ EP by Celestial Grave named Pvtrefactio; the release date is April 21.

One of the new EP’s two songs, “Deteriorating Angel”, can be streamed below. The sound is raw and ripping, drenched in reverb and emanating a feeling of otherworldliness at the same time as it blazes with grim and frightening ferocity. The pneumatic drumming and smashing cymbals and the absolutely wild barbarism of the vocals make the song even more electrifying, even when the pace slows from rampaging to a majestic infernal march. And there is indeed something ominously grand and majestic about the song as a whole that persists through its dynamic changes.

I’ve heard the EP’s title track as well. Its slow, haunting, funereally paced opening contrasts with the explosive finish of the preceding track, providing a chilling interlude before the song opens up into another hellish march. And when the torrent of hellfire finally does come, the band attack with cold, remorseless, demonic savagery. And the main riff that locks in for the closing minutes is a real grabber.

In short, this is a fantastic EP that manages to be both exhilarating and atmospheric, magisterial and marauding. Highly recommended. 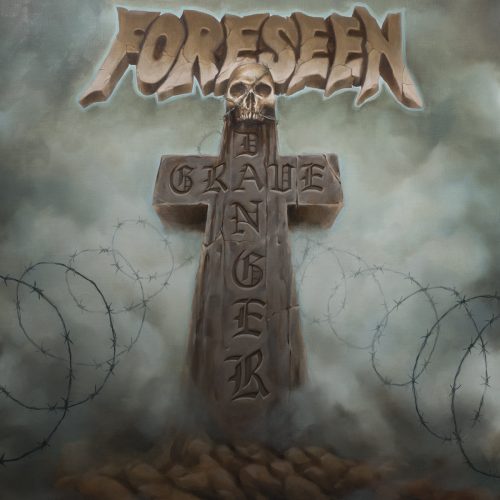 Foreseen’s 2014 debut album Helsinki Savagery was a big fuckin’ eye-opener, an absolutely electrifying (and absolutely savage) bombardment of crossover thrash. I’ve known for a while that they had a new album on the way, but it was only yesterday that an advance track surfaced — and so now I can write about it.

The new album is named Grave Danger, and it will be released on April 24 in the U.S. by that wonderful label from my home state, 20 Buck Spin, and by Svart Records in Europe. The new song is “Chemical Heritage”, and man alive, it brings enough clobbering fury and throat-slitting intensity to wake the dead. The riffs are immediately electrifying, and the song maintains that firm grip by repeatedly moving through changes in tempo and by spitting a molten solo at your face in the middle of the mayhem. The vocals (in Finnish) are also just as raw and bellicose as the galvanizing virulence of the song as a whole. Really, really good!

This new song is eclusively streaming at DECIBEL, so I need to send you THERE to listen.

In other Foreseen news, the band will be returning to the U.S. for a tour in April and May. I’m trying not to get too mopey over the fact that they won’t make it to the west coast. Here’s the schedule: 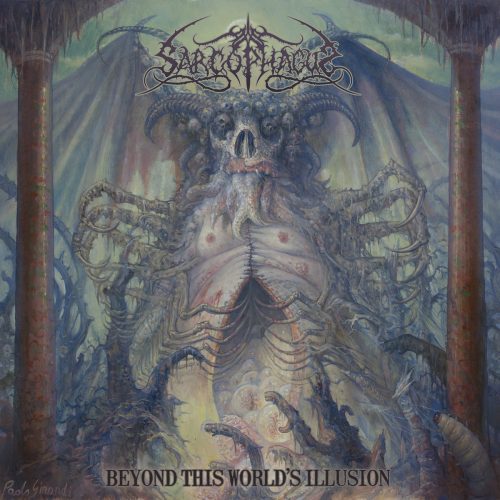 I spotted Paolo Girardi’s cover art for this album weeks ago and have been waiting since then for something to hear, and this morning the wait ended when a free track named “Reign of Chaos” appeared on Bandcamp.

The song is from Beyond This World’s Illusion, the new album by the Turkish black metal band Sarcophagus, which follows their debut full-length by eight years. The album will be jointly released on April 4 by Satanath Records (Russia), Death Portal Studio (USA), Fila Sophiae (Sweden), and Sphera Noctis Rec (Brazil).

A seam of sorrow surfaces in this song, but this isn’t a dirgelike or lugubrious affair. To the contrary, it rips, races, and thrashes, and then later hits a hard-rocking groove, propelled by a compelling drum rhythm and a riff that can’t be denied. Even more changes lie ahead, and the multifaceted nature of the song’s tempos and riffs is one of its strengths, along with the band’s razor-sharp execution and the skin-flaying intensity of the snarling vocals.

UPDATE: I just learned that another song from the album, “Ain Soph“, was released today as a video, and I’ve now included that below. 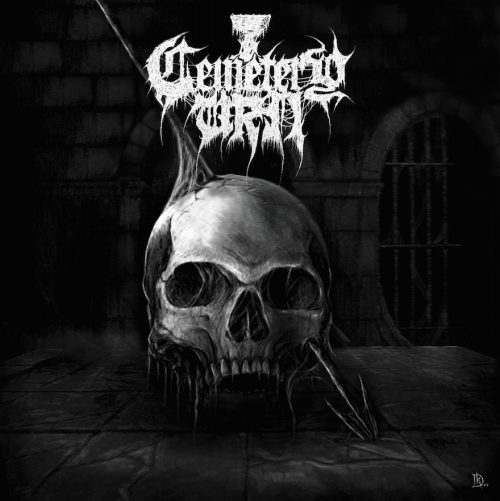 Australia’s Cemetery Urn are another band whose past works have been mighty impressive, though it’s been a long seven years since the last album. Their line-up includes current or former members of Abominator, Ignivomous, and Belligerent Intent. Their new self-titled third album, which features new vocalist Chris Volcano, is due for release by Hells Headbangers on June 9.

When a band self-title an album that’s being released fairly deep into their career, it sometimes means there has been some kind of re-set in the music. Just the passage of so much time since the last release coupled with the line-up change may be enough to mark a new beginning in this case. Whatever the reason, the first advance song, “A Requiem For Servants Aflame”, does indeed sound like a phoenix rising like a flaming rocket from the grave.

The drumming that launches the song is downright stupefying in its speed, and it comes close to stealing the show all the way through the track, but the slaughtering power of the swarming, slashing riffs stays right with it in terms of galvanizing impact. In a nutshell, this is a true black/death powerhouse, and a highly enticing teaser for the new album. 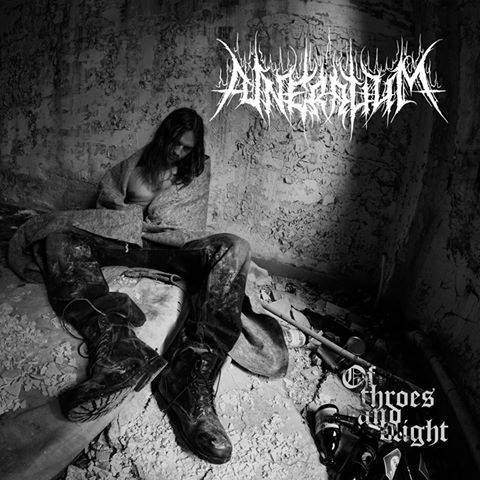 To close Part 2 of this big collection of music I have a song called  “Slowly We Crawl Towards Crumbs” by the Parisian band Funeralium. It comes from the band’s third album Of Throes and Blight, which will be released on April 12th by Weird Truth Records (CD version) and Caligari Records (tape).

Funeralium shares members with two other excellent French bands, Ataraxie and Abjvration, but this song happens to be my introduction to the music of Funeralium.

Lyrically, the song uses the futile and ultimately doomed writhings of a stubborn but wretched worm to capture the wriggling emptiness of humankind. The lyrics are quite eloquent, but absolutely depressing in the extent of their nihilism… even if they may express many truths (the lyrics can be found below the player at YouTube). As for the music itself, it’s as pitch-black as the bleakness of the words.

The voice uttering those hopeless lyrics moves between craggy, abyssal growls, grotesque roars, and maniacal expressions of intense agony, and the music… the music is mainly a blood-freezing, glacially paced earth-quaker of funeral doom despondency. A high, haunting melody sometimes drifts through the ponderous riff destruction like mist. Except for the wrenching, unhinged despair that pours from the vocals, you could easily fall into an uneasy trance in listening to it. And that’s just the first 7 minutes or so.

Yes, I suppose I should tell you that the song is more than 27 minutes long. Two of the other three songs on this 90-minute album are of similar length, with the fourth one coming in a bit under 10 minutes. And as “Slowly We Crawl Towards Crumbs” continues, it moves through soft instrumental passages of forlorn and hallucinatory beauty, tension-ratcheting expressions of unnerving emotional collapse, gloomy mid-paced stalking laced with raw, shimmering tremolo guitar, frightening juggernaut rumbling, and of course additional dirge-like segments of crushing oppressiveness bereft of even faint hope. It is a true journey through the underworld of monolithic proportions.

And man… those vocals….