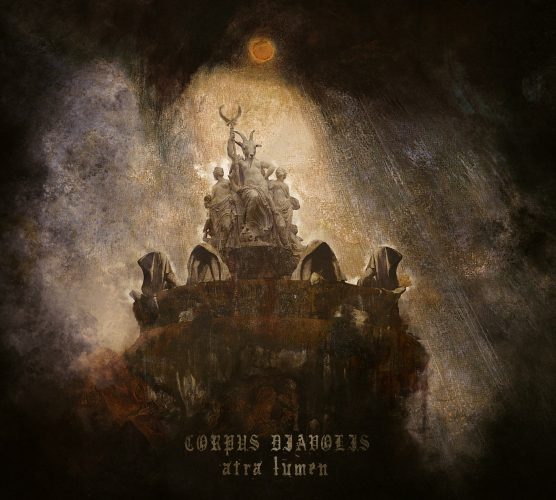 We are very pleased to bring you a full streaming premiere of Atra Lumen, the third album by the satanic French metal band Corpus Diavolis. It will be released by ATMF on April 6 of this year.

Making music that has the feeling of ritual has become one of the traditions of black metal, at least within certain circles of the black arts, and Atra Lumen has that feeling. But not all ritualistic music is alike. Where some black metal might conjure images of cavorting witchery around a woodland bonfire or huddled figures drawing blood in the glimmering candlelight of a crypt, Atra Lumen brings to the mind’s eye the ominous grandeur and majestic might of a great ceremony of praise and summoning beneath the high vault of a gothic cathedral, a ceremony surrounded by the tangible presence of death. 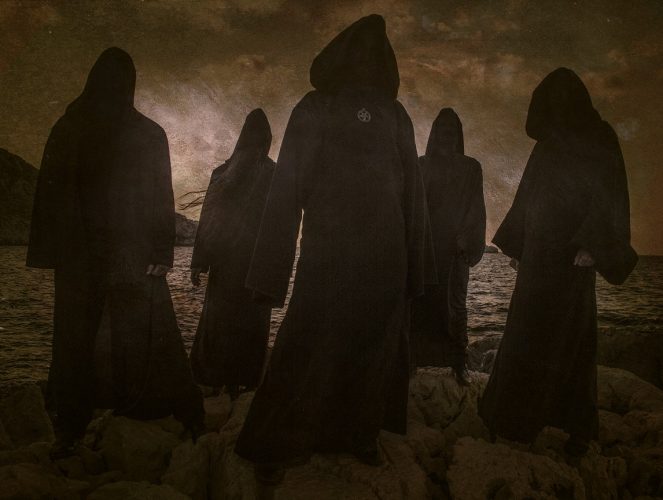 That sensation of apocalyptic drama and earth shattering evil has many sources within the music, but the power and clarity of the sound is certainly a significant one, and credit for the recording, mixing, and mastering of the album goes to Greg Chandler (Esoteric, Lychgate) who did that work at his Priory Recording Studios in Birmingham, UK.

Beyond the towering force of the sound, Corpus Diavolis have created songs with a magisterial though perilous atmosphere. Often slow or mid-paced, and solemn, the songs heave and thunder with the resonance of deep reverberating chords and the boom of crushing drum beats. There is almost as much doom in the music as black metal, the melodies just as dismal and desolate as they are dramatic.

The band also make frequent use of dissonance, the kind of dissonance that conveys feelings of unease and sickness, decay and despair, rather than alien visitations from space. Black poison courses through the veins of the music, with the high, harmonized seething of guitars adding to the music’s infernal and esoteric aura.

On the other hand, the music is not only cold, poisonous, and cloaked in stygian darkness, it also reaches heights of scorching ecstasy, manifesting the intensity of revelation and zealous praise. These eruptions of slash-and-burn savagery often come without warning, in the midst of grim and groaning processionals of funereal wretchedness and anguish — although (as befits its name) “Thy Glorification” is almost entirely incinerating. Yet these blasts of fire are still icy as well as fevered.

The harsh vocals are another noteworthy aspect of the album’s dramatic impact. They are themselves theatrical, demonic, and wide-ranging — cold, deep, tyrannical, and venomous in the music’s slower movements, and terrifyingly maniacal in those surges of swarming and blasting. To add further textures and atmosphere to the songs, angelic voices appear briefly in “Signs of the End Times”, haunting choral voices enter “Wine of the Beast”, and terrifying howls circle the doom-stricken chords near the end of “Revelations Before Dawn” like wraiths.

And in addition to a few well-chosen symphonic overlays, piano notes exert a strange attraction in “Wine of the Beast” and become the prime source of discordance and derangement in the finale of the album closer, “Sick Waters”.

All in all, Atra Lumen is an impressive, engrossing, and unsettling pageantry of dread and delirium. Enjoy the stream below

Atra Lumen will be released in a digipak format with an extensive booklet, limited to 400 copies. For further info and to pre-order, go here:

One Response to “AN NCS ALBUM PREMIERE (AND A REVIEW): CORPUS DIAVOLIS — “ATRA LUMEN””