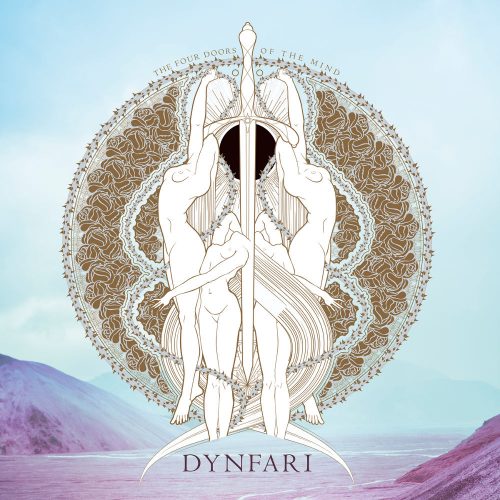 In the years that have passed since the Icelandic band Dynfari released their debut album in 2011, Icelandic black metal has soared to global prominence. Since then Dynfari have expanded from a duo to a full band and have released two more albums, and now a fourth full-length entitled The Four Doors of the Mind is set for release on April 14th by Code666. It will further burnish the reputation of the band’s homeland as a source of compelling black metal.

What we have for you today is a single from the album named “Sorgarefni segi eg þér“, as well as insights about the album from Jóhann Örn, the band’s singer and one of its guitarists. 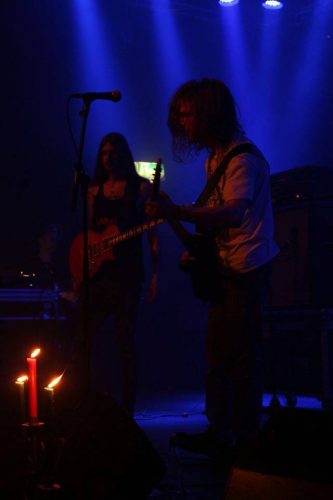 The music explores themes of pain, madness, and death, but lyrically approaches the subjects in a way different from most heavy metal. As Örn explains:

“[I]nstead of depicting pain, madness and death as something ugly or morbid, it is construed as something beautiful and important. Some would say that it’s counter-intuitive that the first half of the album includes the most obvious black metal influences, while that part deals with the doors of sleep and forgetting, while the more mellow, beautiful second half is about madness and death. But it is quite logical and intentional. While sleep and forgetting are the first reactions to pain, sometimes they are not enough, and pain is still thriving. In such circumstances, it is not until you reach the doors of madness and death where you will ultimately find peace.”

But these concepts are not the only unusual aspect of the album’s lyrics. The source materials are themselves unexpected.

“Of course, the core of these ideas on the album’s concept are not mine, but a combination of two sources. Firstly, the poetry of early 20th century Icelandic existentialist Jóhann Sigurjónsson, and secondly contemporary fantasy writer Patrick Rothfuss’ theory put forth in his novel The Name of the Wind.

“Coincidentally, the archaic word “Dynfari” is a name for wind or storm. Furthermore, the Icelandic poet Jóhann Sigurjónsson has the same first and last name as myself. Seeing the similarities in comparing his poetry to the idea in Rothfuss‘ book, it just seemed too much of a coincidence not to do anything with it.

“The music we were creating at the time was very much in tune with these musings and heavily related to my personal state of mind. So as I was finding it difficult to relate my own writing at the time to our music, this seemed to fit so perfectly that it was impossible to let it go.”

Before we get to the music we’re premiering today, it’s also worth mentioning that Örn has his own personal reasons for devoting Dynfari’s music to reflections about pain:

“The truth of the matter is that I was diagnosed with an autoimmune disease and as a byproduct of it and its treatments I have endured pains that some medical experts describe as more painful than childbirth. I am quite healthy now, having found the right balance between three different kinds of medication. But I have found it difficult to not relate my music creation somehow to this fact and the philosophical mind games it induces.

“Even in the wake of intense pain, it is the battle against your mind that is the most challenging one. The battle for positivity is a constant one — and it is just a little bit funny that one of the most successful strategies on that battlefield, I’ve found, is accepting your fears, accepting your fate, and believing that while the current situation may be beyond bloody shitty and intense, there is ultimately peace to be found. It is the only thing that is certain. No matter what.”

“Sorgarefni segi eg þér” is the third of eight tracks on this new album. With vocals that range from clean to wrenching and incinerating, it’s a captivating blend of atmospheric black metal and elements of post-metal, moving between different levels of intensity, capturing both the gloom and the beauty of clouds moving across the peaks and icy waters of ancient fjords, as well as emotional torment. It surges powerfully, the guitar melodies ringing out with urgency and vibrancy, but in its slower phases it becomes self-reflective and sorrowing, a hypnotic lament, and the picking of an acoustic guitar draws the song to a close.

The Four Doors of the Mind will be released on April 14th in both vinyl and CD editions, as well as digitally. It features cover art by Metaztasis. To pre-order the album, go HERE.