Prosthetic Records recently announced that they would be releasing the debut album Strike Mortal Soil by Vancouver, BC’s Wormwitch on May 12. Almost exactly one year ago we premiered a video for a single the band released called “Coffin Birth”.

The original Wormwitch trio were former members of a hardcore band named Dead Hand who took a sharp turn toward black metal, but without completely severing their punk roots. Both the song “Coffin Birth” and the video for it produced a huge adrenaline rush, and ever since experiencing both of them I’ve been anxious to hear what the band would do next. Very cool to see that we’ll be finding out very soon.

1. As Above
2. Howling From the Grave
3. Weregild
4. Even the Sun Will Die
5. Relentless Death
6. Cerulean Abyss
7. Everlasting Lie
8. …And Smote His Ruin Upon the Mountainside
9. Mantle of Ignorance
10. So Below 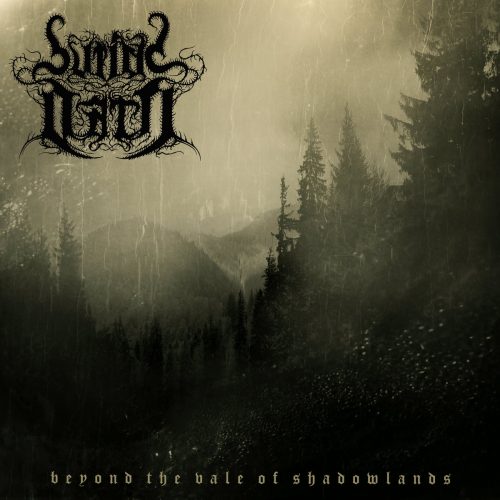 Now we move to new music, beginning with the first two available tracks from Beyond the Vale of Shadowlands, the debut album by the Cleveland black metal band Burial Oath, which is due for release on April 7.

The first of these is “Womb of Cosmic Bane“, and the second (which recently premiered at Worldwide Underground) is “Sol Av Svart“.

In its slower movements, “Womb…” is as pestilential and morbid as a city laid waste by the black plague. The beat of the tom drum booms in your ears, a wraithlike melody surfaces and submerges and begins burrowing under your skin, a ghastly vocal horror claws at your throat. And when the pace accelerates, the music becomes a romping demonic frenzy.

“Sol Av Svart” is a racing war charge right from the start, but a highly infectious, hard-jabbing riff enters the picture, too. Burial Oath slow this one down in the middle, bringing the stench of death with them when they do, but end it with a high-octane reprise of the barbarous opening sections.

This is sulphurous black metal with a lot of primal, savage appeal, and hook-laden riffs that have pulled me back to the songs repeatedly. You can pre-order on CD or digital at Bandcamp: 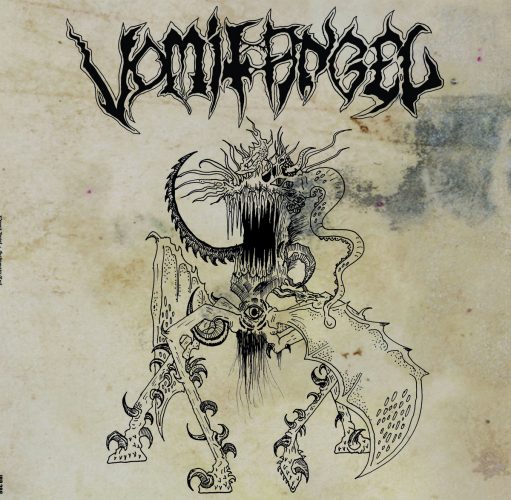 Now we come to the first full release in this collection, the debut EP of the Danish duo Vomit Angel. Sadomatic Evil is the name of this foul and pheremone-fueled fusillade. It was released in mid-February by Iron Bonehead Productions.

The two members of Vomit Angel, Necrodevil and Lord Titan, aren’t newcomers, having been founding members of Sadogoat, which later became Sadomator. Their debut as Vomit Angel discharges 8 tracks in 19 minutes, and it’s one hell of a hellish ride.

You’re probably expecting a lot of bestiality and filth from what I’ve told you so far, and the music is definitely primitive and ugly, but man, the songs are also highly addictive. There’s a deep, gut-punching tone to the drums and the bass, and the riffs are coated in distortion in a way that makes them sound… festering and foul. The combined effect is like some big, corroded steamroller that’s also part jackhammer.

The band also spice up the music with… cowbell… and a 24-second romp named “Cotard”… and a lot of rhythmic variety, including a healthy dose of feral punk ass-kickery, some dirge-like crawling, and eruptions of outright mayhem. The vocals sound like a hybrid of crocodile and wolf, feeding and vomiting. And the riffs hit the reptile part of the brain like a spear. 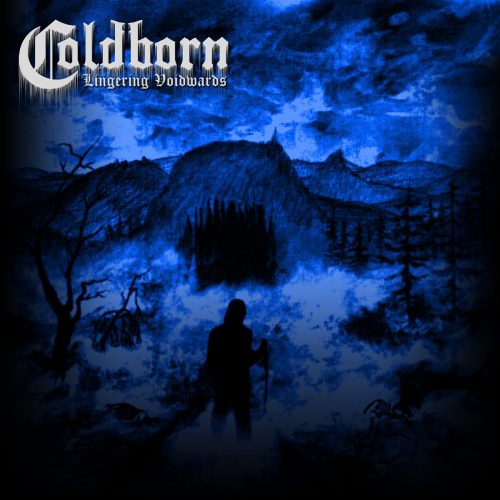 In last week’s edition of SHADES OF BLACK, I included the excellent new split release by Grimfaug and Onirik. The driving creative force behind Grimfaug is the Belgian musician Norgaath. He also performed on the Onirik side of that split and he is a member of Nightbringer as well as one of the musicians in Striid.

Norgaath also has a solo project named Coldborn that released a debut album named Lingering Voidwards last December through Final Sacrifice Records, and that’s the next musical offering in this SHADES OF BLACK collection. As on the Grimfaug tracks from the split with Onirik, session drums were performed on the Coldborn album by the Portuguese drummer Menthor (Enthroned, Death Like Mass, Nightbringer, Lvcifyre, Bestia Arcana, etc.).

Lingering Voidwards consists of five long songs, none of them shorter than eight minutes, and the opener nearly reaching 13. The music is both entrancing and unearthly, frightfully chilling and maniacally ferocious, majestic and despairing. Although it often does create the sense of falling endlessly into a lightless void that extends beyond the bounds of reality, there are melodies in the music that are sublime, to the point of becoming incandescent, like the shimmer of phosphorescence in a limitless sea of night.

The music is almost constantly in flux, ebbing and flowing in its energies. Vast, sweeping passages of spectral ambience mesmerize the mind while torrential assaults of blasting percussion and whipping riffage get the adrenaline flowing. Doom-shrouded dirges and depressive melodic refrains coexist with chiming arpeggios, somber piano solos, and bursts of intense energy that strike like heat lightning. It’s an intricately plotted pageant of changing moods and changing tempos, a richly textured soundscape of damnation and exultation, desolation and beauty.

The vocals are almost as varied as the instrumental music, ranging from ugly, grating growls to agonized shrieks, from ominous, abrasive chants to wrenching cries of superheated passion.

In a nutshell, this is an intense, ambitious, and imaginative album, and one that I found completely enthralling. 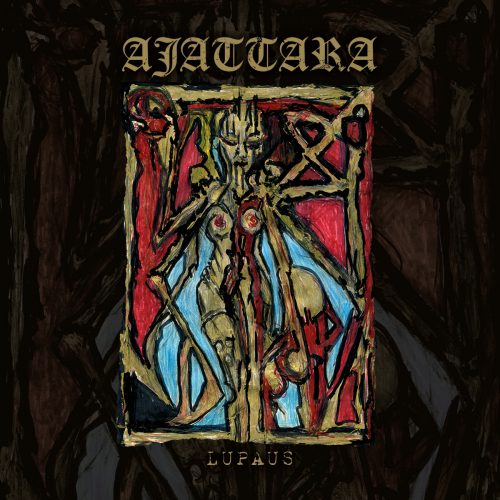 To conclude, here’s the promised video, which premiered at DECIBEL last week. The video is for a song named “Ave Satana” by the Finnish band Ajattara, and it will appear on the band’s new album Lupaus (their ninth album), which is set for a May 12 release by Svart Records.

Six years have passed since the last time I wrote about this band at NCS, and there’s a good reason for that: The band’s last album Murhat was released six years ago. Why it has taken so long for the band to record a new one is a question I can’t answer, but I suppose it doesn’t really matter. What matters is that “Ave Satana” rocks really fucking hard.

The ballsy stomp of the song is massively infectious, and the whipping frenzy of the song puts a fever in the blood. And on top of that, there are some enticing melodic leads and some utterly deranged vocal ferocity. The video… well, I’ll just let you experience it without me spoiling any surprises.

You can pre-order Lupaus here.