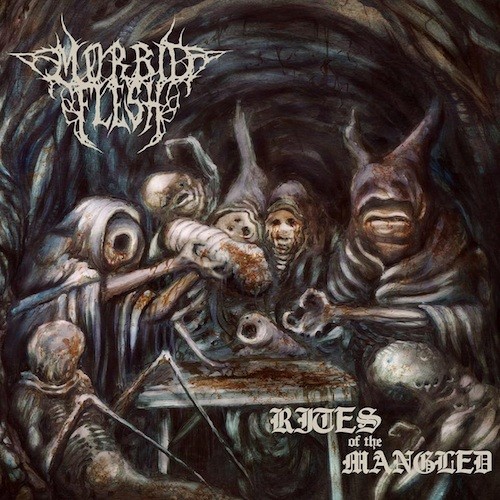 We discovered the Spanish death metal band Morbid Flesh in 2014. During that year we had the pleasure of premiering a stream of their EP Embedded In the Ossuary, which was a stunningly accomplished infliction of death metal cruelty and pestilence in the old Swedish style. Morbid Flesh are now returning with their second album, Rites of the Mangled, which will be released by Unholy Prophecies on April 24. We have already vomited our enthusiasm for one track from the album (“Circle Cursed”), and now it’s our ghoulish pleasure to bring you a second one — “Heretics Hammer“.

“Circle Cursed” was perhaps less an example of classic Swe-death than a firestorm of disease and destruction, its riffs and pacing turning from rapacious savagery to festering decomposition, and back again. And you’ll get a good headbang going as the song romps and gallops. What then does “Heretics Hammer” hold in store for you? 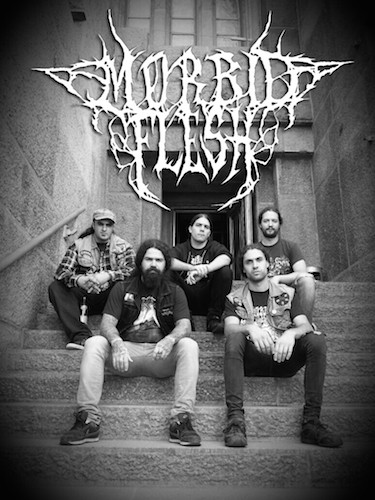 The first sign of the song’s hellish power comes through a truly foul blast of horrifying vocal vomit — and if you haven’t heard Morbid Flesh before, you’d better get used to it, because the cavernous, inhuman vocals are one of the album’s terrifying strengths — but certainly not the only one. The vocal assault is backed by head-hammering percussion and malignant riffing — and then the song begins to morph (as they all do). This dynamic track includes d-beat rampaging with the destructive force of some tank battalion charging straight from the gates of hell, pulsating berserker riff frenzies, a slow thunderous march with a solo that oozes disease, grim lurching horrors, and at the end, a mournful dirge that conveys all-too-human grief.

Morbid Flesh pay their deepest respects to the old ways of death fucking metal, but they do it with such flair and force that their music breathes new life into this old corpse.

Rites of the Mangled was recorded, mixed, and mastered by the masterful Javi Felez at his Moontower Studios in Catalonia. It features guest appearances by Blasphemic Vomitor from Insulters, Xavi of Tort, and Xavier from Ósserp and Crani Septic. To pre-order, visit this location:

Enjoy “Heretics Hammer” below, along with the previously released “Circle Cursed“.