“It’s so very satisfying to come across a piece of metal extremity that succeeds on multiple levels, one that’s deeply (and ominously) atmospheric and yet also vigorously bends your neck to its will”. That’s what we wrote about “Ekphora’s Day“, a song that we premiered last month from Seal of Phobos, the new EP by the Italian death metal band Valgrind. And those same words hold true for the song from Seal of Phobos we’re bringing you today: “New Born Deceit“.

This new song is a remarkable mix of gut-churning physicality and off-planet exotic allure. It’s brutal and heartless, full of predatory chords and the kind of ravenous voice that hungers for your liver, and it’s driven by demolishing drumwork. The music romps and rampages, but there’s another dimension to it as well, one that’s vertiginous and alien. 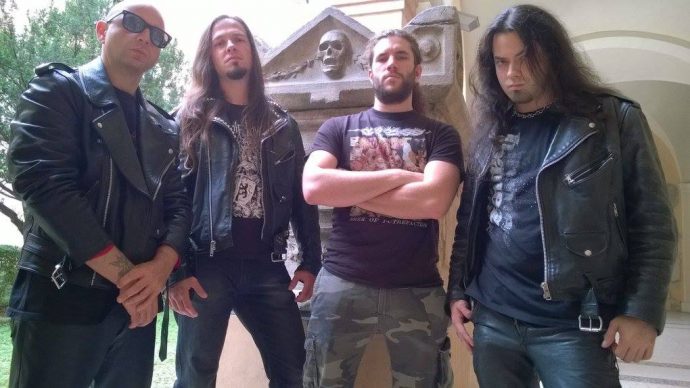 Slithering guitar leads that don’t seem healthy; a solo that’s echoing and acidic, with a seemingly extraterrestrial origin; another solo that flashes like a cosmic event, spectral and spacious and spearing — all these other ingredients give the music a chilling, brain-twisting aspect, an unsettling eeriness to accompany the brute-force plundering and viciousness. Check it out below, along with a stream of that previously released track, “Ekphora’s Day“.

The cover art for Seal of Phobos was created by Valgrind’s vocalist/bassist Daniele Lupidi. Each song on the EP will reflect a different vocal approach, giving each one its own identity, and thus includes guest growls by Jonny Pettersson of Wombbath, Ashcloud, and Henry Kane. It also includes the first studio appearance of the band’s new guitarist, Umberto Poncina, who also engineered and mixed the EP .

Seal of Phobos will be released by Everlasting Spew Records on April 14th. Pre-orders (which include a special price until April) are up now and accessible through the links below.