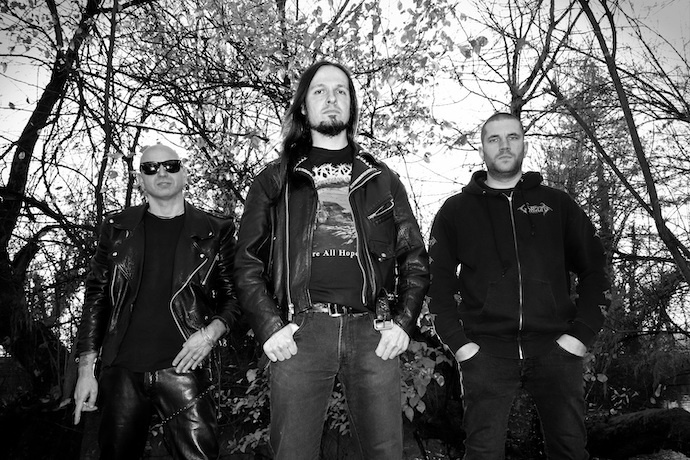 We’ve been following the music of the Italian death metal band Valgrind for many years, and for good reason. But if you happen to be discovering them for the first time, despite how often we’ve written about them, they released four demos and an EP between 1995 and 2002 — and then seemed to go into hibernation until the appearance ten years later of their debut album, Morning Will Come No More. Another four years passed, and then Valgrind’s second album, Speech of the Flame, was released by Lord of the Flies Records. The wonderful 2017 EP Seal of Phobos tided over Valgrind fans until the 2018 appearance of the next album, Blackest Horizon, via Everlasting Spew Records.

And then last year brought us a new full-length, Condemnation, which was released in July through the Spanish label Memento Mori, who rightly characterized the record as “poignant, crushing and classy”. It was further proof of what the band’s discography had already revealed, i.e., that Valgrind aren’t content to remain stuck in one place. Even after all this time, they have continued to evolve, to challenge themselves, and to let their interests and ambitions lead them to create music that’s mentally and emotionally engrossing for listeners — as well as frequently eye-popping in its ferocity.

And now Valgrind will be independently releasing a new EP named From the Viscera of Darkness, and today we’re pleased to present a video for the title track. END_OF_DOCUMENT_TOKEN_TO_BE_REPLACED 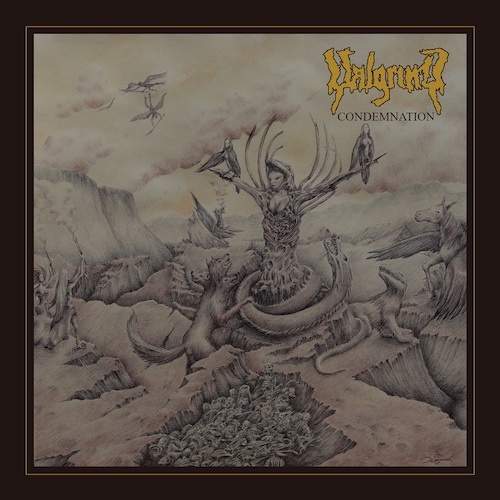 Let’s cut right to the chase and then come back and fill in some important details.

Today we’re premiering “Divination – Marked By the Unknown“, a tremendously good and abundantly multi-faceted song off the new album by the fascinating Italian death metal band Valgrind. Its introductory phase is mysterious and mesmerizing, with ringing notes rippling across a shimmer of wondrous ambient sounds. That lasts almost long enough to cast a spell — but its entrancing effects are abruptly cut short by a Vesuvius-like eruption. END_OF_DOCUMENT_TOKEN_TO_BE_REPLACED

To begin, we’ll throw your brain into a blender set to puree. “Building A Shrine Upon Vanishing Sands” is a brutalizing, electrifying, high-speed carnival ride. The percussive power of the song is punishing, and the vocals (also discharged at high speed) are rabid, while the darting and swirling fretwork is wild and exultant. The guitar soloing is nothing short of spectacular, and propels a song that was already an ecstatic thrill-ride way up into the stratosphere. If the track doesn’t leave you with an ear-to-ear grin, the virus may have mutated and given you facial paralysis. END_OF_DOCUMENT_TOKEN_TO_BE_REPLACED 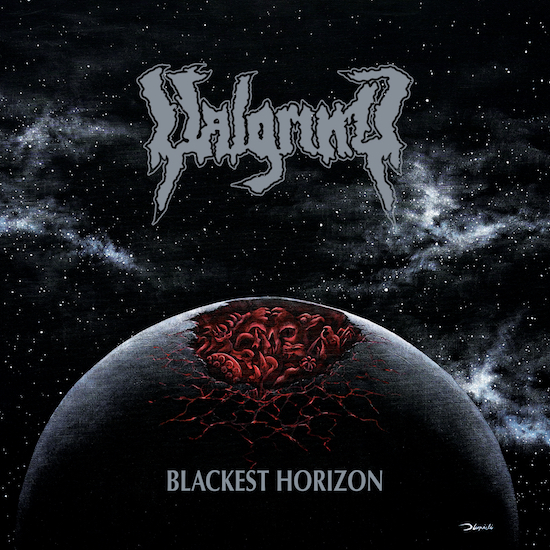 On the 25th of May, Everlasting Spew Records will release Blackest Horizon, the third album by the Italian death metal band Valgrind (named for the ancient gate that stands before the great hall of Valhalla in Norse mythology), which follows the band’s tremendously good 2017 EP, Seal of Phobos. Last month we brought you the album’s victorious opening track, and today we present another. This one — “Last Angel (Into the Unknown)” — begins a trilogy of songs that end the album.

That song we shared previously — “Victorious” — launches the album in extravagant fashion, delivering a kaleidoscopic aural experience that’s hallucinatory, heart-pounding, mind-bending, savage, and exuberant to the point of madness. The one you’re about to hear is no less fascinating. END_OF_DOCUMENT_TOKEN_TO_BE_REPLACED

Last year we had the fiendish pleasure of premiering two tracks off the Seal of Phobos EP by the Italian death metal band Valgrind. That was a remarkably multifaceted EP that succeeded on multiple levels, but it still may not be adequate preparation for what the band have accomplished on their new third album, Blackest Horizon, which will be released by Everlasting Spew Records on May 25th. But the song we’re presenting today provides a better sign — one that blazes like some widescreen neon billboard flashing with a thousand colors.

This new song is named “Victorious“, and it is indeed victorious — a kaleidoscopic aural experience that’s hallucinatory, heart-pounding, mind-bending, savage, and exuberant to the point of madness. END_OF_DOCUMENT_TOKEN_TO_BE_REPLACED

“It’s so very satisfying to come across a piece of metal extremity that succeeds on multiple levels, one that’s deeply (and ominously) atmospheric and yet also vigorously bends your neck to its will”. That’s what we wrote about “Ekphora’s Day“, a song that we premiered last month from Seal of Phobos, the new EP by the Italian death metal band Valgrind. And those same words hold true for the song from Seal of Phobos we’re bringing you today: “New Born Deceit“.

This new song is a remarkable mix of gut-churning physicality and off-planet exotic allure. It’s brutal and heartless, full of predatory chords and the kind of ravenous voice that hungers for your liver, and it’s driven by demolishing drumwork. The music romps and rampages, but there’s another dimension to it as well, one that’s vertiginous and alien. END_OF_DOCUMENT_TOKEN_TO_BE_REPLACED

It’s so very satisfying to come across a piece of metal extremity that succeeds on multiple levels, one that’s deeply (and ominously) atmospheric and yet also vigorously bends your neck to its will. And that’s what Valgrind have done with the song we’re about to premiere — “Ekphora’s Day“.

The song comes from this Italian death metal band’s new EP, Seal of Phobos, which will be released by Everlasting Spew Records on April 14th, and it includes guest growls by Jonny Pettersson of Wombbath, Ashcloud, and Henry Kane, as well as the first studio appearance of the band’s new guitarist, Umberto Poncina, who also engineered and mixed the EP . END_OF_DOCUMENT_TOKEN_TO_BE_REPLACED

I learned of the new album through a Facebook friend who described their music with references to bands like Morbid Angel and Deicide. Although I haven’t heard the whole album, the two songs that are available for streaming sound damned good. END_OF_DOCUMENT_TOKEN_TO_BE_REPLACED