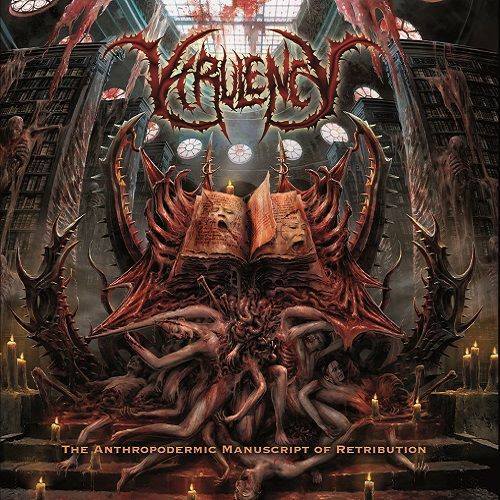 (In this post our friend Vonlughlio (Blast Family and Reign of Death) reviews the new album by Virulency from The Basque Country.)

Here at NCS we premiered the song “Myriapod Constructology I” in early January, and last week Islander included Virulency’s full stream of their debut album The Anthropodermic Manuscript of Retribution.

So I was given the opportunity to give my thoughts on what happens to be my favorite BDM release so far in 2016. I know it’s early, but have to say that the album has been constant in my playlist.

As mentioned in the earlier posts, the band is from The Basque Country of Spain and formed around 2011, the year in which they released a two-song promo. The following year they released their EP Unbearable Martydom Landscapes. I must admit that when I heard about the band in 2013, I only heard a song from that EP, which I liked, but I never managed to listen to all the songs. It was when New Standard Elite signed them that I bought a copy of the EP (shame on me). Once I gave that release a proper listen, I understood why the best label in the genre decided to signed them. END_OF_DOCUMENT_TOKEN_TO_BE_REPLACED

I learned of the new album through a Facebook friend who described their music with references to bands like Morbid Angel and Deicide. Although I haven’t heard the whole album, the two songs that are available for streaming sound damned good. END_OF_DOCUMENT_TOKEN_TO_BE_REPLACED

We’ve got the premiere of a song from the album for you today. You’ll need to take a deep breath before you say the name out loud. The song will also knock the wind out of you. “Myriapod Constructology I” is the name of the track. END_OF_DOCUMENT_TOKEN_TO_BE_REPLACED

And the song itself is a blast furnace of brutal death metal, with bone-cracking/gut-slicing riffs, high-velocity percussion, and a high-low tandem of guttural roars and hair-on-fire shrieks. The phrase “takes no prisoners” comes to mind. END_OF_DOCUMENT_TOKEN_TO_BE_REPLACED