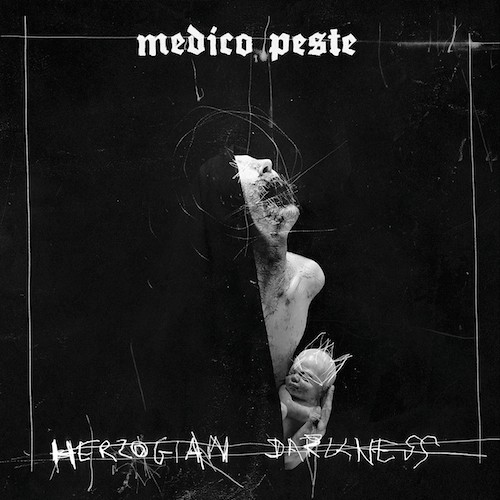 Medico Peste are human beings (I presume, but cannot be sure) who have mastered the art of creating music that appears to be a gateway for the emergence of inhuman forces.

Discordance and delirium reign on their new EP, Herzogian Darkness. The music seethes with arcane energies, creating an experience that is terrifying and hallucinatory — and so intricate, so different, so highly accomplished, and so unnerving that it rooted this listener in place as if turned to stone.

To help you gauge its on effect on yourself, I’m including a full stream of the EP at the end of this review; it was released just yesterday by W.TC. Productions. 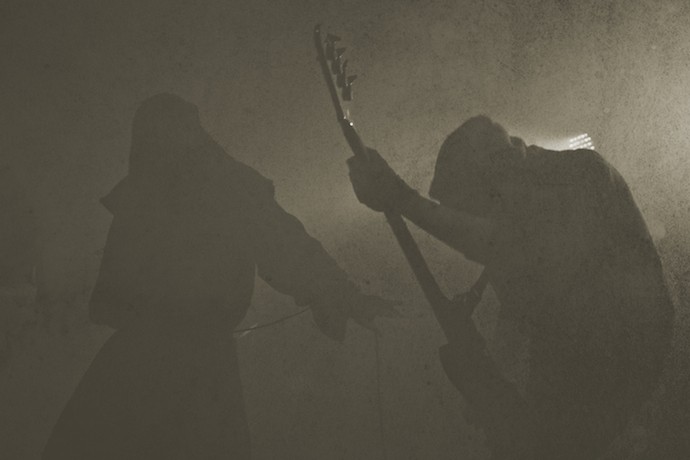 Press reports disclose that Medico Peste took shape in Krakow, Poland, in the winter of 2010. The next year they released a demo (Graviora Manent), and then their first album, א:Tremendum et Fascinatio, in 2012. Those of you who were fortunate enough to witness Mgła’s U.S. tour in 2015 saw members of Medico Peste, though you may not have known it, since they were part of Mgła’s live line-up.

Medico Peste display their manifold and mysterious talents across four tracks on this new release, three of them original works and the final one a cover of “Stigmata Martyr” by Bauhaus (which may not be as strange as you think once you’ve heard the EP). The title track includes guest vocals by Mark of the Devil from Cultes Des Ghoules.

The title track, which falls just short of 10 minutes, is stunning. It seethes and boils at first, like a brew of poison and blood, and then the chaos becomes rampant, exploding with fierce, delirious energy. Something that sounds very much like a saxophone, but is probably just an ingenious guitar effect, adds its own deranged voice to the cyclone of derangement.

When the pace slows again into a dirge-like stagger, the song becomes horrifying, the music laced with abrasive chords that ring like a hellish trumpet of doom, and the percussive rhythms battering the listener in a sequence of smashing blows — and then it gouges the mind with groaning and shrieking feedback. 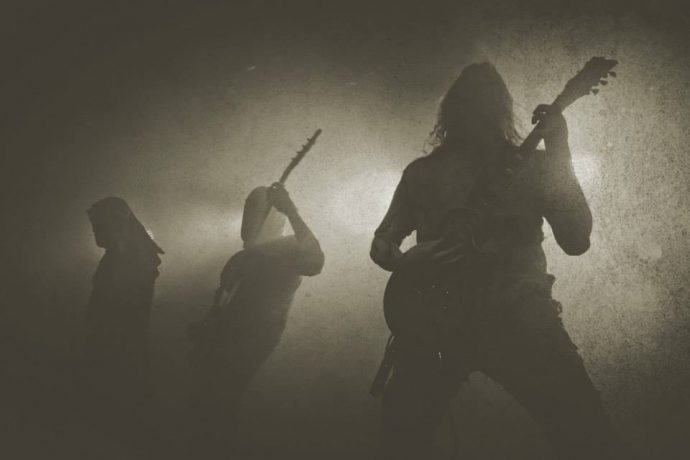 I confess that I’m unable to capture the sheer inhuman insanity of the voices in this song (and the others). Throughout the EP, crazed howls mix with maniacal proclamations and inflamed cries of ecstasy. Violence blazes from this throat, and pandemonium, the products of a mind that seems to be splintering and self-immolating at the same time.

“Hallucinating Warmth and Bliss” is a long track, too, and it features a punchy, rocking rhythm (as well as blazing drumwork) and some of that enthralling pulsation of guitar and bass I mentioned earlier, but it’s still deeply arcane and vividly crazed.

“Le Delire De Negation” is much shorter than the first two imposing tracks, which is probably a good thing. It’s searing, dissonant, and harsh, but the deep thrum of the bass gives it an almost swinging motion. The twisted lead guitar twines itself around the mind like a vine.

And having come this far, you’re rewarded with that ingenious cover of “Stigmata Martyr” – a much heavier and more abrasive version than the one Bauhaus recorded, but one that preserves the compulsive beats and gloomy hooks of the original.

When all is said and done, Herzogian Darkness is a masterful and multilayered achievement, glorious in all its harrowing hellishness and terrifying derangement. A challenging listen, to be sure, but one that you won’t soon forget.

Herzogian Darkness was recorded, mixed, and mastered at No Solace Studio by Mikolaj Zentara. (Mgła’s M.). The creepy cover design and other artwork for the EP was made by BFV/Inside Flesh. The EP is available here: