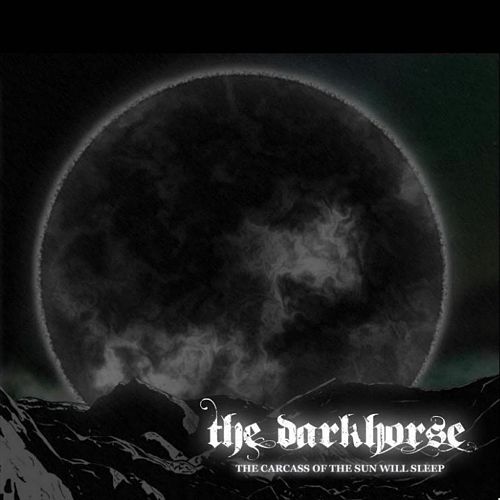 (Andy Synn brings us a trio of reviews of new releases by The Darkhorse, Mountains Crave, and Ancient Ascendant.)

Ah yes, it’s finally time for the first in what I hope will be several pieces collecting the best Metal which these fair isles have to offer in 2017.

As always, the three bands I’ve selected each offer a very different take on the metallic fundamentals, from the swaggering stomp of The Darkhorse, or the sweeping blackened grandeur of Mountains Crave, to the rifftastic rampage of Ancient Ascendant, meaning there should be something here for everyone (or, at least, for most people) to really sink their teeth into! 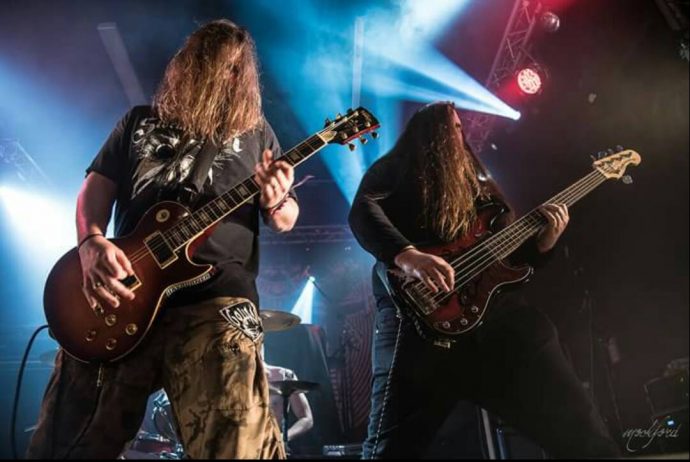 THE DARKHORSE – THE CARCASS OF THE SUN WILL SLEEP

Speaking of things you can get your teeth into, the riffs on this album are so thick and meaty that you can practically chew on them, and every song is a prime cut of gargantuan grooves and gruff, guttural vocals, all marinated in a high-proof blend of sludgy molasses, and with more than a hint of fiery Hardcore spice to give it an extra kick.

Things immediately get down and dirty with “Dying Is The Only Cure”, which delivers a bruising dose of mammoth, bone-jarring riffs and ballsy, bluesy, sludge, while vocalist/guitarist Barry Groome spits his pissed-off, politicised invective through clenched teeth, after which the stuttering crunch of “741” finds the quartet (completed by co-guitarist Jamie Darnell, bassist Daniel Groome, and drummer Mat Ward) going even harder than they did on the opener, all tight, toughened riffery and rapid-fire, snare-heavy fills.

“March of the Infected” builds from a creep-tastic intro into a hard rockin’, hard fightin’, hard groovin’ chug-athon with a fantastically infectious (pun intended), and brilliantly simple chorus refrain of “They’re coming for us!”, while “Hecatomb” goes for a much more aggressive approach – all sharp, staccato percussion and pounding, sledgehammer guitars, with just a smidge of moonshine melody to sweeten the deal – and “nemA” (read it backwards) has a certain head-banging, hip-shaking swagger to it reminiscent of much-missed US-groovebringers The Showdown, delivering an impressively addictive shot of rough-hewn riffs and high-proof hooks.

The relentless “Dead Crows” bears down on you with a sense of utterly unstoppable momentum, the brutally belligerent vocals of the two Groome brothers breathing fire and brimstone atop a mountain of molten metal riffs and writhing, snakebite melodies, followed by the electric “We Fear None But Our Own”, which increases the pace and ups the aggression levels significantly leading into spine-busting closer “Congratulations, You’ve Survived the Human Cull”, which brings the album to a close in fittingly catchy, yet crushing, fashion.

Definitely check this one out next time you’re in the mood for some dense and delicious morsels of metallic meat. You won’t be disappointed.

The Carcass of the Sun Will Sleep is out now via by Attic Records. 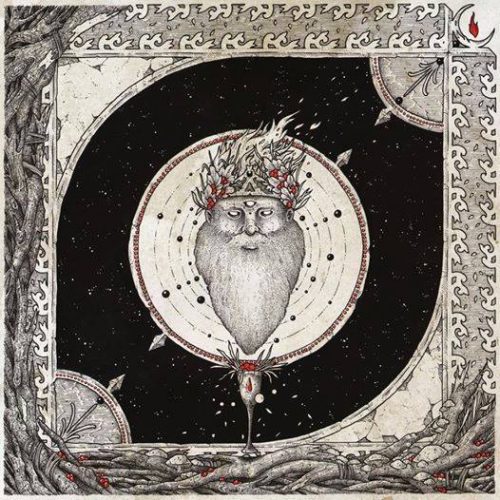 MOUNTAINS CRAVE – AS WE WERE WHEN WE WERE NOT

Despite comprising musicians from a number of storied/celebrated British Metal bands, Mountains Crave is not so much a “supergroup” as it is a vehicle to allow the various members involved to express themselves and to explore the more atmospheric, and introverted, side of their nature.

Across six scintillating tracks, beginning with the bleak beauty of “Ynisvitrin”, which wanders and winds its way through multiple passages of sombre melody and moody, metallic melancholy over the course of its nine-minute run-time, the quintet offer a bracing mix of furious intensity and brooding introspection, capable of switching from a searing, blasting blitzkrieg to a solemn, atmospheric interlude or a driving, melodic march, without ever losing the thread of their own identity along the way.

Track two, “Istigkeit (We Saw Them Of Old)”, has a classic Black Metal vibe to it without being self-consciously retro, the song’s eloquent mix of ferocious drums and desolate riffs augmented by swathes of grandiose keys and weaving melodic tremolo lines, immediately giving it a timeless appeal to any true fan of the genre.

“Clear Light of the Void” begins with several minutes of glowing, glistening ambience and atmosphere, which eventually gives way to a furious torrent of blackened guitar work and barbarous vocals (a mix of glass-chewing snarls and gut-wrenching lows), while “Arise O Magnificent Sun” kicks in straight away with a veritable deluge of seething melodic riffery before slowly developing in a much more enigmatic and multifaceted fashion, incorporating a host of gloomier, doomier parts, supple acoustic interludes, and the occasional eruption of scalding extremity.

The penultimate title-track offers a soothing passage of calm and clarity before the might and majesty of “Theophany” – nine minutes of scything guitars and chilling atmosphere, splintering drums and anguished, cathartic vocals (including some perfectly placed clean vocals during the track’s phenomenal finale) – brings the album to a prodigiously powerful close, wrapping up the whole package with a final fantastic flourish.

Fans of classic Emperor, mid-period Enslaved, and early Wolves In The Throne Room should find a lot to love here, make no mistake.

As We Were When We Were Not will be released by Avantgarde Music on May 13. 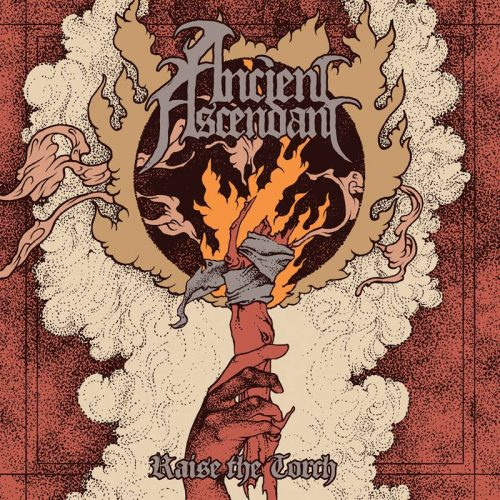 Hands up who has heard of the term “hybrid vigour” before? Ok, a couple of you, that’s good.

For those unfamiliar with the term, it refers to “the improved or increased function of any biological quality in a hybrid offspring.” Basically it’s why, if you’re planning on getting a dog, you’re probably better off getting yourself a proper mutt, one with a mix of all different characteristics, rather than a so-called “pure breed”, as they’re just generally healthier, happier, and hardier creatures.

In fact the diverse nature of the band’s DNA is more apparent than ever on Raise the Torch, incorporating genetic strands from classic Thrash, Black Metal, Death ‘n’ Roll, and even some strutting ’80s Hair Metal swagger, resulting in a sound that’s part Entombed and part Enslaved, part Metallica and part Mötley Crüe… and all sorts of awesome.

Following the surprisingly downbeat intro of “Reawakening” the quartet go big with the interweaving leads and melodies which kick off “Our Way”, before settling into a stomping groove (perfect for head-banging and hell-raising) which eventually builds into the first of the album’s many preposterously extravagant solo sections.

The Skeletonwitch-esque blend of classic Metal guitar work and modern heaviness which underpins “Scaling the Gods” makes for a frankly irresistible combination, mixing and matching fret-burning leads and bombastic, infectious riffs with almost reckless abandon, while the pavement-pounding pummel of “Unearth” is as brash and as bullishly brilliant as they come, keeping a martial, marching pace throughout that will give your neck a serious workout.

Things pick up with the blasting intensity and melodic menace of “Carnal”, which puts a blackened spin on some of the band’s old-school influences, although the multi-layered “Foreign Skies” slows things down again a little with its incorporation of some surprisingly poignant progressive passages in amongst the usual cavalcade of righteous riffs and red-hot hooks.

Speaking of hooks, “Grasping the Torch” is an obscenely catchy slab of blackened, death-tinged cock rock, with a chorus that’s absolutely screams “stadium level”, while the bass-led, blast-fuelled sturm und drang of “The Great Curve” draws you in with its focussed intensity, then hits you with another absolutely massive chorus of its own, leading into the rifftacular “To The Cold”, which ties the whole album together with aggressive aplomb.

Despite the album’s slightly slow start, Raise the Torch proves that it’s not always about being the fastest, the heaviest, or the most extreme… sometimes all you need is to just be true to yourself, and kick out the jams in style.

Raise the Torch will be released on April 21 by Spinefarm Records / Candlelight Records.