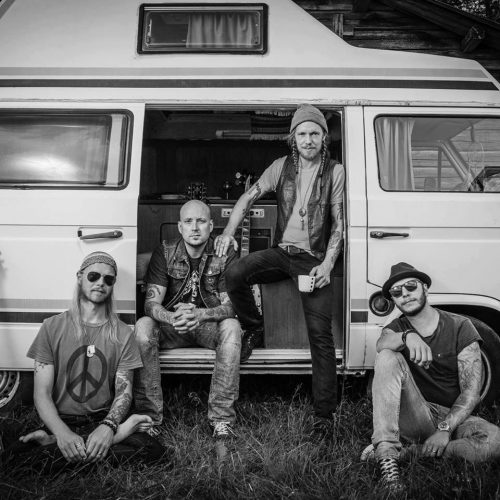 (Comrade Aleks brings us this interview of one of the founders of the Swedish band Kingnomad, whose new album Mapping the Inner Void was released by Ripple Music earlier this year.)

Take Uncle Acid & The Deadbeats, add a cleaner and heavier sound to their vintage doom rock, then enforce it with Sabbathian tritone and Dead Meadow’s psychedelic vibe, and it’s not difficult to imagine how Swedish occultists Kingnomad sound on their new record Mapping the Inner Void.

They don’t reinvent the wheel, but they do their work heartily, masterfully, and with sinister passion. Ripple Music did the good job lending a hand to Kingnomad to help with the release of the album. The time for unholy doom rock in all its crimson glory has come!

This interview with Johnny is the result of science and a spiritualism alliance as he gave me his answers through the virtual séance in truly unimaginable ways.

Hello Johnny! How are you? What’s going on in Kingnomad’s court?

Hello Aleks. I’m just fine and dandy, and all is just well in the court of kingnomad.

First of all, how long ago did you choose the path of dark infernal rock? How did you all gather under Kingnomad’s banner?

I have been playing music for like 30 years, and the older I got it became more business and less about music. So I decided to start up one last project, and this time I would not do it for the fame, money, or to conquer the world. I would do it for the love of music!

I grew up listening to music from the ’70s, Black Sabbath, Yes, Deep Purple, and so on. So when I started to discover all these “new” bands like Orchid, Dead Meadow, and Uncle Acid, that was a real mind-melter!

I wasn’t the only one wearing bellbottom jeans and wanting to play fuzzy riffs.

So when me and my good friend and neighbor Marcus started jammin’ together, it came very natural that the music we loved the most (old ’70s rock) was the music we would play.

Songs just started to come like rain from the sky, and soon we drafted our good friends Andreas and Maximilian along for the ride.

You’re telling us that you’ve been into heavy music for 30 years, what’s your background? What did you play before Kingnomad?

I started playing music when I was 8-9 years old, and I am a magnificent 39 years old now.

I was only 17 when my straight-edge hardcore metal band Purusam signed a record deal. We put out a few records, then I went on to play with lots of other bands. April Divine being the most successful of them all, did a couple of albums and lots of touring with those guys.

And what’s the experience of Marcus, Mr Jay, Maximilian… and Mr N? Stop, what’s the reason for such secrecy? And who’s Johnny in this list?!

Haha! Yeah when me and Marcus started this we thought it would be cool to keep a low profile. Mr M – Marcus. Mr N – Andreas, and so on… But in the end we didn’t follow through on that idea, so we scrapped it.

But Jay so happens to be sort of a nickname for me, so I just went with that.

What meaning do you put into the band’s name?

I wanted a name that you could see from different angles, a name of total opposites. A king is a man who has surrounded himself with people, and probably would not be anything without his people. A nomad is a person who has chosen a rather lonely life, a life on the road, a man without a kingdom.

Also, spelled together kingnomad becomes sort of gibberish, the meaning disappears. It means something but at the same time, it doesn’t. You see what you want to see, I kind of like that!

Ripple Music released Kingnomad’s debut Mapping the Inner Void about a month ago. What do you do now, when the release has taken its physical form?

To actually hold your music in your hands is an amazing feeling, and all of this has by far exceeded our expectations. We just wanted to hang out and play some music together, and all of a sudden people think our music is cool. It’s crazy!

Considering the direction you chose – the one which lies along the way of Ghost and Uncle Acid — do you already have invitations to play some big festivals this spring?

No one has offered us a festival gig yet, but when or if they do we sure will play! 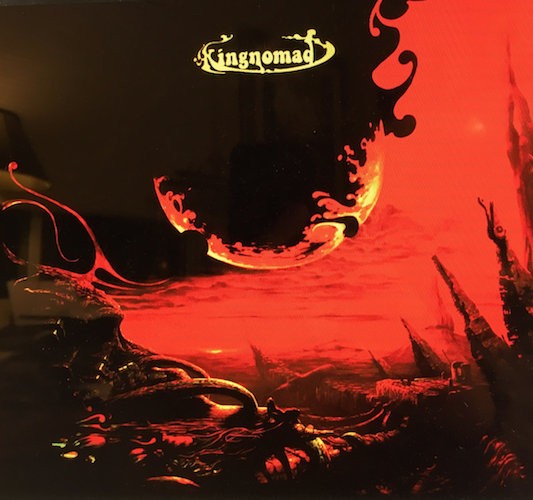 Your material is tagged as “occult doom”, do you agree with that description?

Yeah I can dig that!

There are a damned lot of bands around who tend to play in an old-fashioned manner and sing about devil worshiping. How do you see — what distinguishes Kingnomad from these bands?

Hard to say… I sort of have a vision about how I want us to sound. I wanted a mix between early Sabbath and Ghost, groovy riffs with nice vocal arrangements.

But something that might differ us from other bands is that both me and Maximilian come from the old Swedish progressive rock world, and you get a little flavor of that. (It is also something that will be a little more apparent in future songs.)

Sounds intriguing! Do you already have plans for the second full-length? What kind of musical ideas would you like to express through it?

I have almost finished writing most of the next album, and it will perhaps be a little different sound-wise then the Mapping album. But rest assured, it most certainly will sound Kingnomad!

This will be a full-on concept album, but not only in the lyrics. I have experimented a lot with musical ideas and themes that might be returning from one song to another.

The songs are sounding awesome so far, but it’s not finished just yet, so we will see where it lands.

Mapping the Inner Void shows strong songwriting — each track has its hooks and easily sticks in the memory. How long did you work over this material?

The oldest song on the album is “She Wizard”, and that has gone through some changes since we wrote it in early 2014.

Then there are songs like “Lucifer’s Dream”, which was the last song to be written for the album. We were one song short for the album, So I went down to my basement studio one evening, and a couple of hours later I had the song all worked out. I got my mojo working that night!

That is something I’d like to ask you – what’s your version of “Lucifer’s Dream”? What did you want from your point of view?

Aaah yes. There is a story to follow here. It started with “Lucifer Is Dead” on The Second Coming of Heavy, Chapter III split [by Kingnomad and Bonehawk, 2016]. If you listen closely on the “Lucifer’s Dream” intro you can hear fragments of “Lucifer Is Dead”. And there are four more songs written that will close that saga, but were they will end up nobody knows…

But my vision for “Lucifer’s Dream”, or for all our music for that matter. I want our music to be a vessel of transportation. You put your headphones on and drift off to another world. That is the vision and that is the purpose.

Besides that, the overall production is pretty high, as you could just do lo-fi stuff as Uncle Acid do. What were your main requirements for the sound in the studio?

My wife is a musician as well, so I have been able to build quite a nice studio in our basement. But we keep it pretty simple you know. Just a microphone in front of the amp, and if you are good at playing your instrument it will sound good too. It truly is as simple as that.

Being able to go down to the studio at any time of day gives you total freedom, and thus very little difficulties. Yes we have a couple of songs that did not fit the album conceptually, one of them will appear in a yet secret project. 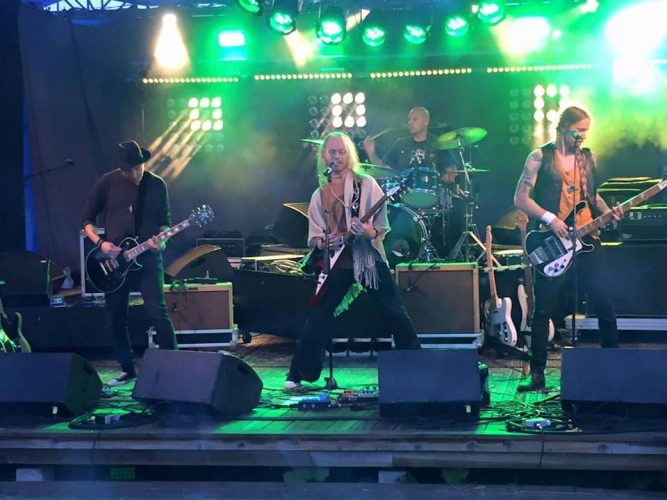 Does it mean that you compose most of the album? How much do the other members contribute in Kingnomad? Or is it only your own vision?

You can say that I am the main writer, but it is never a dictatorship. Anyone who has an idea brings it to the table, and it will be worked on. And if I write a song, I just present it to the guys and just say: Do your thing. Everyone gets to be creative and do what they think is best for the song. And if it becomes a song nobody really likes, then we scrap it. No big deal.

And another important thing in this matter — our songs are most alive, they are not written in stone. If we feel the need to change something in a tune then we will, for the sake of keeping it fresh, alive and kicking. So what you hear live might differ from what you hear on the album, it makes it interesting and fun for us as musicians.

Lucifer, R’lyeh, Witches – what else do you prefer to write about in your lyrics?

Mapping the Inner Void is a journey through Lovecraftian landscapes. All the lyrics can be traced back to Mr HP´s work in some way. The concept for the next album will be a little different.

And you understand… I need to ask, what will it be?

Also, how serious are you with that occult image?

We are serious in the sense that the image has to carry the music in some way. I have a VERY hard time listening to a ’70s rock band and the singer is wearing a pink Ed Hardy shirt, you know, there is no sincerity to that. You got to be what you play, or at least for the moment become what you play. Music should appeal to all the senses, sight and sound.

As for me, when we come home from a gig, I keep my bellbottom jeans on.

What are your ambitions considering Kingnomad? How much are you ready to sacrifice in its name?

As long as we are having a good time together, the Kingnomad train will keep rolling, and we will gobble up everything that is offered to us in all ways possible.