Ten months ago we had the pleasure of premiering a full stream of Indescribable Physiognomy Of The Devil, the most recent album by the Brazilian death metal band Coldblood. And today we get to bring you a video for the seventh track from that album, a chilling blast of hellfire appropriately named “Sulphur“.

The release of  a video like this one serves several purposes, one of which is to turn people on to an album they might have missed — and Indescribable Physiognomy is one that shouldn’t be missed if you’re a fan of barbaric, pulse-pounding death metal. 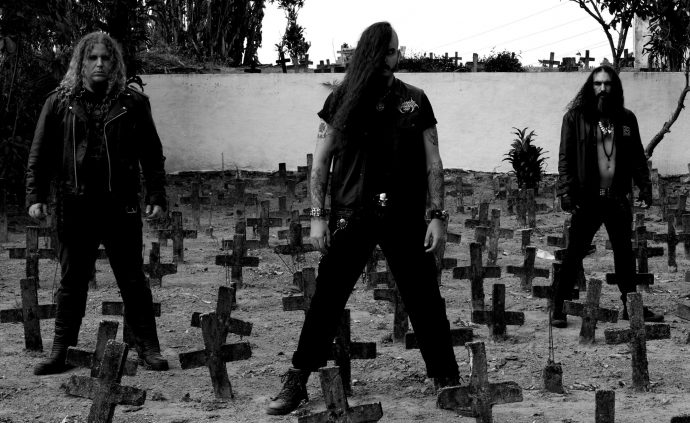 As we explained when we premiered the album, it’s a blasphemous scourge of deep, grinding riffs that whir like bone saws and jolt like pile-drivers cracking pavements as if they were ice, propelled by a jet-fueled drum attack that keeps the energy in the red zone, even when the band depart from their usual high-speed barrages and deliver ghastly mid-paced soul-reapers.

Coldblood join skull-clobbering grooves with an array of dismal, morbid melodies and a mix of noxious, gravel-throated roars and hair-raising shrieks. And throughout, the music generates an overarching aura of malign, infernal ferocity and sinister, supernatural peril

This is also high-grade headbang fuel, with plenty of bounding, bolting, darting technical flash to keep your adrenaline levels elevated — including bursts of searing, scintillating guitar solos that swoop and dive like demon bats on fire.

“Sulphur” is a particularly grim example of what the album has to offer, a dose of cold poison that hammers heartlessly and seethes in bursts of predatory chaos.

The video you’re about to see was produced by CS Music Videos, with footage recorded at Iguaçu New Cemetery and Old Cemetery of the Slaves in Rio de Janeiro, Brazil. The band’s vocalist/guitarist Diego Mercandante gave us these comments about the song and the video:

“Sulphur” is a song with a simple structure and a very strong physical extra energy, a lyrical delirium that describes the scenery of the location as well. As the lyrics say, we literally went to the confines of hell to make this shooting! The illustrative clip is a neophyte being attracted by a black Sendero, bearer of all the trans-cultural knowledge of the black pantheon. An endless saga without a return path begins… “

Indescribable Physiognomy Of The Devil was mixed and mastered at Studio Underworld in Germany by Mersus (drummer of the band Deströyer 666). The cover was created by Rafael Tavares (Azaghal, Blood Red Throne, Ocultan, NervoChaos, Ophiolatry). To buy the album, go here: