In 2015, Seer from Vancouver, British Columbia, made their first mark on the musical landscape with an EP entitled Vol. 1 and followed that in 2016 with a second EP, Vol. 2. That same year, Art of Propaganda released a compilation (Vol. 1 & 2) that combined both EPs. And now Art of Propaganda is preparing to release Seer‘s first full-length album, a 45-minute monolith called Vol. III & IV: Cult of the Void. Today we have for you one of the void-faring offerings from the new album in the form of a surreal music video — “They Used Dark Forces“.

Seer‘s choice of titles for their releases reflects the evolving narrative concept that runs through the lyrics of their material, just as the band’s name meshes with the mystical nature of their music; it calls the mind to venture beyond the bounds of what we can see and touch around us, just as its narrative arc crosses limitless primordial landscapes and moves into celestial realms, while the sanity of its protagonists is tested to the breaking point. 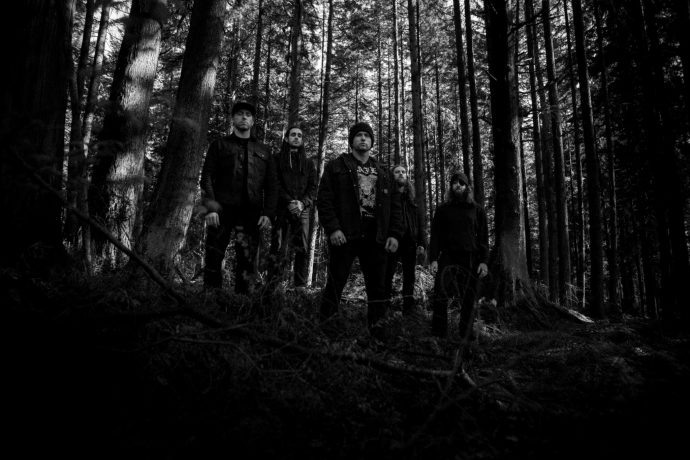 Like all of the band’s previous videos, the one for “They Used Dark Forces” was directed and edited by Lucien Cyr [http://www.murdernaki.com]. It reveals a kind of pilgrimage by a trio of travelers across a harsh and barren wasteland in search of something mysterious, and it becomes a harrowing journey that they might wish they had never undertaken.

Musically, Seer themselves use dark forces in this song — with craggy, rumbling riffs and thick, coiling guitar leads mixing with eerie strands of melody, throaty roars, and fierce yells to build an aura of approaching doom. The atmosphere of the music grows even darker as the pace slows and the rhythms hammer with cold, brute force, an episode which becomes a prelude to a pulsing guitar pattern and clean vocal arcs that turn to shattering shrieks.

The path of the music is one of ever-increasing intensity. As its velocity increases, so does its destructive power; the vocals become soaring wails, and then ominous spoken words and agonized cries, with the music twisting into nightmare shapes — and then the band proceed to stomp the listener’s head with cataclysmic force.

Entwining elements of sludge, doom, and stoner metal with an occult, fantastical atmosphere, “They Used Dark Forces” makes for a memorable introduction to the new album. It features cover art by Waguna Wiryawan and will be released by Art of Propaganda later this spring. For further release details, watch these spaces: