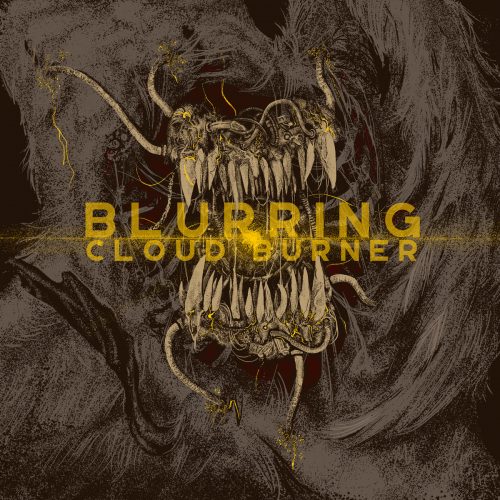 (Austin Weber brings us the full streaming premiere of the new EP by Blurring, along with an introductory review.)

After the breakup of Brutal Truth, the band’s members have continued on in multiple outfits, one of the finest of which is Rochester, New York-based technical grindcore act Blurring.

While the band had some demos and other releases preceding their 2015 self-titled album, it was that release that really got me hooked on their complex and disturbing brand of grindcore. Some of you might have caught my review for it here at NCS; if not, now’s your chance to check out Blurring — don’t fuck up. The band is set to release Cloud Burner on April 28th, a fantastic five-song EP that we’re streaming early in full today. 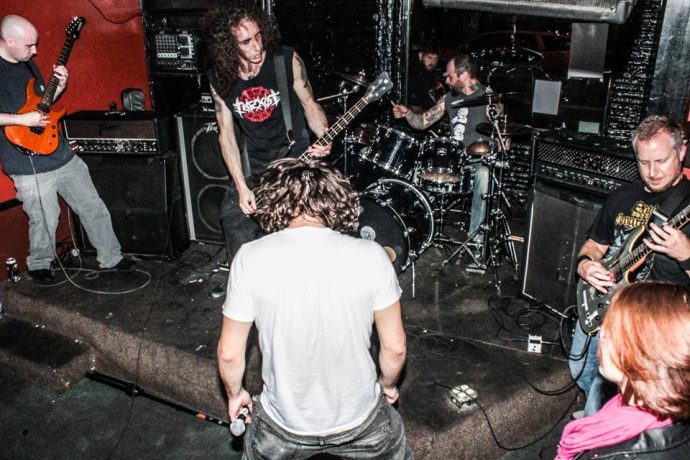 On Cloud Burner, Blurring continue their reign as one of the utmost elite grind bands around, with a sound that’s largely a continuation of the black-metal- and death-metal-influenced techgrind style they’d already established on prior efforts. The minor tweaks and subtle upgrades to their sound are noticeable if you listen closely, though.

First and foremost, this time around the black metal influence takes up a bit more space in the music. Vocalist Mark Welden continues his Jeff Walker (Carcass) gone black metal snarls of anguish on Cloud Burner, oozing pure bile at all times with a delivery that feels damn near unholy, and sparingly adding in some nasty roaring growls as well. Likewise, his lyrics are very interesting to read; they’re vivid and horrific, with a poetic edge, which fits perfectly with the music Blurring play.

Erik Burke’s drumming is once again a frantic stuttering engine, one whose machine-like precision comes paired with a feeling of going off the rails and losing control, at all times. Throughout Cloud Burner, Erik has a tendency to start fast and go faster, a weaponized form of percussion the band use to up the ante, frequently in unison with the guitar work, just when you think a given moment or song has reached peak intensity.

Similar to how I felt about 2015’s self-titled album, it’s the guitar and bass work here that steal the show, though without a doubt every single member here is performing at an incredible level. Blurring have some of the best riffs and ideas in the grind game, and Cloud Burner is a veritable goldmine of god-tier grind riffs.

The band have a hard-to-pin-down but unique riffing style that is incredible. It’s chaotic and frenetic, yet powerful and menacing in a way few grind bands capture. The band’s talented guitar duo consists of seasoned vets Matt Colbert and Scott D’Agostino, who are grind legends themselves as former members of Kalibas, one of the best grind bands ever to exist, in my opinion. Kalibas was a product of the early 2000s tech-grind/technical death-grind scene who put out several sick releases through Willowtip Records, and at one time even included fellow Blurring member Erik Burke in their ranks as well.

Cloud Burner is a grim and endlessly venomous experience. The intensity and deranged nature of these songs creates a nauseating atmosphere, one that’s akin to being thrown into a drug-induced state and battered violently while the world burns around you. Grindcore often makes me think of pizza, as it’s easy to enjoy most all of it, but only a few offer an experience worth returning to, and Blurring are indeed one of those rare bands with a longer shelf-life, bad pun intended.

Cloud Burner stands as yet another memorable release from Blurring, one that’ll stick with me for a long time due to its incredible quality and depth. Hell, I haven’t stopped spinning the 2015 one yet, so I’m sure I’ll be playing Cloud Burner for a long time. Grind your heart out.

3 Responses to “AN NCS EP PREMIERE (AND A REVIEW): BLURRING — “CLOUD BURNER””