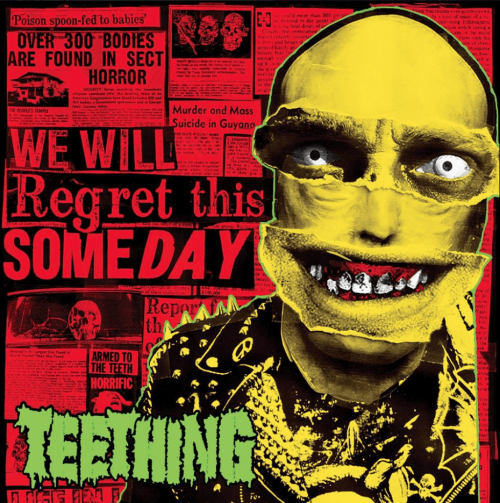 If you’re not familiar with Madrid’s Teething, I’d suggest you have a neck brace handy so you can immobilize the cervical fractures while you seek medical attention after listening to this song. Borrowing some body armor before pressing “play” would be good idea, too. Have you considered writing a last will and testament? Instructions regarding cremation or coffin burial?

“Violent” and “destructive” might begin to describe “An Open Letter To My Best Friend“, but words like “unhinged” and “obliterating” are more accurate for this brand of grinding hardcore. I’ve thought of some more words, too. But first I suppose I ought to tell you that this song is only one of 12 assaults on the senses contained within Teething’s first full album, We Will Regret This Someday, which is being released by a consortium of labels in different formats, each of which should be classified as a weapon of mass destruction. 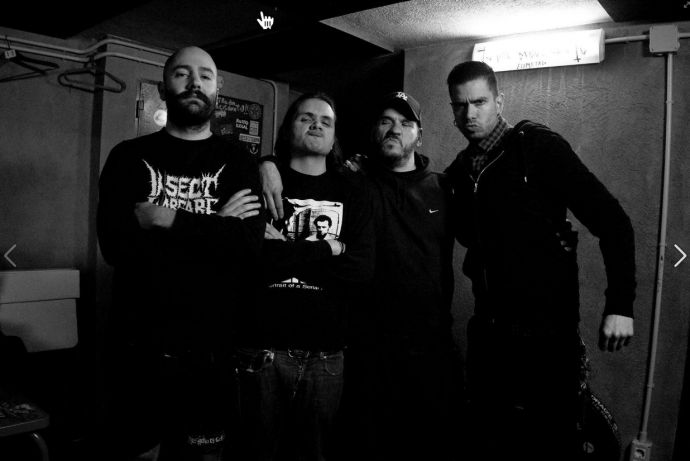 “So Alvaro, the drummer, loves shit like Brujeria and Napalm Death – hence the Morbid Angel patch he bought at the age of 15. Then come along the other 3 dudes, who love Integrity and grindcore. Throw in a smelly bass player that looks like a homeless asshole and you get one filthy sounding band.”

That’s how Teething describe their origin story. And from there, the band proceeded to discharge a stream of 7″ records over something like six years, allowing fans just enough time for a hospital recovery in between them. I guess with 12 tracks being delivered all at once, they finally decided to really take the gloves off and just beat the living hell out of their fans.

“An Open Letter To My Best Friend” (which features an appearance by John Hoffman of Weekend Nachos) is a brutal barrage of gut liquifying riffs and hammering, bone-smashing percussive assaults. The lyrics might make you smile, except for the fact that the vocals sound like an audio incarnation of completely over-the-top, blood-lusting rage.

The main reason you’ll need a neck brace is the bout of jackhammering that Teething launch after about a minute, following some tender words of encouragement. You’ll want to headbang hard, but it’s also the kind of pneumatic beatdown that seems designed to leave listeners in a pile of bone fragments and jellied internal organs. Just to make sure you’re not still able to crawl, they follow that with a sledge-hammering breakdown.

This is lethal material, and comes highly recommended despite the risks of high-energy trauma. I’ve also included a stream of a previously released advance track, “Filipino Violence“.

We Will Regret This Someday was recorded and mixed at Sadman Studios and mastered at Audiosiege. It will be released on May 19th by: