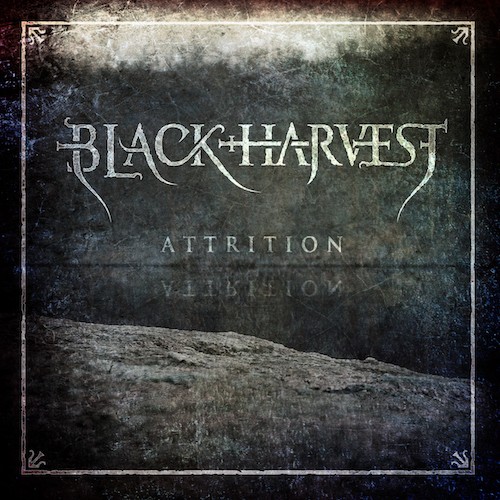 (Austin Weber brings us this premiere of the new EP by New York’s Black Harvest, along with some introductory impressions of the music.)

Some musicians are content to play within traditional sounds and genre boundaries, while others (Devin Townsend comes to mind) see all of music’s many genres as a vast palette that one can draw from and combine in new ways to paint a musical world all their own. This form of vast experimentation lies at the heart of all that Kishor Haulenbeek does, as both an incredibly talented visual artist and also as a musician with multiple musical projects that he has used to explore different facets of his interests, all of which convey an honest emotional feeling yet cover dramatically  different musical terrain.

Last year here at NCS, I finally got around to covering his fantastic mathcore-addled technical grindcore band Crisis Actor, and shoehorned in some coverage of his primary project, Black Harvest, at the same time. Today we’re bringing you an early stream of the group’s fantastic new EP, Attrition.

If you’re new to Black Harvest, the band is based in New York and has existed since 2002, with many releases under their belts to date. The group have a multi-faceted take on death metal that defies easy categorization, through a unique blend of black metal influences conjoined with a death metal sound that draws from melodic death metal, progressive death metal, and a dash of technical death metal in a sort of Gorguts vein. Kishor has summed it up in a tidier way: “Attrition weaves melodic, progressive, and dissonant strains of death and black metal together with acoustic guitars and haunting choral vocals to portray a search for clarity in the depths of conflict, loss, and isolation.”

Kishor Haulenbeek is the architect behind all of the music here, as he performs all of the guitars, vocals, and bass, along with creating the cover art for Attrition too. Joining him for the first time on a Black Harvest release is none other than drummer extraordinaire Kenny Grohowski of Secret Chiefs 3 and Imperial Triumphant fame. As usual for anything he’s involved with, his drumming here is fucking incredible and one of a kind.

Beyond Kishor and Kenny, members of Black Harvest’s live line-up were also a part of the collaborative songwriting process, leading to dynamic and immersive material with a lot of depth and unexpected twists and turns in every song.

At just under half an hour, delivered across six expansive songs, Attrition flows eloquently as a single piece of music. So I’m glad that we’re doing a stream of this as a single piece of music, though the stream video does delineate when it changes from one track to the next if that helps anyone when jamming it. Hearing this in one continuous sitting is how this is intended to be listened to, in order to fully take in its many peaks and valleys, continual shifts in mood and styles, and above all else, its deft mix of mournful emotional gravitas spiked with hellish ferocity.

If you’re looking for an exciting new take on death metal, look no further. Attrition is a memorable work of art that stands out from the pack with a highly developed and intricate sound all its own.

Black Harvest’s Attrition comes out this Friday, May 12th.

One Response to “AN NCS EP PREMIERE: BLACK HARVEST — “ATTRITION””