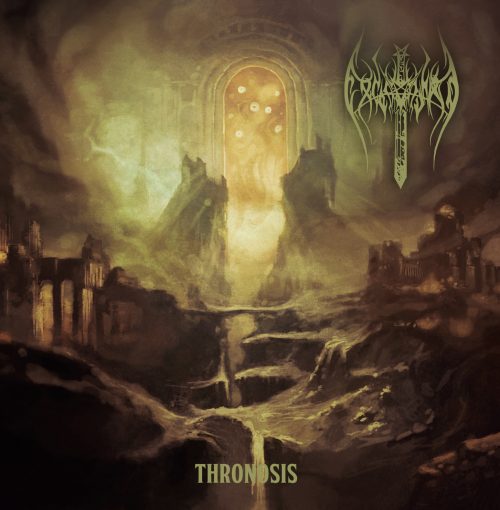 (Todd Manning brings us this review of the new EP by Colorado’s Excommunion, and we also bring you a full stream of the music.)

At this point, it’s no secret that I have been extolling the great state of Death Metal in 2017, and so I wanted to pen a quick missive singing the infernal praises of another powerful release, the new Excommunion album, Thronosis.

I’ve noticed that so much of this great Death Metal is coming from scene veterans, and Excommunion is in that camp. This is the follow-up to 2002’s full-length Superion (with a split in between), and this release finds the group in fine form.

For those familiar with Superion, the new material is not a drastic departure, but only a step forward. The general blueprint is still based around classic Morbid Angel, with huge nods toward Nile and others as well. What is perhaps most impressive is how effective Excommunion are at any tempo. Their blast beats have all the intensity of Angelcorpse, and they also throw in plenty of memorable, crushing Doom moments, especially in the culminating moments of opener “Twilight of Eschaton”.

If Excommunion do especially excel in one particular area, though, it would be in their mid-paced sections.  Here, they are able to summon the commanding, vicious presence of Morbid Angel’s most seminal material. On “Nemesis”, the vocals seem to hold sway over legions of demonic hordes, the steady instrumental march underneath invoking divisions of armor rolling over everything in their path.

Truth be told, Excommunion don’t so much craft songs as much as they just string together memorable moments, but I can think of many a great Death Metal album that does the same thing. Their song structures can be labyrinthine, but while this might detract from the “hummability” factor, it certainly adds to the atmosphere.

Any discerning Death Metal fan will find much to love on Thronosis, and we certainly will be hoping that it doesn’t take another fifteen years before the next full Excommunion release.

Dark Descent Records will release Thronosis on May 12.