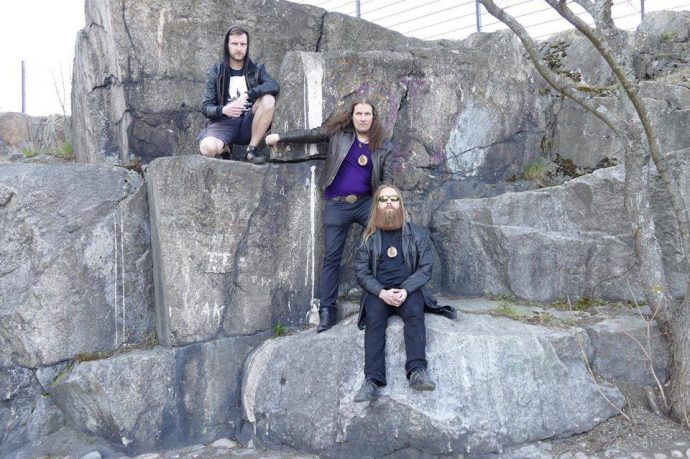 (Today our Russian friend Comrade Aleks isn’t bringing us one of his interviews, but instead some news about the Finnish band Cardinals Folly, including a single from their new album.)

This blasphemous doom cult was started in Helsinki in around 2004, under the name of The Coven. That title fitted the band’s music, but there were just too many bands with the same name, so The Coven was dissolved and renamed Cardinals Folly, after a place in a Dennis Wheatley black magic novel.

The head of this sect is Mikko Kääriäinen and he’s been the only constant member of Cardinals Folly since its beginning: other musicians have come and gone after a number of occult sessions. Probably only drummer Sebastian Lindberg demonstrated real perseverance, as he accompanied Mikko from the first EP Heretic’s Hangover (2008) until the second full-length Our Cult Continues! (2014), but even he left the band a year after that album was released, and the next one, Holocaust of Ecstasy and Freedom, was recorded with a new lineup.

From the very start, the band developed its own image — it produces sinister doom metal with both anarchic and archaic approaches, as Mikko gained experience playing in the black metal band Santhyricorion for about three years. He explains his sympathies to the Devil with logical arguments:

“In hell you will definitely meet more interesting people than in heaven, so I’m fine with my way of life and pact with the devil. Satan is metal’s master! And source of our power. I’m fine with that. And look — he’s not evil. That’s just dogmatic! He’s misunderstood. Metal is about pleasure and hedonism, Satan is the key. One life to live!”

On the thirteenth year of its existence this formation returns with a new album, Deranged Pagan Sons, (coming out via Nine Records on CD and Topillo Records via LP in 2017). Here’s the new song “Worship Her Fire”.