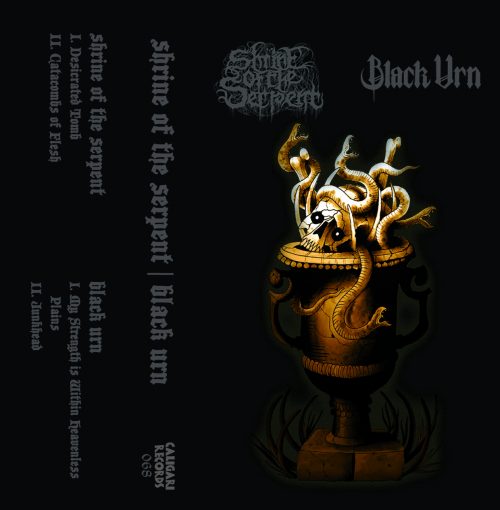 To be drawn slowly to your death in a viscous pool of quicksand beneath a pitch-black sky, with no one to hear your screams, must be a terrifying experience. If an earthquake were happening at the same time, with an upheaval of stone smashing your sinking limbs beneath the surface while demons howl in your mind, that combination of experiences might resemble the sensations of this split.

The two violent sludge/doom bands who have joined forces in this outpouring of affliction come from opposite sides of the U.S., yet based on the music, they seem to be kindreds in spirit, bound together in a joint mission to reap the souls of their listeners. The bands are Black Urn and Shrine of the Serpent, and their split will be released on tape by Caligari Records on June 2nd. 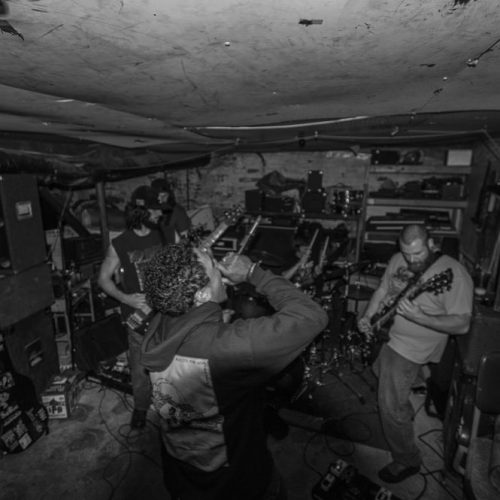 Black Urn come from Philadelphia, and this is their fourth release overall, following a 2015 demo, a 2016 EP named The Pangs of Our Covenant, and a split released earlier this year with Moros (from which we premiered a Black Urn track here). Their two tracks open and close this tape, with the two Shrine of Serpent offerings located in between them.

The tape begins the process of dragging you beneath the surface with a long and lethal Black Urn piece named “My Strength Is Within Heavenless Plains“, in which a forlorn bass-and-drum duet is joined by the desolate, haunting moan and wail of a guitar, eventually accompanied by the vocalist’s heartless roar. It slowly twines around the listener’s neck like a serpent, as your eyes fix in a thousand-years stare.

And then, without warning, it accelerates, the guitar injecting a buzzing, needling intensity into the listener’s brain pan, and the bass pulsing faster than a fearful heart. It slows again, the vocals manifesting a wrenching agony, and then mounts a final blood rush of intensity with a melody that seems… almost heroic.

By the time you come to Black Urn’s second track, you will be in desperate condition, for reasons I’ll explain when I come to Shrine of the Serpent, and at that moment the band’s cover of Alice In Chains’ “Junkhead” almost seems like a blessing. Don’t get me wrong — it staggers and rumbles like a ruthless juggernaut while the vocals are exclaimed in a cavalcade of boiling shrieks and ghastly howls. But it’s also a catchy, head-moving song, thanks to a sinuous head-trip of a guitar melody tinged with stoner stylings that surfaces like cobras swaying from the walls of your mind. It might even make you smile, something like the grin of a serial killer. 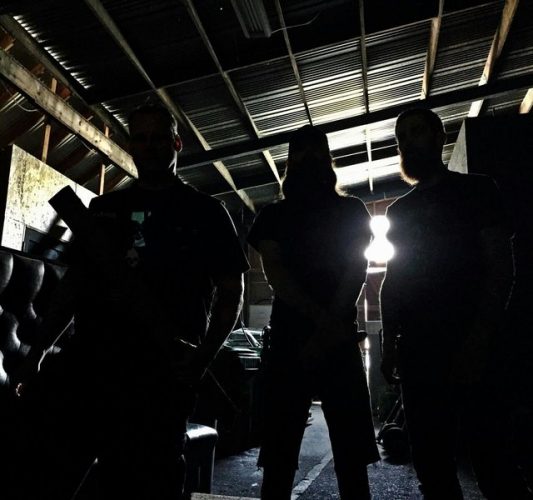 SHRINE OF THE SERPENT

On the other side of the country in Portland, Oregon, you’ll find Shrine of the Serpent, whose line-up consists of current or former members of such bands as Aldebaran, Graves At Sea, Uzala, Lung Molde, and Triumvir Foul. Their previous release was a self-titled EP in 2015. As mentioned, their two songs are in the middle of this four-track split, and those songs finish the deliberate job of suffocating and crushing that Black Urn begin.

“Desicrated Tomb Master” wastes no time slowly stretching the listener’s body on the rack, both pulling sinews apart and smashing bones to dust with a massive, trudging assault built from a titanic, vibrating riff and gut-slugging bass and drum punishment. The song’s melodic blood-flow is black and blasted, a congealing ooze of bitterness and abandonment. Stunningly heavy and hopeless for most of its length, the song ends in an effusion of frightening sounds that conjure the arrival of the horror that has been approaching since the outset.

The bleak, heaving melody of “Catacombs of Flesh Master” groans under the weight of cold stone and eons of death, with the lyrics exclaimed in raw, flesh-rending howls and heart-splitting cries. The glacial approach of catastrophe spills over into more frenzied bursts of guitar swarming, the music becoming more intense and spine-splintering, the atmosphere becoming as terrible as a mass grave. A flickering guitar surfaces in this obliteration to ratchet the tension even more, and that serves as as a prelude to an even more massive stomp and a final surge of violence.

What’s that phrase? “Not for the faint of heart” — that’s an apt warning here.

UPDATE: I described the tracks in the order in which I first heard them. The Bandcamp stream that I’ve added through this update presents the Shrine of the Serpent tracks first, followed by the Black Urn tracks.

Shrine of the Serpent on Bandcamp:
https://shrineoftheserpent.bandcamp.com/releases 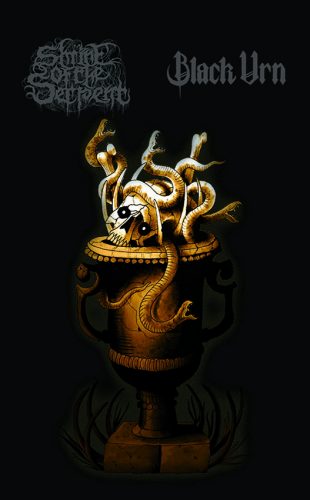 To pre-order this split on tape from Caligari Records, go here:

One Response to “AN NCS SPLIT PREMIERE (AND A REVIEW): BLACK URN AND SHRINE OF THE SERPENT”