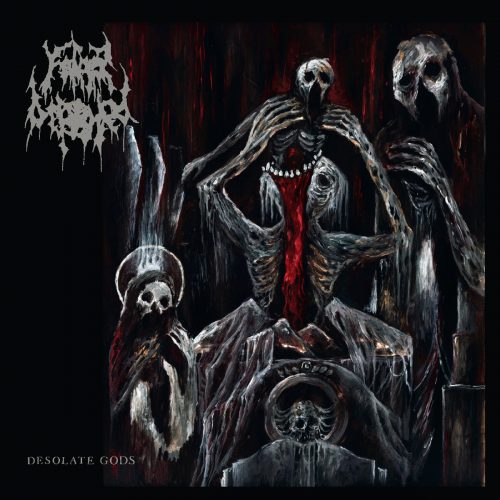 Five years on from the release of Revulsion of Seraphic Grace, the Georgia death metal monstrosity known as Father Befouled returns with its fourth album, Desolate Gods. It will be released by Dark Descent Records on the 23rd of June, and it includes the terrifying new track we’re about to premiere — “Ungodly Rest“.

Prepare yourselves for a deep descent into a nightmarish crypt filled with still-festering corpses and hungering ancient evil, for what you’re about to hear is the kind of staggering doom and seething death that spawns such visions.

The descent begins with slow, morbid chords and the thud and crack of drums, but as a foreshadowing of things to come the music soon begins to boil as well as lumber and heave like a gargantuan beast. And speaking of gargantuan, Justin Stubbs’ abyssal vocals are mammoth, and a suitable match for the awful power that emanates from the song’s doom-drenched opening. But the violence lurking just below the surface of this suffocating prelude is eventually set loose, in a fusillade of blasting drums and furiously writhing guitars punctuated by shrieking notes.

When the music slows again, it’s to set the stage for a melodic solo that’s both dismal and soulful, which beautifully accents this shuddering display of death and decay. And one final juggernaut rampage still lies ahead before the song ends.

While “Ungodly Rest” still bears the unmistakable stamp of Incantation, it reveals other influences as well, while remaining firmly rooted in the rotten soil of abominable death metal.

Desolate Gods was mixed and mastered by Cruciamentum’s Dan Lowndes at Resonance Sound Studio, and comes with the distinctive (and ghastly) cover art of Alex Shadrin (of Sickrites and Nether Temple Design). Dark Descent will initially release the album digitally and on CD, with tape and vinyl editions coming later. Below you can listen to the album’s previously release title track, as well as our premiere of “Ungodly Rest“.