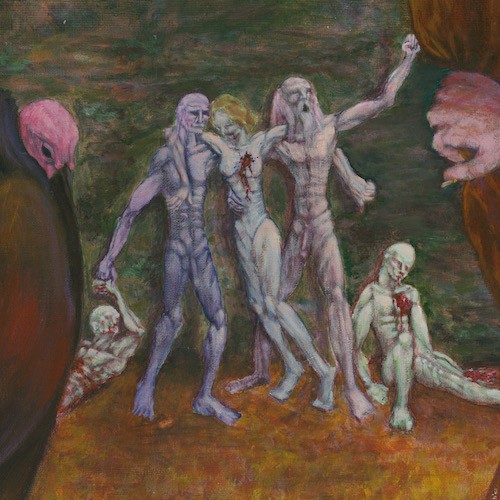 We’ve been following In Human Form since 2013, reviewing both their debut album Earthen Urn that year and their contribution to the Northeastern Hymns split in 2015. Late last fall they independently released their second album, Opening Of The Eye By The Death Of The I, which was spotted by the sharp eyes and ears of I, Voidhanger Records — who will now release the album both digitally and on CD later this month. And that provides the occasion for us to stream a mammoth (and utterly fascinating) track from the album named “Zenith Thesis, Abbadon Hypothesis“.

For those who haven’t yet encountered the music of this Massachusetts band, it’s far from easy to classify in recognizable genre terms. The label refers to it as “an audacious blend of aggressive black metal and progressive music, tinged with jazz-fusion colours” and recommends it for fans of Abigor, early Satyricon, Taake, Enslaved, Death, King Crimson, and Frank Zappa. Not surprisingly, under such circumstances, the band conceived their own term for the music: “Atra Metalli Metaphysicam”. 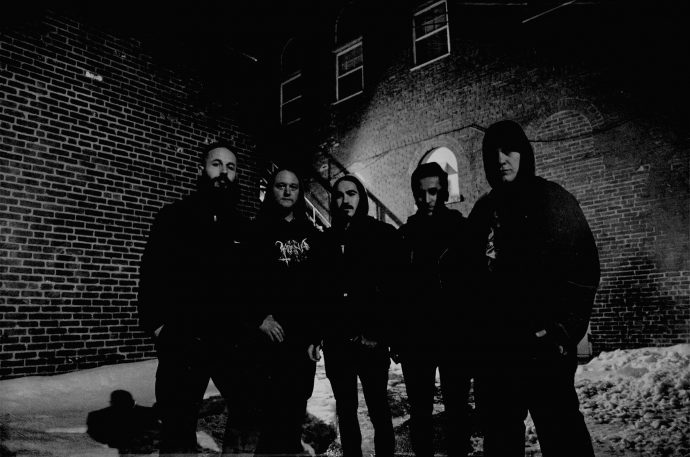 “Zenith Thesis, Abbadon Hypothesis” is one of the album’s three main pillars, which range in length from 14 to more than 16 minutes, and it brings to mind a word we’ve used before in attempting to describe this band’s music — “kaleidoscopic”. It takes the listener through a twisting and turning labyrinthine splashed with ever-changing colors. The tempos and rhythms are in almost constant flux as the band romp, rock, gallop, swing, and lurch. Melodies both harmonious and dissonant, sparkling and disorienting, flow and war with each other, morphing the emotional resonance of the music across a broad spectrum.

The instruments used may (or may not) be traditional to metal, but the sounds they produce often are not, with the sounds of brass and acoustic instruments augmenting the shifting guitar tones and the mercurial drive of the rhythm section. The instrumental performances are also as genuinely impressive as the eye-popping inventiveness of the composition. But while the music is highly experimental and ceaselessly exuberant, the scalding vehemence of the vocals maintains a tether to the realms of black metal.

So, set aside 16 minutes and give yourself over to this fascinating musical trip, which is quite unlike anything else you’re likely to hear this year (or any year).

Opening of the Eye by the Death of the I was recorded and mixed by guitarist Nicholas Clark at The Black Lodge. The cover art was painted by Kenny Richards. I, Voidhanger will release the album in a limited 4-panel digipack edition (with booklet) on June 23rd. For information about how to order the album, watch these spaces:

We’ve included the extensive lyrics to the song we’re premiering just below the stream.

Embryonic Architect
Somnambulist, enlighten mine
The worshiper’s vernacular
The miserable without stains

What were those promises?
Did you intend to keep them?
Or were they just a pestilence of lies?
How many minds have you manipulated without wisdom?

A mere demiurge loitering midst the pantheon
Surveillance of the gate determines narrow pathways
Our patriarch denied us fruit to endure knowledge
That dream was fleeting through a moment in serpents
To be imperfect in our search for perfection
As the maestro awakes corporeal forms from their sleep
Transformed by the removal of tethers and restraints
Now be the loud pitch that disturbs the silence
As all you have, or had, or wanted is revealed
The circle’s drawn and it is drawn wide
Now hither comes the coil
To leave behind the ego’s host
And from what’s left become the ghost that whom rejoices
The scythe wielded pulls our death into position
As were flung towards our fateful ambition

Minds buried in an enslaved host
To be reveled, however, only through death

Absorb the seals, beguiling
Transformation underneath eyelids
They bare for the fruitless
Conceal breath from all who inhabit life
Reveal Supreme Death
(Reveal the Zenith)