(In this edition of Andy Synn’s ongoing series focused on British bands, he reviews the heavy new albums by Chaos Trigger, From Eden To Exile, and A Trust Unclean.)

Of course, I don’t actually think that (well, not 100% anyway), but it got your attention, didn’t it?

But the truth is that “true” originality – while perhaps always something to aim for – is actually quite rare, and isn’t necessarily the be-all-and-end-all of music.

Granted, being a second-rate knock-off of another band isn’t exactly something to be proud of, but it’s entirely possible to make great music without breaking the mould or realigning the paradigm (or whatever your metaphor of choice might be).

Sometimes it’s enough just to write a bunch of great songs, great hooks, and great riffs, and stamp them with a sense of your own identity.

So here we have three bands from the UK, none of whom I would necessarily call “original”, in the strictest sense of the word, but who each still kick out the jams with an impressive amount of energy and integrity all the same. 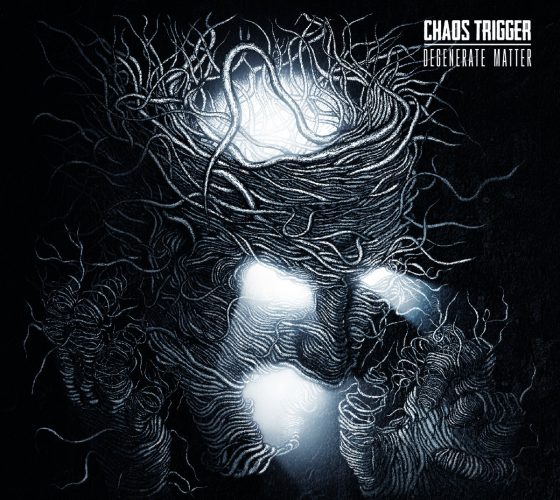 You know how they say “dress for the job you want”? Well I’ve found that the same often applies when it comes to album art, as I recently discovered Welsh riffians Chaos Trigger purely due to the striking nature of the artwork which adorns their new album, Degenerate Matter.

Dealing in a high-voltage blend of heavy, hyper-modernised riffs and pneumatic, pulverising grooves, the group’s sound is strongly reminiscent of the much-missed, long lamented, In-Quest, and the album begins with the chunky, low-tuned guitars and rapid drum work of “Binary”, a track which also finds the quintet dabbling in some heavily Meshuggah-esque grooves during the song’s stunningly heavy second half.

“Rust” continues this heavily groove-focussed assault on the senses, but never falls into the trap of simply ripping off the kolossal Swedes, as the CT crew also throw a bit more straight-up Death Metal (not to mention a splash of outright melody) into the mix too.

Similarly “Release the Hounds” takes a little bit of Death and a little bit of Thrash and welds it onto a machinelike chassis that pulses with power and potential, after which both the pounding (no pun intended) “Fucking Machines” and the lurching, darkly melodic “Polar” find the group leaning towards a more straightforward, Deathcore-tinged approach.

With “Snakes in Suits” (great title btw) the fearsome fivesome drag things in a more aggressively angular and dissonant direction, all chugging riffs, churning rhythms, and chattering drums, raising the intensity and upping the ante in suitably savage style before transitioning into the similarly punishing strains of “Dead Horizon”, whose gigantic grooves should really give your neck a workout.

Track nine, “Gluttonizer”, reveals itself to be an absolute monster of oppressive down-tuned riffs and primal aggression, complete with unpredictable injections of darkly deviant melody when you least expect it, while the slightly misleadingly-titled “Finality” turns out to be one of the best and most compelling tracks on the album, combining hypnotic rhythms and heaving riffs with an overarching aura of menace and malevolence.

Concluding with the twisting, tumultuous bombast of “Use of Weapons”, Degenerate Matter is a real diamond in the rough, and one you definitely need to check out if you’re a fan of crushing cybernetic grooves and riffs the size of cruise missiles.

Much like their Polish counterparts in Koronal (whose album I reviewed here), Chaos Trigger have somehow managed to take a bunch of very current, zeitgeist-friendly influences and weave them together into something both engagingly distinctive and devastatingly effective. 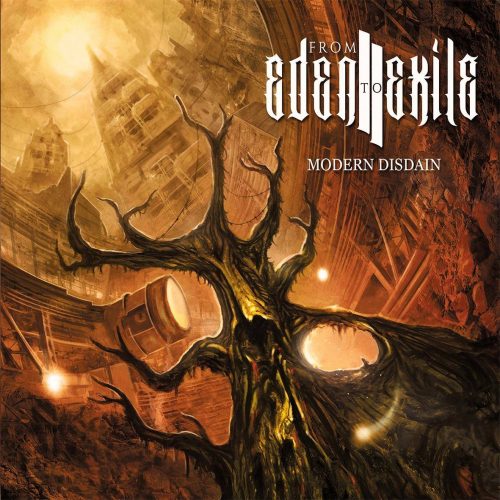 FROM EDEN TO EXILE – MODERN DISDAIN

Similar to their Welsh counterparts above, there’s nothing that From Eden to Exile do which could really be considered truly “original” – their particular brand of groove-focussed, Thrash-tinged Metalcore plays around with a host of familiar, but still impassioned, sounds, and owes an obvious debt to NWOAHM leaders Lamb of God – but the band have still managed to craft an enjoyably meaty slab of metallic muscle in this, their debut album.

So while you’ll undoubtedly have heard a few of these riffs before (in some manner or other), there’s no denying that the group’s overall execution is absolutely top-notch, with the opening triptych of “Gospel Untol”, “Modern Disdain”, and the appropriately explosive “Volatile”, kicking things off in furious style, all fire and fury and pissed-off invective courtesy of vocalist Matt Dyne and his undeniably Randy Blythe-esque snarl.

And while the shadow of the Virginian groovemongers looms extremely large over this album – tracks like “Victim”, the thrashy “The Dreamer”, and the nimble-fingered ferocity of closer “Sentiment” could sit seamlessly alongside material from the Sacrament/Wrath era – the group also lean a little harder on the more melodic side of things at times, displaying a knack for flashy fretwork not dissimilar to the currently on-hold Sylosis, along with some occasional proggy touches (such as during the aforementioned “Sentiment”) which recall NCS favourites Byzantine.

Saving the best for (almost) last, the eponymous “From Eden to Exile” serves as another great showcase for the impressively agile riffery of Kelland and Bell, as well as the underappreciated percussive performance of drummer Liam Turland, with the quintet throwing in some surprisingly expressive and extravagant melody work amongst all the usual hard-driving, groove-centric riffage, after which the galloping thrash-core attack of “What You’ve Done” takes things in a much darker, more intense direction, and proves itself to be one of the album’s keenest, sharpest cuts as a result.

So yes, the sound may be familiar – but I have every hope that From Eden To Exile have started themselves down a road here that will ultimately lead them to fully come into their own. Time will tell.

For now though, crank it up loud and get ready to bang your head! 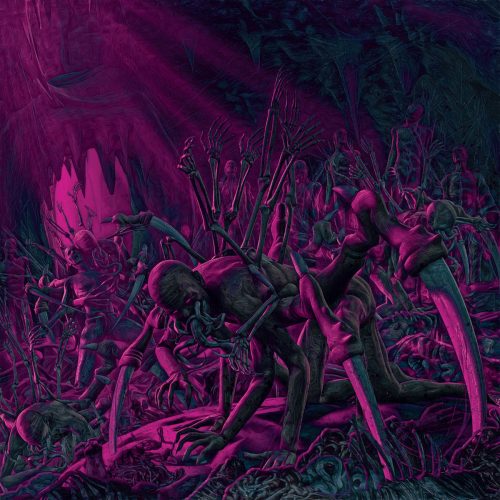 Parturition – the latest release by Oxford-based brutalisers A Trust Unclean – straddles that amorphous line between EP and album, but still delivers eight visceral tracks of Death Metal/Deathcore perfect for fans of bands like Carnifex and All Shall Perish.

Granted, if you prefer your music a bit more organic in nature, then this may not be for you, as there’s barely a note, drumbeat, or vocal line on Parturition that hasn’t been artificially enhanced for maximum impact. But if you don’t mind things a little OTT, then you’ll probably get on with A Trust Unclean like a house on fire.

Skipping swiftly past the slightly unnecessary title-track, “Dominion Over Bone” is where things really kick into gear, all blasting drums and pseudo-blackened riffery at first, before dropping into a stuttering, djent-influenced groove designed to give vocalist Kyle Lamb room to weave his wicked spell, spewing venom and vitriol in a scathing torrent of screeching highs and bowel-shaking lows.

Over the course of the rest of the track the band move back and forth between chug-heavy breakdowns and buzzing tremolo work, augmented here and there by some subtly creepy synths, before the increasingly brutal “Exonerate” takes over in a thunderous display of deathly depravity and twitchy, nerve-scraping rhythms.

“Aeon” distinguishes itself by somehow finding an extra level of vehemence and viciousness, assaulting your eardrums with an almost unrelenting barrage of blackened bile (although the music box/carnival-esque keys at around the one-minute mark are more of a distraction than anything else) which builds towards a truly neck-wrecking finale, after which “Apex” strives to overwhelm the listener with its waves of staccato, rhythmic riffing and deliciously dark melody.

Track number six, “To Encompass and Eclipse”, deploys its heaviness with almost militaristic precision, though the over-reliance on stop-start chuggery does mean parts of the song start to blend together a little, while the quasi-symphonic keyboards come across more as an afterthought than an integral part of the song.

Thankfully, any slack is immediately picked up by the monstrous “Repurposed”, whose ‘core-esque chugs and writhing blastbeats somehow coalesce together into a much stronger track overall, replete with better riffs, bigger hooks, and an all-round better sense of style. Even the synths/keys sit much more comfortably in the final arrangement!

The album/EP concludes with the surprisingly technical strains of “Aetherius”, which mixes in some sickeningly sharp fretwork amongst the usual array of crushing riffs and strafing blastbeats, and also features perhaps the most brutal and bloodthirsty vocal performance on the whole disc.

It’s not clever, it’s not subtle, and it doesn’t know the meaning of restraint… but Parturition is still one hard, heavy, and hellishly aggressive slab of metallic mayhem, so if you’ve been on the lookout for your next quick fix of steroid-injected auditory adrenaline, then grab hold of this one asap.