Raíz Amarga (Spanish for “Bitter Root”) is the first recording by a group of experienced Spanish musicians who have taken for themselves the name Moribundo (“dying” in English). The album’s four long tracks are based on four poems of death and despair, drawing upon traditions of cold, melancholy doom and craggy death metal to carve a musical course that’s intensely atmospheric as well as physically jolting. One song from the album has appeared previously, and we have another one today named “Suicidio Ilustrado” as a further prelude to the album’s release on June 18.

“Suicidio Ilustrado” is in some ways a study in contrasts — in part a grim, crushing dirge, in part a ravaging juggernaut, and in part a mystical haunting. The riffs are mountainous; the drums hit hard enough to vibrate your spine; the vocals are usually the kind of cavernous growls that seem to emanate from some subterranean leviathan crawling toward the surface, or the shrieks of painful torment. 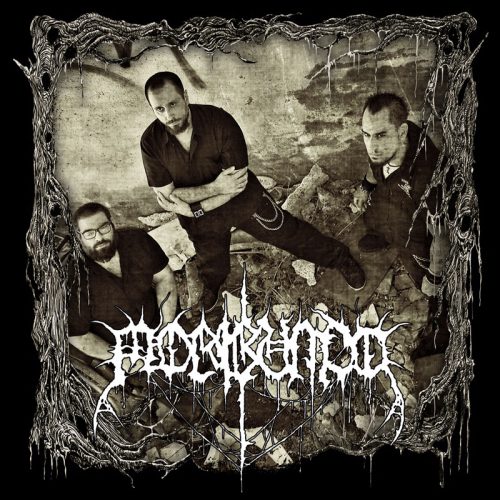 And on the other hand, the song is laced with crystalline guitar and keyboard arpeggios delivering gossamer strands of cold, haunting beauty, as well as solemn wordless voices that give the song an aura of ritual. And so the music is spectral and soulful as well as earth-shakingly heavy, and at times stunningly destructive.

What unites these contrasting elements is an overarching air of dread and despondency, the presence of death made real.

Raíz Amarga features cover art by the talented César Valladares (Asphyx, Necropsy, Nominon, Anatomia). It was recorded and mixed by Evilead at Bizarre Sounds Studio (Spain), and mastered by Hiili Hiilesmaa at Yellow House Studio, Finland (Swallow the Sun, Moonspell, Amorphis, Sentenced). It will be jointly released by the Russian labels Satanath Records and More Hate Productions on June 18.

Listen below to our stream of “Suicidio Ilustrado” along with the previously released track from the album, “Luz (Ciego Color)” (which is a free download at Bandcamp).

One Response to “AN NCS PREMIERE: MORBUNDO — “SUICIDIO ILUSTRADO””