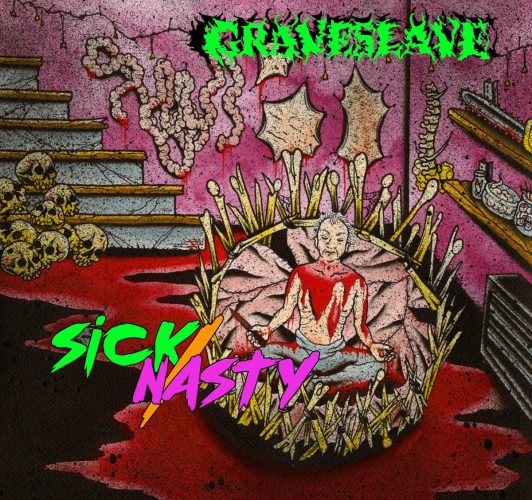 Well, you can’t say Graveslave have given you no warning about the foulness of the new music video you’re about to see. They did name the song “Slit Throat and Garrote“. And they did name the album from whence it comes Sick/Nasty. And then there’s that cover art.

But just in case you’re a bit slow on the up-take, let’s just put it right out there: Don’t watch this video right before you eat. Probably should’t watch it on a full stomach either… unless watching someone being strangled with their own intestines improves your appetite or your digestion.

Sick/Nasty is this Minneapolis-based death metal band’s first album, which includes guest vocals by Cryptopsy’s Matt McGachy on the opening track. We first encountered them through our premiere of a funnier and less gruesome video last year for the band’s single, “Strange Days”, and before that they assaulted listeners with a 2015 EP named Wormtongue. They seem to have been just warming up with those previous releases, because this new track is an even more serious body-mangler and brain-twister. 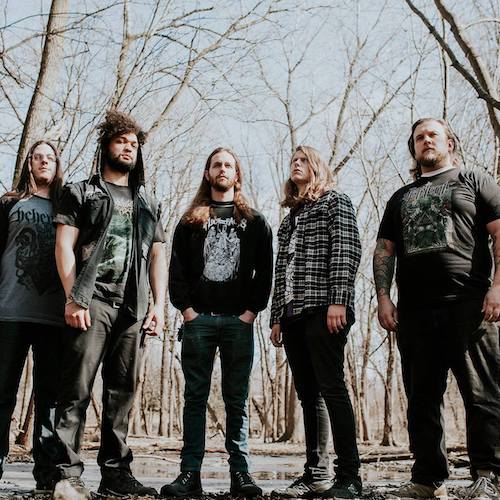 The body-mangling parts of the song come at the beginning and at the end, as the band blast and batter their way through a fury of head-whipping riffs, punishing drum weaponry on full auto, and ravenous howls, gurgles, and retching sounds — spiced up with a jolt of demented soloing, some slam-influenced pile-driving, and impressive technical acrobatics.

But then there’s that brain-twisting part, which comes in the middle, when the slaughtering frenzy subsides and the band segue into a somewhat grisly, somewhat jazzy, somewhat proggy interlude. I would say it’s unexpected, except I just spoiled the surprise. But there are other unexpected twists, including one at the end — and they all work together quite well.

In other words, this is a multi-faceted piece of brutal, horror-prone death metal that’s likely to keep you rooted in place while it has its way with you.

Before leaving you to the video, let’s repeat that warning: Videographer/editor/producer Rico Roman (whose web site is here) has created a graphically sick and nasty video, definitely not safe for work and definitely stomach-churning. And lest you think at first that it’s a misogynistic slasher flick, you’ll discover that the protagonist is quite gender-neutral in his butchery and cannibalism.

Sick/Nasty was recorded by Ian Frand at Juices Studios (with drum recording by Adam Tucker at Signaturetone Recording), and it was mixed and mastered by Christian Donaldsen (Cryptopsy) at The Grid. We will be premiering a full stream of the album on June 29th, so mark that on your calendar in blood.

3 Responses to “AN NCS PREMIERE: GRAVESLAVE — “SLIT THROAT AND GARROTE””