Israthoum was given birth in Portugal in the early ’90s under a different name, apparently conceived by draconic powers, schooled in Qlippothic mysteries, and sharpened as weapons. Relocating to The Netherlands, the band has released two albums to date and a handful of shorter releases. Now, five years after their second album, Israthoum is on the brink of releasing their third full-length (through Altare Productions), bearing the title Channeling Death & Devil. Today we bring you the first single from that album, a track called “Between the Maze and Turmoil“.

It was that second album from 2012 that turned us on to Israthoum’s manifold powers, and our writer Andy Synn praised it in his review with words such as these: 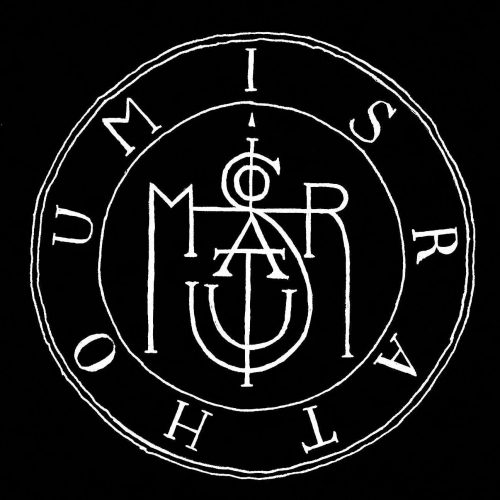 “Black Poison and Shared Wounds is a well-written, and well-constructed phenomenon of an album, self-contained and self-aware, managing to capture the feral nature of early black metal without pandering to its clichés. Every track is a filth-encrusted sermon of suicidal sickness, barely constrained by its confines, pulsing with ardent madness and fervour – a perfect storm of (un)orthodox black metal brimstone, drenched in venom and fire and human degradation.”

Since then, we’ve watched the band’s progress closely, reviewing their 2014 split with Ascetic Temple and premiering a song from their striking 2015 EP, Antru Kald. It would be an understatement to say that we have been anxious to hear this new album.

We will be reviewing the album quite soon, but for now will add only a few reactions to the song you’re about to hear.

In a word, “Between the Maze and the Turmoil” is incendiary. Launched in a delirium of warped and mind-warping riffs delivered at furious speed and by a hammering percussive attack against a backdrop of scalding abrasion, the music manifests as a cyclone of flame. The vocals are also ablaze, a hair-raising discharge of ferocious, serrated shrieks that soar into fervent cries of pain or rage (depending on your interpretation).

But in addition to burning like a conflagration, the song is also dramatic, even bombastic, with a slower mid-section in which anthemic chords ring out, the drums boom, and devilish, dissonant guitar notes flicker like hungry spirits at the edge of your vision. And by the end, for all its raw and rampant energy, the song has proven itself to be spellbinding, cloaked in an atmosphere of arcane mystery and embedded with demonic hooks that will stay in your head.

Channeling Death & Devil will be released by Altare Productions this July simultaneously in LP, CD, and tape formats. For further information about the release as it becomes available, watch these spaces:

One Response to “AN NCS PREMIERE: ISRATHOUM — “BETWEEN THE MAZE AND THE TURMOIL””