When I first saw the artwork by Karmazid for the upcoming Abhorrent Decimation album The Pardoner, I declared that if the music on that disc could be half as cool as the artwork it bore or the concept behind it, then I would be a happy camper. Well, with “Conspire“, Abhorrent Decimation have shown that they are in good standing on that front — releasing a monstrous six-minute brutalizer.

There is one hammering, thudding through-line that drives the entire song, favoring a meatheaded and hefty chug to propel the whole song, veering the band through various prefix-core, and straightforward death metal subgenres at the drop of a hat. “Conspire” is one of those tracks that doesn’t let up, and that constant and driving double-bass roll just wears the listener down to a husk by the time the whole thing wraps itself up, which is also one of the few times the Abhorrent Decimation crew abandon the high-speed piledriver act for a tiny bit of melody.

The Pardoner will impact the planet via Prosthetic Records on July 28th.

I have really enjoyed the lead up to Decapitated’s early July release, Anticult. I thought “Never” was a simple and fun song, and now Decapitated have returned again with another jam of a track in “Earth Scar“. The band have teamed up with Grupa13 for their music video, which places Decapitated out in the middle of the woods for their thrashier take on death metal.

From the small collection of songs that have been unleased so far from Anticult, it seems like the Decapitated guys have found their sound after Carnival Is Forever and Blood Mantra, and will be sticking to it. It’s not the most death metal thing out there, but the guys have traded it in for a sharp sense of speed and groove, which has meant that basically everything Decapitated puts out these days is tailor-made for headbanging. You almost can’t help yourself; they’ve found the subconscious trigger to make people’s heads bob as they plow through each song. The lead break when the band switches to nighttime in the video is just great, and it is only increasing excitement to hear Anticult as a whole on this end. 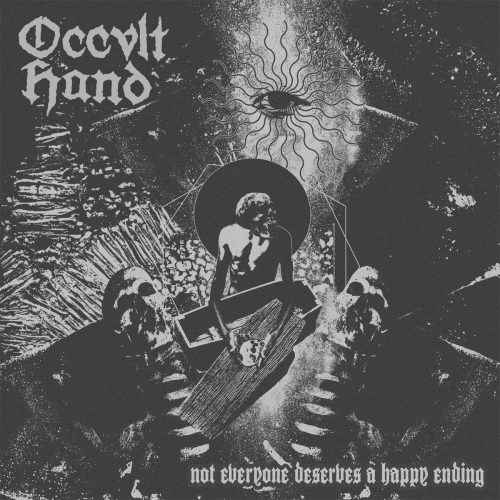 If you have the gall to call your upcoming release Not Everyone Deserves A Happy Ending and then have a song on that album entitled ‘TOTAL FUCKING ABSENCE OF LIGHT‘, then it would be expected that your music will contain a very dark, nihilistic strain. Winnipeg’s Occvlt Hand and their mix of hardcore and metal, which they then slather with their doom-sensibilities, answer that call with ease.

The band chose this week to release a new song called “Smash My Bones, Inhale The Dust” from the upcoming Possessed Records release, and it is bleak. I’ve described this band as having doom influences before on their first release, but with “Smash My Bones, Inhale The Dust” the Occvlt Hand crew go full crawler, with the whole track built around a stomping rhythm and vocals that punch out with precision.

It’s a harsh track that seems to drain the color out of the room, absolutely blatant about its stomping disregard and hopelesness. When you see that the lyrics of the song seem to be written in two-to-three word chunks, it doesn’t really click until the vocalist literally delivers them one. deliberate. word. at a time. Just to cap things off, Occvlt Hand close the song out with the words, “I have never loved anyone/I have never loved anything”, in case you didn’t get the hint beforehand.

Not Everyone Deserves A Happy Ending releases on September 13th. 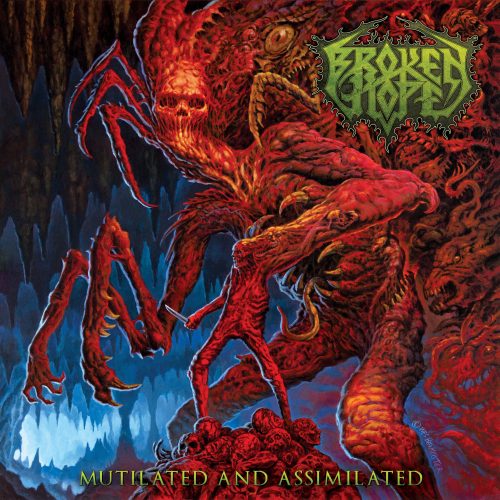 Things have been inredibly active in the Broken Hope camp. Even after putting out a music video for their song The Carrion Eaters a few weeks back, the band haven’t slowed down one bit. Explicitly Intense last week posted up the world premiere of Broken Hope’s song “The Meek Shall Inherit Shit” alongside their album review for the band’s upcoming death-metal-album-as-horror-movie-inspiration disc, Mutilated And Assimilated.

It starts off with a worming, slimy, and insectoid-sounding riff, but then quickly becomes a non-stop brutal death feast, the vocals in competition with the rhythm section for who actually dominates the low-end of the song. There’s a massive chugging section in the middle of the track that seems built to have the crowd destroy each other, which will likely happen during the guitar solo section.

“The Meek Shall Inherit Shit” is the audio equivalent of having someone drop a lead weight on your skull, over and over. 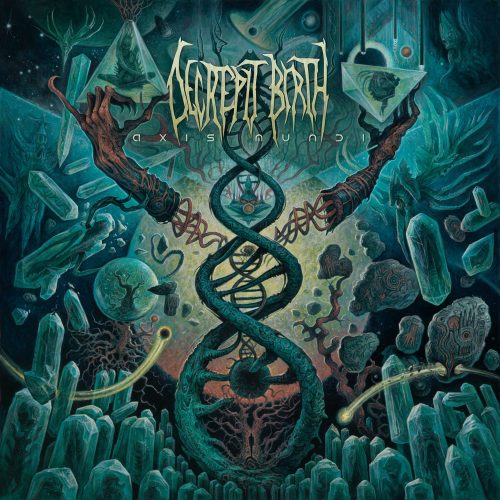 True story: I yelled “Motherfucker!” at 7am while waiting in an airport and caught quite a few people off guard. Allowing you guys to peer behind the writing process on this one:

When I was doing my last roundup before catching a plane up north to see the aforementioned Terror Fest, I kept constantly checking Decrepit Birth’s Facebook page because I had some nagging sense that I had missed something while I was writing up the other music videos and things that we posted last Thursday. I hadn’t, but I had this sense that something was coming from those guys and basically just had this constant hunch that Decrepit Birth were going to put something out and I would catch it just in time.

Instead, what happened was me checking the news on my phone while waiting for that plane and seeing that Decrepit Birth had just uploaded a music video for their new song “Hieroglyphic“, from their upcoming album Axis Mundi — too late to shoehorn it into the round-up.

The five-minute blaster of “Hieroglyphic” is, like many Decrepit Birth tracks, incredibly intricate. The vocal work has words that you’d never thought you’d hear growled, even in the SPAAAAAACE-obsessed tech-death era, as vocalist Bill Robinson pontificates on the nature of expanding the mind and also reminding us what the “D” in DNA stands for. It’s a relentlessly heavy track that doesn’t even bother closing out after its massive, bludgeoning mid-section, as Decrepit Birth favored jamming one more guitar solo and hyperspeed blast section on top of it.

“Hieroglyphic” has a lot of stuff packed into it and will likely take multiple trips to fully unpack, one for the lyrics in on their own, one to take the song in as a whole, one to find which hidden parts finally stick out to you, and the rest to fight your way through the myriad solos. Axis Mundi hits July 21st.

We liked Triangle, the three-part album by the Swiss avante-garde black metal collective Schammasch a whole lot. Now comes word that there is live Schammasch video out there from their set at Roadburn 2017, and that a large part of the captured performance is of said Triangle disc. Do we need to say more?

Prosthetic Records alerted the world to the archived perfomance from the Roadburn crew and their partners over at VPRO 3voor12 last week, and you too can now find that monolithic motherfucker right over here. Of course, after looking at all those reviews for Triangle (which you are doing, right?) and checking out the live performance (which you have done, yes?), you can also listen to Schammasch’s newest EP The Maldoror Chants: Hermaphrodite. To say Schammasch are keeping themselves incredibly busy this year would be putting it mildly.

Let’s break up all the goddamned death metal in this post with something speedier and thrashier.

Quasarborn hail from Belgrade, Serbia, and have just recently released a three-song live recording upon the world — filmed at the Faculty Of Dramatic Arts and then placed onto a TV lying on some cinder blocks for all of us to enjoy.

The fourteen-minute video has Quasarborn ripping their way through three songs: “Blood Honey”, “No Mustapha Mond”, and “A (Suicide) Letter To Humanity”. At no point during those three songs do the band really slow down either, tearing through impressive guitar solos, the occasional angular riff just to show that these guys have chops, and constant circle-pit riffage. The “dumped” TV idea is a brilliant choice on their part from a visual perspective, though I’d still love to see the whole performance in a bigger aspect just to watch the guys slash through those songs. 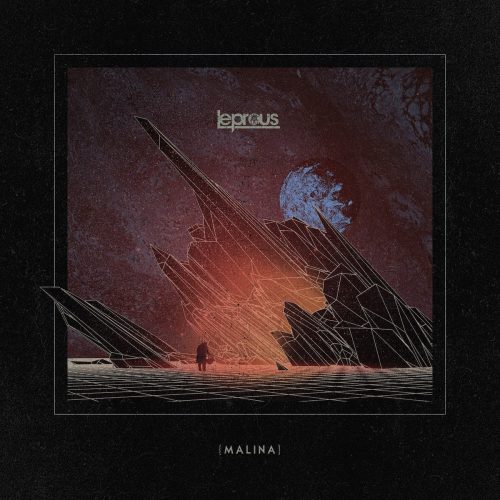 Leprous – From The Flame

It’s a good problem to have, but it doesn’t feel like that long ago that Leprous put out a disc. 2015’s The Congregation has become a constant around here and it is one of those discs that seems to have folded into the fabric of existence. Yet, here we are, and Leprous have another album coming out in August titled Malina and have made a music video for the album’s third track, “From The Flame“.

One of the things that I love about Leprous is that when the band dedicate themselves to writing a power-chorus-driven single of a song, they do it and just absolutely nail it. Like many Leprous songs, the main verses of this one are subtly complicated and suitably bizarre, but when you hit the actual “From The Flame” chorus it’s just a full-blown sing-along. And you know what? It’s great.

Leprous will likely spend much of Malina playing up the prog-aspects that we come to them for — if I were to guess, probably on its two closers “The Weight Of Disaster” and “The Last Milestone”, if we’re going by song titles, but “From The Flame” does a pretty good job at just being a great song on its own. 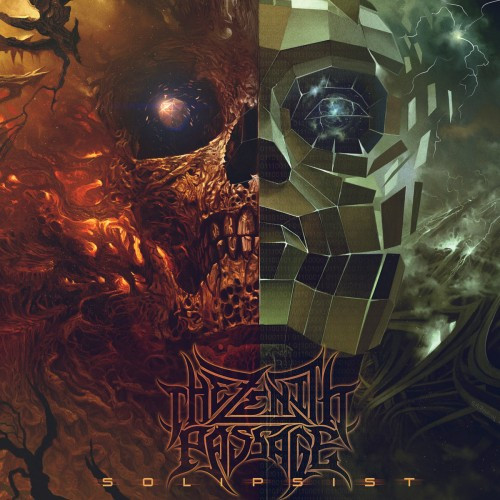 It has been a little over a year since L.A’s The Zenith Passage unleashed Solipsist upon the world. One of the highlight songs on that disc was “Deus Deceptor”, if just for its opening guitar segment, which seems able to claw its way into one’s skull and never lets go for weeks at a time.

Now the band, armed with scrolling green code ala The Matrix (because we’ve cycled back around on that one, haven’t we?) and a veritable menagerie of pallet stacks, have filmed a video for said song. I will absolutely take any excuse to blast through “Deus Deceptor” again, and actually getting to watch The Zenith Passage crew rip through it (albeit with the occasional glitched-out interruption) is an exciting experience.

If you never got the chance to check out Solipsist and would like a slightly more nuanced take than “Damn, that’s a good song”, I reviewed it alongside the release by the group’s Unique Leader brethren Omophagia, In The Name Of Chaos, right here.