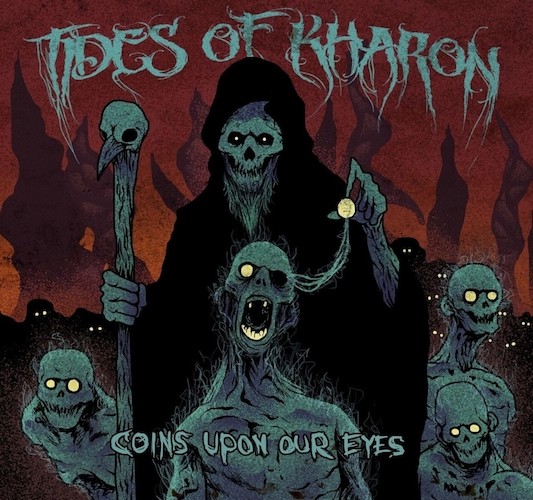 And we have another winner! Another wickedly rendered and eye-catching piece of cover art (this time by Indonesian graphic artist Dann Perdana) luring us into the sounds of new metal, like the creepy guy on the edge of the playground with an unhealthy hunger in his eyes, offering candy to the kids. Or something like that. Okay, maybe that wasn’t the best metaphor I could have picked.

Anyway, I really like the cover art. I really like the song we’re premiering, too. It’s the title track to Coins Upon Our Eyes, the debut EP by a melodic death metal band from Edmonton, Alberta, named Tides of Kharon, which will be released on July 21st.

As the EP’s title might suggest to you, if you’re familiar with tales of the boatman on the river Styx who ferries the dead to the underworld, the songs all draw upon themes from ancient Greek mythology, including (in the band’s words) “the rape of Medusa, Orpheus’ quest to bring back his dead wife, and an unending battle involving the sons of the god of war, Ares”. And so, in addition to the appeal of the EP’s cover art, Coins Upon Our Eyes is also lyrically interesting.

Here’s an excerpt from the lyrics to the title track you’re about to hear: 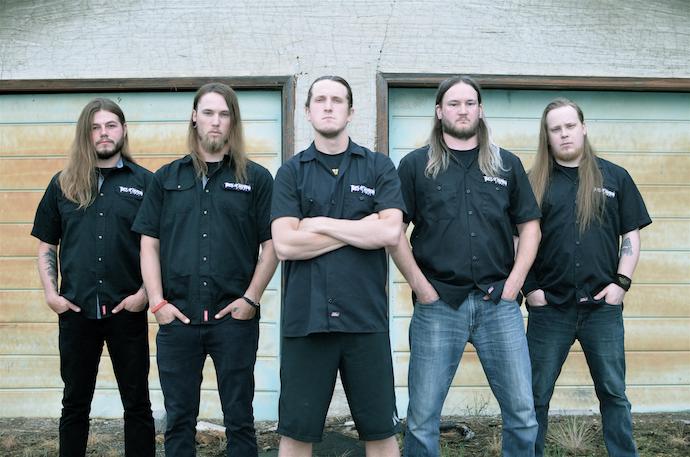 As you’ll hear on the title track, Tides of Kharon have embraced the traditions of such bands as At the Gates, early In Flames, and Amon Amarth. But in addition to tickling the pleasure centers of those of us who first found their way into extreme metal through such bands as those, “Coins Upon Their Eyes” is a big grabber in its own right. More than a nostalgia trip, it’s a powerfully produced, spine-rattling, skull-battering, hard-charging detonation, with vibrantly vicious vocals that don’t let you forget this is death metal first and foremost.

But of course it’s also melodic death metal, and the guitar melodies in the track not only have sharp hooks, they also generate a strong atmosphere, a grim feeling of bleak resignation as well as ferocity, and — as the band ease back on the throttle during part of the song’s second half — a melancholy sense of loss and sorrow over what might have been.

For more info about the EP release and how to obtain it, follow Tides of Kharon on Facebook:

TRACK LIST:
1. Coins Upon Our Eyes
2. The Winter War
3. From Medusa’s Throne
4. Cerberus in Slumber