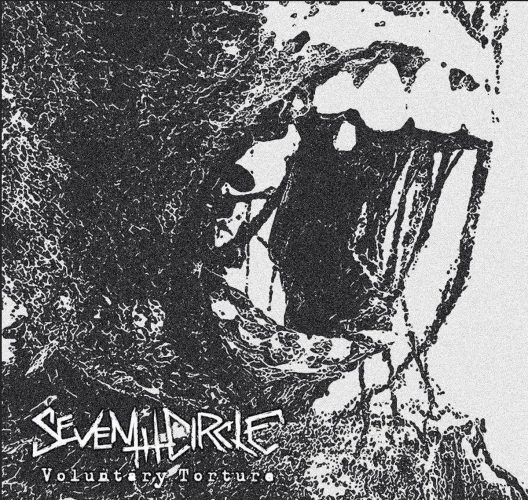 Eons ago when I was in high school one of my best friends, and one of the gentlest souls I knew, got cross-wise with a guy from whom all gentleness had been purged. He hit my friend in the mouth with a brick. It shattered his front teeth and left him shrieking on the ground, his face a river of blood. It was the most violent thing I had witnessed up to that point in my life. That disturbing vision came back to me as I listened to Voluntary Torture.

This debut album by the Belgian band Seventh Circle consists of a dozen compact bouts of mauling mayhem and morbid misery. The cover art is a good match for the music, which comes at your throat with teeth spread wide, fury engaged, all hope purged.

The album will be released on vinyl by the Soaked In Torment label, who recommends it for fans of Nails, Trap Them, All Pigs Must Die, Integrity, Rotten Sound, and Full Of Hell. It combines blackened hardcore, brutal death/grind, and a relentlessly desolate outlook on life (displayed quite vividly through the song titles) to produce the audio equivalent of a brick to the teeth and an A-grade adrenaline spike right in the brainstem. You can (and should) listen to it through our premiere below. 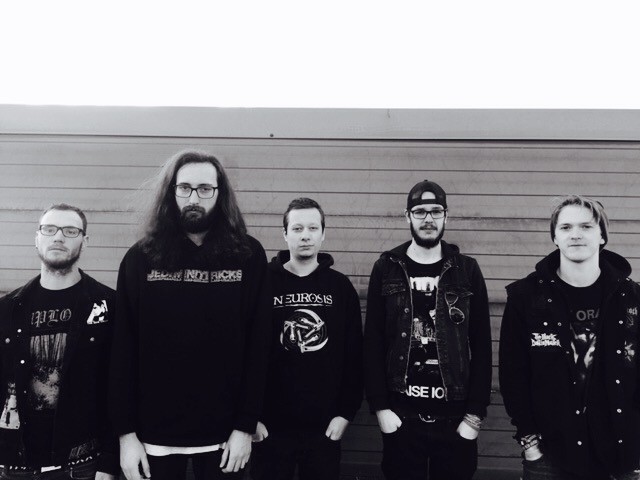 The guitar tone is distorted to within an inch of your life, drawing upon HM2 power to deliver a massively destructive impact. Driven by a jet-fueled drum attack featuring the snap and clatter of a brutalized snare, most of the songs are high-speed barrages — quick trips through an urban war zone. Yet in most songs Seventh Circle also occasionally lift their iron-shod feet from the accelerator long enough to saturate your earholes with plague virus and the stench of burning corpses. “Eye of the Noose” drags for its entire 2:20 duration, providing a titanic, oppressive, pound-and-pulverize fest, and the aptly named and thoroughly murderous “Spineshaker” also shifts into a lower gear for most of its length.

As if the obliterating effect of the riffs and the punishment of the rhythmic grooves weren’t deemed sufficiently ruinous, the band also lace the music with doses of seething tremolo poison and dismal melody. And the vocals — the vocals are throat-lacerating, completely enraged, and convincingly berserk.

Voluntary Torture was recorded at guitarist Kenny’s house, with production and mixing handled by Marvin Dinneweth. The record was mastered by Brad Boatright (Obituary, Integrity, Gatecreeper) at Audiosiege, with artwork and layout by NJL. The vinyl edition is available for order now, limited to 300 copies, with 100 on pink vinyl and 200 on frosted clear vinyl, all packed in a standard sleeve with a lyric sheet and a download code.

Seventh Circle will be playing a release show for Voluntary Torture on August 11 at Ieperfest in Belgium, alongside the likes of Venom Prison, The Lurking Fear, Gorguts, Havok, Napalm Death, Memoriam, and Hatebreed. More info about that, along with a schedule of other live appearances, can be found at the band’s Events page on Facebook.