(Music writer Konstantin, who in past years has written for Serbia’s Nocturne Music Magazine, rejoins us with this review of the new album by the Serbian band Nadimac, recently released by Xtreem Music.)

Following their “schedule” of issuing a full-length album every two years, the Serbian band Nadimac have presented their latest work this July. The new offering comes as their fifth studio album and is titled Besnilo (“Indignation”); the album comes with song titles in both Serbian and English. This LP was preceded by only one split release, unlikely previous albums which always saw between two and five splits published before a new LP.

Without a doubt we can say that this is their most mature record so far, and, interestingly, comes as their shortest one to date (at 34 minutes). Although the band have experimented with several details that they haven’t used before, such as acoustic guitars, the sound is typical Nadimac, a sound we could hear on their previous offerings. Straight-forward thrash metal mixed with doses of grind, hardcore, and crust have again produced a record that you don’t separate into parts and listen to only a piece or two, but instead one that you take in completely, with no break. Crossover has been their trademark since the very beginning, and once again the guys have proved that the formula they created years ago still produces good results. 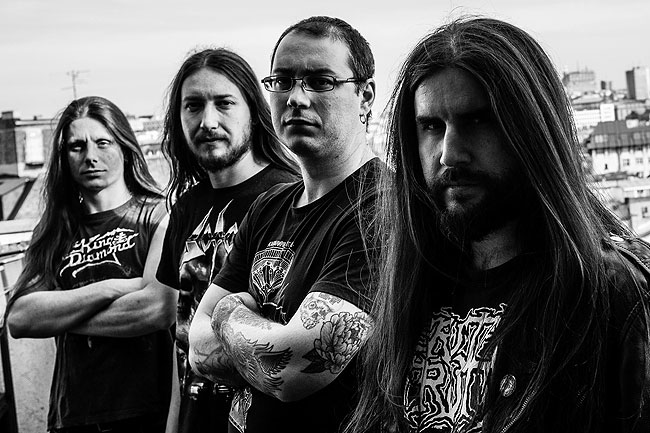 Riffing is again their strongest weapon, and Indignation definitely brings some of the best songs they’ve written in their career. Many of them are catchy, in the vein of famous thrash or crossover bands such as DRI, Sodom, or Exodus, and will definitely become an inseparable part of future set lists.

The maturity that I mentioned in the previous paragraph is displayed particularly in their lyrics, produced again by vocalist Dacha. This time they’ve left out dark humor and focused on social themes, the illness of modern society, injustice, and capitalism. Once again they send a strong and powerful message, accompanied by the middle finger to consumerism and the modern world. People have always found Nadimac’s infantile side interesting, but I believe that with this approach now their outlook is even better and more powerful.

Last but not the least, the overall production and sound are definitely the best they’ve achieved so far, and probably an ideal mix for their work. Clean, yet not polished or technical, it perfectly catches their sound and the image they want to present.

Nadimac are not trying to redefine any of the genres they mix, but they are not recycling old ideas either. Although Indignation could be defined as a typical crossover record, mixed with a few experiments and solid lyrics, it is definitely one step further ahead in their career. I wouldn’t say it is their best record so far, but with no doubt this LP empowers their position as one of the most important bands on the current Serbian scene. If you haven’t listened to them yet, this record could serve as a good introduction.