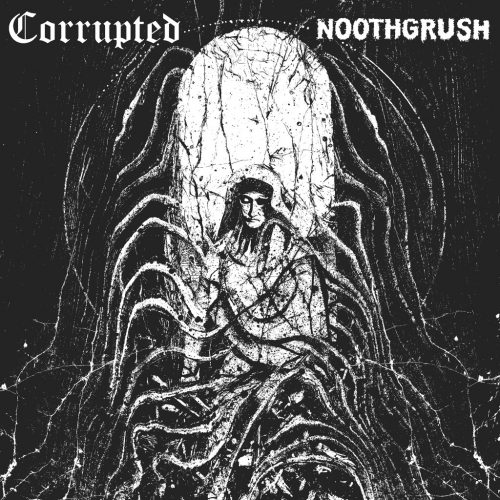 (Here’s Todd Manning’s review of the new reissue of a landmark 1997 split release by Noothgrush and Corrupted, coming in August via 20 Buck Spin.)

If Doom and Sludge are related, and surely they are, then Sludge is Doom’s younger brother, suffering from all sorts of complexes and probably killed their parents because they wouldn’t give him money for meth. 20 Buck Spin has taken it upon themselves to remind us of one of the seminal releases of this most toxic of genres with their reissue of 1997’s split record between Oakland’s Noothgrush and Japan’s idiosyncratic Corrupted.

Noothgrush kicks off the split with the punishing “Hatred for the Species”. Mid-paced, at least in relation to other Sludge acts, the sound here is not unlike EyeHateGod minus the Southern blues influence. What the listener is left with is a bleak and nihilistic condemnation of what it means to be human. If these guys saw the world through these eyes back in 1997, imagine how far humanity has come in twenty years to prove their judgment prophetic.

Their second song, “Draize” is equally if not more despondent. There is a scene in Jim Thompson’s harrowing novel The Killer Inside Me where the victim of a stabbing crawls around on the kitchen floor bleeding out, while the murderer sits at the table patiently waiting for the process to run its course. That slow and agonizing death scene continually popped in my head while listening to “Draize” again after all these years. Slower than the opener, this song is utterly corrosive, a pinnacle moment in the genre’s development.

Corrupted answer with a single track, the fifteen-minute epic “Inactive”. Much of this sounds like a Morbid Tales-era Celtic Frost record being slowly spun by hand on the turntable. The approach is atavistic, simple yet devastatingly effective. At times, washes of cymbals invade the mix, providing strange moments of disorientation, hinting at Corrupted’s legendary unorthodox approach (like being a Japanese band who write a large portion of their lyrics in Spanish).

About halfway through the run-time, the sound of the guitar changes, and they dive into a more mid-paced riff, providing a boost in momentum. They return temporarily to the opening riff, before finishing with a crushing, noise-laden Doom riff that closes the record with an extinction-level sense of finality.

While Noothgrush and Corrupted might have lacked the refinement of many of today’s Sludge merchants, this split is a testament to what makes the genre great. The misanthropy on display here easily rivals anything Black Metal has to offer, minus all the spiritual baggage. We are reminded that the roots of Sludge lie in the murkiest depths of both Punk and Metal, brought together in a chemically dependent alchemy that spits venom in the face of the human species.

Oakland’s Hal Rotter created the cover art for this reissue, and the music was remastered for this release by Brad Boatright. It will be released by 20 Buck Spin in LP and digital editions on August 25.

One Response to “NOOTHGRUSH AND CORRUPTED: THE REISSUE OF A LANDMARK SPLIT”