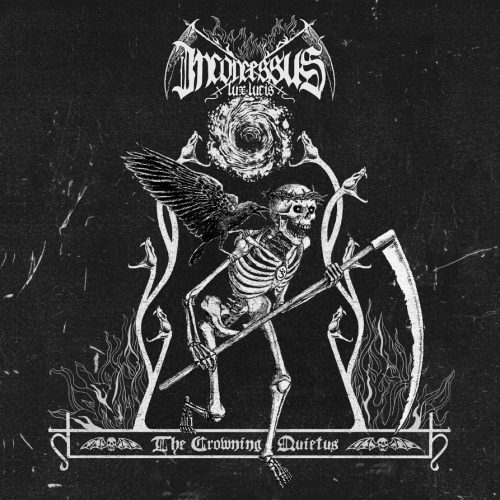 I’d wager that you haven’t heard a song like “The Crowning Quietus” this week. Or this month. Or this year. Or maybe even since the last record by Inconcessus Lux Lucis back in 2014, the Crux Lupus Corona EP from which we also premiered a song. This new one is an out-and-out romp, such a high-energy bast of distinctively hellish fun that it could wake the dead and get them on their feet and moving.

“The Crowning Quietus” is the title track to this British duo’s new album (their second), and it will be jointly released on October 31 by I, Voidhanger Records (CD) and Invictus Productions (vinyl), who are a fine pair of carriers for this untreatable plague of Saturnian Black Magick. 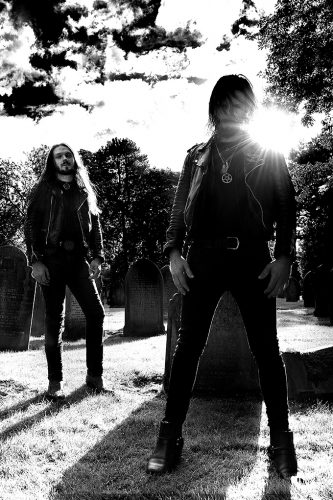 “Saturnian Black Magick” is the name that Inconcessus Lux Lucis have given their idiosyncratic brand of black metal, and it’s a name that rings true once you hear the kind of sonic potions that the band brew. Yes, it is recognizably a fiendishly clever form of black metal, but there’s more than a few vials of Maiden and Motörhead in their bubbling cauldron, too.

The song you’re about to hear is a mercurial affair that rocks, dances, and destroys. The powerful drum rhythm and throat-gripping riff that launch the song and help bring it to an explosive close is the first sign that ILL know how to make people move, and that voice you’ll hear — deep, rounded, knife-edged, and ravenous — is also a sure sign that violence lurks on the edges.

The music is marked by frequent changes of tempo and changing stylistic flourishes as well. Driven by blast-beats and deranged guitar leads, it rips as well as rocks. And it also bounces and bounds, conjuring images of an infernal carnival, with the guitar sounding like a brass band in a sulfurous dancehall. And as the song builds to a delirious crescendo, there’s a completely remarkable extended guitar solo that casts visions of a night in a roadhouse on the highway to Hades.

I haven’t heard the rest of this album, just this one song. But man, I can hardly wait to get my claws on the rest of the tracks. Hope you dig this one as much as I have.

The Crowning Quietus was recorded in Stockholm with Tore Stjerna at Necromorbus Studio (Ofermod, Watain, etc.), and the album features artwork by Bethany White.