I admit that my current mood (fairly black and pissed off) may have influenced the first three picks in this Saturday collection. It certainly influenced my decision to listen to Caustic’s new two-track single… because it’s named Murder the World. 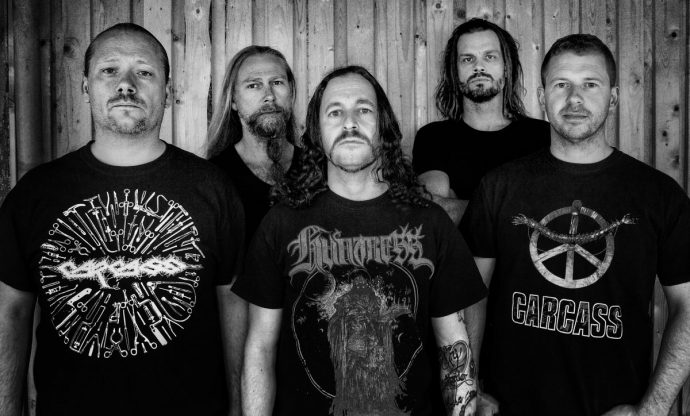 The single marks yet another revival of a band who first came to life in the early ’90s. This Danish group released a couple of demos and a 1995 EP, and then broke up a couple of years later. They reunited in 2011, and Murder the World is thus their first recorded music in more than two decades. I’m damned glad they came back.

I’m tempted to say these two songs are crushing, but that seems too wimpy a word for what Caustic have done here. But in addition to taking a sledgehammer to the skulls of their listeners, Caustic’s brand of doom/death includes seductive strands of beautiful, bleak, haunting melody and thoroughly raw and wrenching vocals. The songs catch in the head and beckon you back like pale hands rising from cemetery earth. Outstanding.

(Thanks to Miloš for this recommendation.) 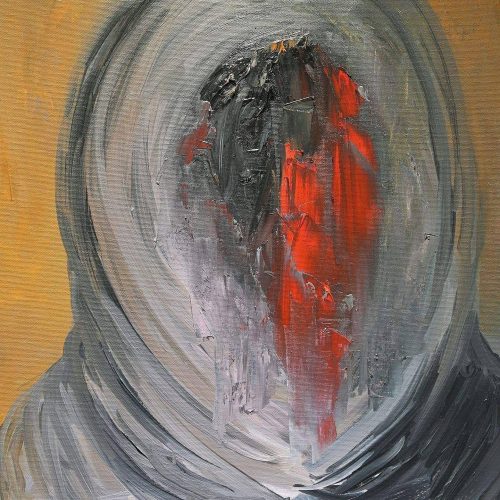 When I listened to this next song I felt like I’d wandered, blind, into the path of a highway and been hit by a semi-truck going above the speed limit, painting the lanes with my innards. Man, did that feel good.

The song, “Ceremony of Innocence“, comes from Debt, which is the debut full-length by a UK trio named Helpless, who definitely are not helpless. It’s presented in a video that’s fascinating to watch. Let me know if you figure it out.

The song is an ever-changing genre-mangler, combining elements of grind, hardcore, freakish noise rock, and doom. It’s as ripping and mauling as a pack of rabid mastiffs, as berserk as an asylum on fire, and as gloomy as the unearthing of a mass grave. Obliterating, and hallucinatory.

Debt will be released on September 8 via Holy Roar Records. The cover art is great, but I don’t know who created it.

UPDATE: Not long after posting this I discovered that Helpless have just released yet another video and song from Debt. This one is called “Sinkhole”, and I’ve added it below. 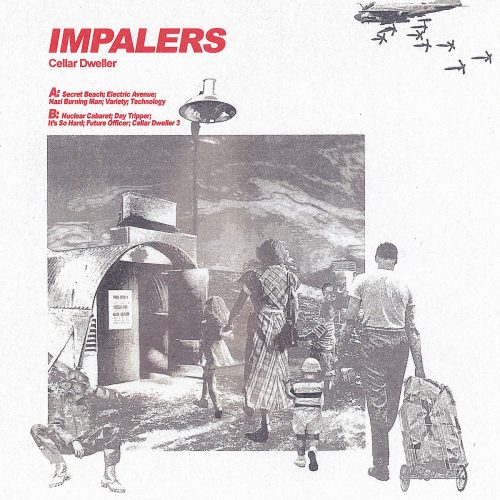 I went to a wedding in Wyoming last weekend. The best man and I got to talking about heavy music. Extreme metal wasn’t really his cup of tea, but he did ask me if I’d heard of an Austin band named Mammoth Grinder, because a friend of his was in that band. I said something along the lines of, “Fuck yes!!!” He then told me his friend was also in a punk/metal band named Impalers who had a new record out. When I got home, I found the album you’re about to hear.

Entitled Cellar Dweller, the album was released in July through 540 Records and Static Shock Records on vinyl and through 627 Tapes on cassette. According to Metal-Archives, it was preceded by another album in 2013 and a handful of shorter releases.

The band does include two members of Mammoth Grinder (who are themselves overdue for a new release), and one of those (Chris Ulsh) is also in Power Trip. He’s the one whose friend was the best man in that Wyoming wedding I attended.

If you imagine being tied to a chair and hosed down with a flamethrower while simultaneously being beaten with crowbars, that might be a good preparation for listening to this stream. But apart from the incinerating and battering quality of the songs and the unhinged nature of the raw vocal fury, they also include some catchy-as-hell punk chord progressions and bounding d-beat rhythms.

What a thoroughly electrifying rush of black-eyed violence this is…. 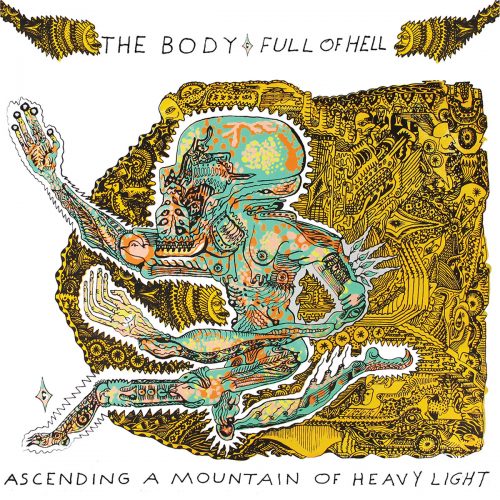 A couple of days ago Chicago’s Thrill Jockey Records announced the release of a new collaborative album by The Body from Oregon and Full of Hell from the east coast. They’ve collaborated before, on last year’s One Day You Will Ache Like I Ache. This new one is named Ascending A Mountain of Heavy Light, and it’s set for release on November 17th.

That’s a long way off. I hope we’re all still around by then, but if perchance a few of us get turned to ash if the two nuclear-powered children who’ve been chewing up the scenery this past week decide to turn their war of words into a shooting war, at least we’ll have this one song to remember as our lives flash before our flash-fried eyes.

The song is “Earth is a Cage“, and surely it is. If you’re familiar with these bands it probably won’t surprise you to learn that they’ve tossed all the usual genre blueprints in the furnace. The thing greets your ears with an opening throb of electronica; it rhythmically pounds and pulses in a way that sets up some kind of irresistible resonance in the brain stem; it howls and shrieks and rampages; it also skitters and swarms with doses of freaky noise; and it pulls the trigger on detonations of industrial-strength demolition work. I like. 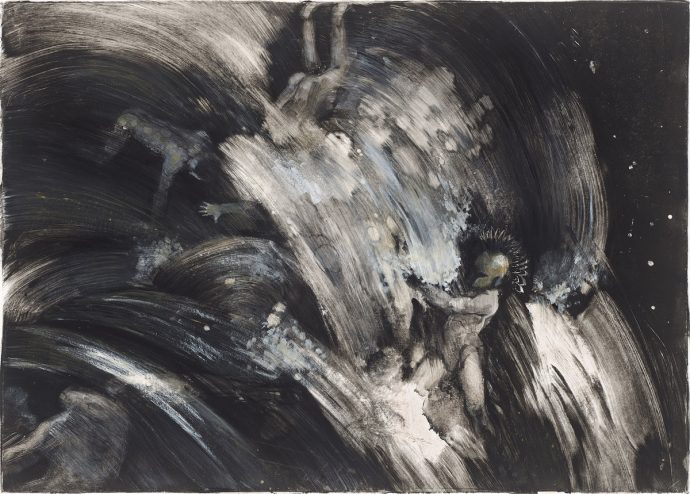 I somehow missed any press, reviews, whatever, about this next album — though having heard it, I assume lots of people are justifiably losing their minds over it. I’m certainly interested in finding out where Serpent Column put my mind while I was listening to Ornuthi Thalassa.

The album was released digitally on July 21, and a vinyl edition is projected for release in October by Fallen Empire. Astonishingly, it seems to be the debut release of this band, whose line-up consists of only two people. Because I’m a nosy bastard, I tried to find out what else they might have done musically under other names, and came up empty-handed. I did receive this explanation from the band, which adds further to the “wow” factor of the music itself:

“Serpent Column is an independent 2-piece studio project from the US. We are embarking on a series of albums and EP’s inspired by the Iliad.

“Every single aspect of Ornuthi Thalassa has been pored over in an attempt to create a cohesive, fully-fleshed out work. The lyrics, for example, are taken from a source poem written by Theophilos (guitars, bass, vocals). Parts of it were rearranged to tailor the music, and most often this involved translating it into a more flexible language: Ancient Greek. Nearly half of all the vocal arrangements are in Ancient Greek.

“Very little of this music is ‘played’ like music – it was constructed more like a painting, with us adding a single layer at a time and tediously fitting every detail into the whole. Just to lay the foundation of the album with the first guitar parts took six months, while the subsequent recording process took eight.”

The music is a ferocious and often dissonant hybrid of black and death metal, but it’s head-spinning in its intricacy and equally mind-bending in the technical acrobatics displayed in these performances. There’s so much high-speed veering and vaulting going on in the fretwork that it sucks the oxygen right out of your lungs, and the drumwork (which is programmed, though you wouldn’t know it if I hadn’t told you) is equally breathtaking.

Yet the songs are the kind of whirligig thrill-rides that are so meticulously well-plotted that they don’t lose their coherence, and there are just enough digressions from the music’s headlong rush (“Theasis” is particularly well-placed) that the album doesn’t leave the listener sweaty and exhausted. Maybe just sweating with excitement. I should add that there are also some very catchy riffs salted around in these songs (see the closing track for a prime example).

A really remarkably good debut, and well worth your time from start to finish.

(Thanks to Miloš for this recommendation, after I stupidly overlooked a previous e-mail from the band.) 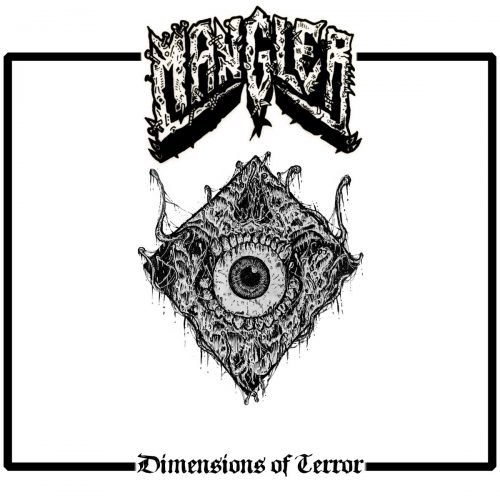 Mangler come from Ottawa, Ontario, and Dimensions of Terror is their debut album. It was released last month digitally and on tape. It was mixed and mastered (and partially recorded) by Topon Das (Fuck the Facts).

Mangler waste no time jamming their hooks into the listener’s head. “Switchblade Homicide” is a turbocharged, plundering piece of crossover thrash that reveals the band’s talent for cooking up thundering grooves, adrenaline-triggering riffs, and catchy melodies. There’s some very good icing on the cake, too, because the vocals are a lot more vicious and seething than you might be expecting… they wouldn’t be out of place in a bestial black metal band.

The follow-on track, “Satan’s Regulator”, eases back on the accelerator, proving that the band can dish out the ominous infernal darkness as well as they can gallop you into the ground. But even in the more mid-paced tracks on the album like this one, Mangler make you want to move. All the riffs, all the way through, are hellishly good. Mangler is proof that Satan wants you to have fun.

(And thanks one more time to Miloš for this suggestion.)