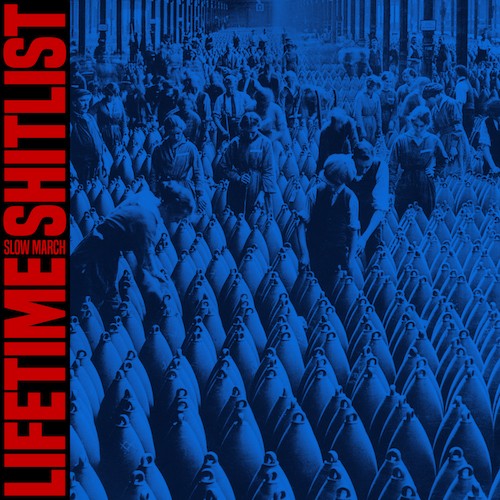 With a name like Lifetime Shitlist and song titles on their new EP such as “Beach of Death”, “Infestation”, and “Death Rattle”, you don’t expect this band to make music that feels like a warm hug and a shoulder to cry on. And sure enough, Slow March will punch you in the kidneys and treat your head like a piece of sheetrock ready for the nail gun. But man, it’s a ton of battering fun — the kind of fun that leaves you with loose teeth the next morning and the kind of bruising that goes beyond black and blue and into that shade of yellow that makes you queasy to look at it.

Slow March manifests some changes from this Baltimore band’s last album, Pneumaticon, including a new vocalist (Ned Westrick), a new second guitarist (Corey Fleming), and an evolution in their sound. For the new EP they also tracked the drums, the bass, and the rhythm guitars live in the studio of Grimoire Records on a single April Saturday, with the vocals added the next day. The gods of the mosh pit must have been smiling on that weekend. 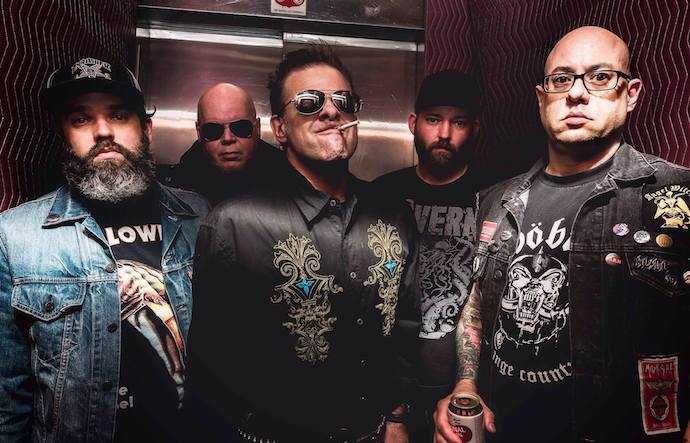 Slow March ain’t a slow march. It has its way with you in just shy of 24 minutes, with each compact song moving like a fully fueled juggernaut. There are times when the band ease back on the throttle and move the music in a lumbering, staggering gait, but for the most part this EP is a romp, a brand of hardcore punk alloyed with metal (and some other ingredients) that’s pure viscerally appealing momentum. And a damned infectious romp it is.

That’s probably the quality of Slow March that stands out first and foremost: as bleak and bludgeoning as the songs often are, the riffs and crowbar-hard grooves are lined with razor-sharp hooks. Every song is catchy, every one of them makes you want to move. Most of them might also make you want to body-check the person next to you.

It’s heavy stuff, too. Drummer Bryan Glaeser rumbles and tumbles and hammers his kit, and the tone slugs you in the gut. The riffs doled out by Matt Crocco and Fleming are thick, jagged, caked with grit, and they jab, jolt, and bludgeon in a way that’s both punishing and addictive, while Crocco’s leads and solos moan and squall, delivering doses of both doom and psychedelia. And Ryan Larkin’s bass work clangs and clobbers and throbs, with a beefy, bone-grinding sonority. To cap off the experience, Ned Westrick’s raw yells and throat-scarring brays make the songs sound even dirtier and meaner than they already are.

You can enjoy all this goodness below, as we premiere a full stream of Slow March in advance of its release in just a few days.

Slow March will be released by Grimoire Records on August 18th, on CD and as a digital download. It was recorded, mixed, and mastered by the label’s main man Noel Mueller, with artwork designed by Mueller as well. Grimoire recommends the EP to fans of Helmet, Nailbomb, and Integrity.