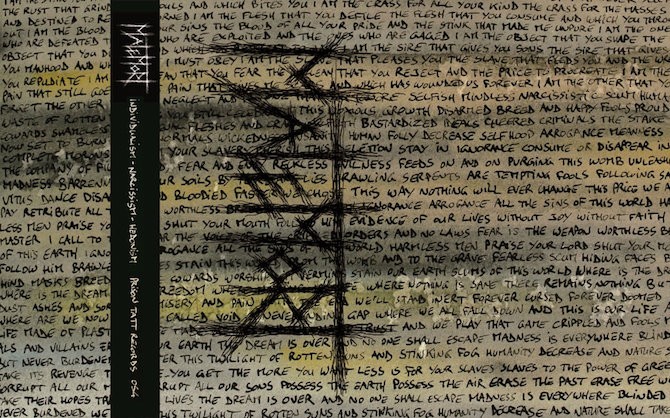 As I listened to this debut album by the French band Malemort I asked myself a question I’ve asked before — though to be clear, I haven’t heard many records in the league of this one: Why do our minds and emotions make such deep connections with music that’s so convincingly calamitous, so mercilessly stripped of hope, so sodden with misery and soaked in blood, so cataclysmically heavy, so frighteningly violent?

Perhaps it’s just the part of us that instinctively admires anything done with the meticulousness of a jeweler’s hand, even if it’s an efficiently organized demolition job. Maybe it’s because death looms over us all, the fear of extinction, the dread of all feeling and thought being snuffed out without warning, like a beautiful daughter torn to pieces in an instant by a machine rammed forward under the direction of a hate-filled lunatic… it’s always right there, hovering on the edges of daily life, and regulalry reminding us of its presence through some new tragedy.

I don’t know. I’m no psychologist. I only know what I feel, and for fuck’s sake I’ll just say it up front — this album is the most stunningly powerful, staggeringly horrific, blindingly apocalyptic doom album I’ve heard this year, and it has few peers in any year. 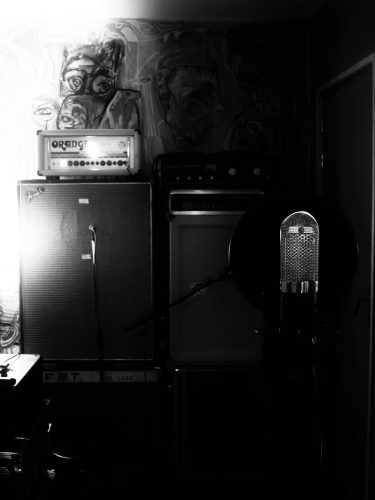 I chose the words in that last sentence carefully. There are melodies in the music; the songs can become uneasily hypnotic; they can seize your head and make it move. But this album is as far from a good time as watching a child ejected through a car’s windshield in a head-on collision.

These four long songs are stupefyingly heavy. Long moaning chords, echoing, gunshot drum beats, and the siren shriek of feedback make you question what the hell you’re doing with your life, because it could vanish in an instant. The atmosphere exuded by these sounds is something like what awaits outside the air-lock on a spacecraft — a vacuum that will turn skin to crystal, boil eyes away in a viscous vapor, consume the body’s moisture more rapidly than any earthly desert.

It’s a summing up of primordial terror and a sonic rendering of emotional sinkholes that stink of death and ooze the effluent of self-inflicted pain. And that pain is conveyed and realized in fiendishly diagramed tortures, not least of which is the sound of the vocals, a horrifying extremity of scathing shrieks, the exclamations of a man whose skin is being slowly peeled off with a paring knife, like a lemon rind, in tandem with raw, throaty, braying roars.

Dissonant guitar notes ring out like recordings of the astonished and terrified gasps of a soul being stripped of the body and the mind that once housed it. These are songs of terrible tragedy.

The slow fracturing of the sensorium, the methodical mortification of emotional well-being, the inexorable plummeting descent into a vortex of nightmares — it could easily be too much to stand for 50 minutes. And so this band — did I mention they call themselves Malemort? — also trigger paroxysms of extreme violence.

Almost 12 minutes into “Worthless Breed”, the song erupts like an avalanche, like great bounding boulders shaken loose by active vulcanism, a torrent of brutalizing, ravaging destruction, followed by a bounding, galloping rhythm matched to dismal, frigid, frenzied riffing. It happens again, almost 10 minutes deep into “The Dream Is Over”. And I won’t pinpoint the other times, because the surprise is part of the skull-stunning power of these songs.

The first time I went through the album these moments were shattering when they happened, electrifying at a primal level. The second time, I knew they were coming… and the hunger for them grew. Not that I wasn’t wrapped up and intent on the squeezing straitjacket and brutal sledgehammering applied in the slower movements. But knowing that the release of violence was just over the horizon added an extra tension and anticipation that wasn’t there the first time through.

Whether the first time through, or the second time, this is a rare experience. I didn’t realize how rare even when we premiered the album’s closing track in June. I described it then as a twelve-and-a-half-minute doom monolith that earns the title it bears (“State of Collapse”), a vast and stunningly heavy crusher that brings to mind visions of humankind’s most vaunted creations disintegrating into mountainous piles of smoking rubble, a song that heaves and lurches with the weight of catastrophe on its back, leaving a trail of decay and despondency in its wake, and then moves forward like a titanic juggernaut, its destructiveness intensifying, the lead guitar vibrating like a ferocious and fearsome poltergeist, and the mammoth drum strikes and bass notes becoming more animated and even more purposefully bone-breaking.

But I hadn’t heard the other three tracks back then, and now I have.

I didn’t fully realize how splintering the experience of the whole album is, and now I do.

Malemort was born in Rouen, France, in the month of August 2015, with a line-up of experienced musicians from the French underground whose other bands you would know of (including but not limited to Ataraxie, Mhönos, and Sordide). A year later the band recorded this debut album, Individualism, Narcissism, Hedonism.

It will be released by Prison Tatt Records tomorrow, just in time for a release show in Paris tomorrow night. I wish I could be there.

Instrumental tracks for the album were recorded live at Postghost Studio last August, and the voices were recorded last September near Rouen. The album was mastered by Stephan Krieger (Monarch, Endless Floods). The band’s logo was created by Julien Payan.

For more info about this release and how to acquire it, watch these spaces:

One Response to “AN NCS ALBUM PREMIERE (AND A REVIEW): MALEMORT — “INDIVIDUALISM, NARCISSISM, HEDONISM””