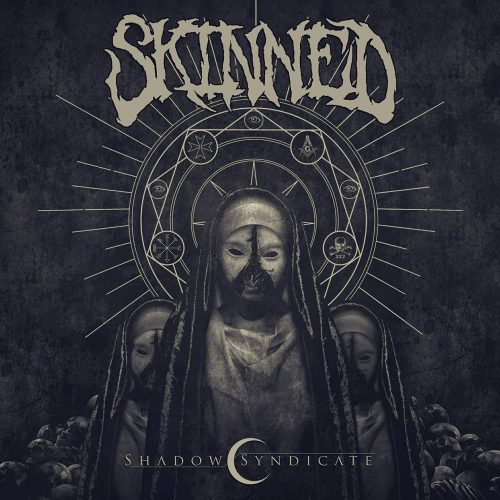 Skinned apparently have jet fuel coursing through their veins and the temperament of serial murderers in the throes of a rampant blood lust. Or at least that’s the conclusion you may draw from the musical killing spree we’re about to premiere, which comes wrapped in an explosive music video filmed by Paul McGuire of Cerebral Bore and Obscenery Films. The song is “We Are the End“, and it’s an electrifying teaser for the band’s new album, Shadow Syndicate.

Shadow Syndicate is this Colorado death metal band’s fifth album in a slaughtering career that dates back to the mid-’90s. It was recorded at Flatline Audio by Dave Otero (known for his work with the likes of Cattle Decapitation, Allegaeon, Khemmis, and Cephalic Carnage), and this premiere comes on the eve of a tour by Skinned across the central United States with the Texas band Prophecy.

We have some details about that tour, but first… some cautionary thoughts about “We Are the End“. 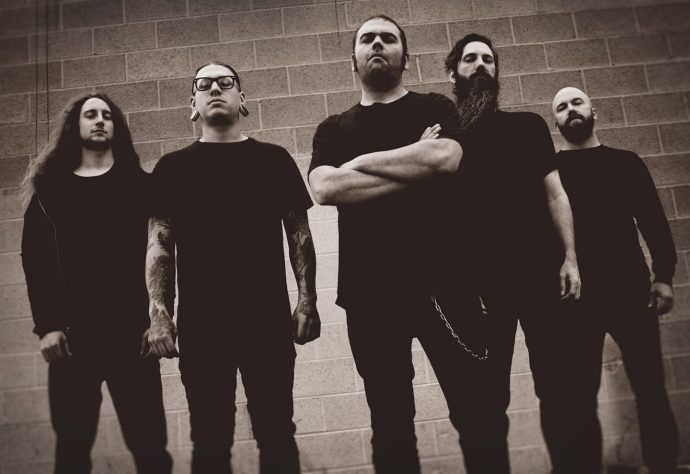 Our best advice is that you take plenty of deep breaths before listening to the track and watching the video, because there’s not much time to breathe while it rockets ahead in a glorious rampage. The band waste no time at all exploding in a blinding flurry of blasting drums (thanks to hyper-fast drummer Jonathan Valdez) and vicious, bone-cutting riffs, accompanied by John Meyer’s brutal growls and the hair-raising shrieks of Skinned’s two jet-speed guitarists, Travis Weickum and Matt Akerman.

If the band had kept this up straight through the song, they might have sent some listeners to the ER gasping for oxygen and in need of defibrillation paddles. But they do break up the technically eye-popping feeding frenzy with a bout of head-hammering groove and a second, slower detour that’s as morbid as a stinking crypt… and then it’s off to the eviscerating races again.

The video vividly captures the intensity of the music, with the performers flying across the frets and the skins, and Meyer’s eyes rolling back in his head in a display of gruesome, barbaric ecstasy. It’s conceivable that the video and the song together could send some listeners into a seizure, so maybe you should call the EMTs now, so they’re on stand-by before you press play.

We mentioned a Skinned tour with Prophecy. It’s a 13-date invasion that begins on August 26th and includes a stop at the Full Terror Assault Open Air Fest in Cave-In-Rock, Illinois on September 8. The dates are listed on a flyer below the video.

For further info about the release of Shadow Syndicate, watch these spaces:

Shadow Syndicate Track List:
1. Wings of Virulence
2. As Their Bodies Fall
3. Mental Deconstruction
4. We are the End
5. Black Rain
6. Shadow Syndicate
7. Hollowed Earth
8. Led to the Trains
9. Angel’s Harp
10. In the Mist of Dawn 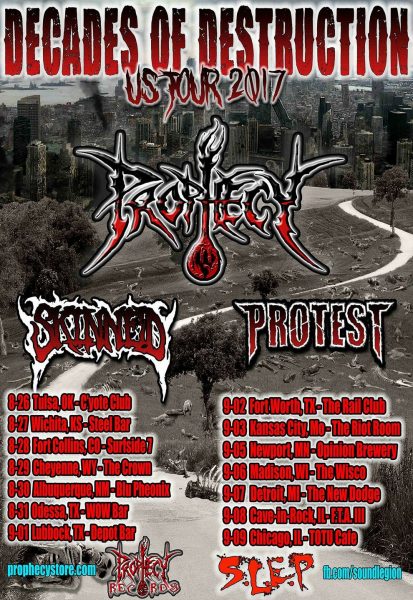 One Response to “AN NCS VIDEO PREMIERE: SKINNED — “WE ARE THE END””