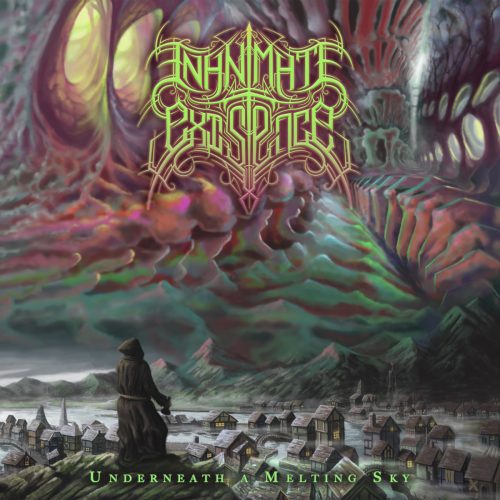 (DGR is experiencing the opposite of writer’s block. After a review and a round-up yesterday, he returns with another review. Today the subject is the new album by California death metal band Inanimate Existence, released on August 25 by The Artisan Era.)

Releasing an album a little bit under year after your last disc is a tall order for a lot of bands. There are a handful of prolific artists out there who seemingly have all the time and creativity in the world, able to put out new releases year-over-year; hell, even the ones who manage to do a new release any time under two years since the last one still seem impressive.

Bay Area tech-death group Inanimate Existence recently found themselves at the most difficult version of that challenge yet, recording and releasing their new disc Underneath A Melting Sky (via The Artisen Era) in the year since their last album, Calling From A Dream, came out. On top of that, the band did that despite some lineup shifts taking place, recording Underneath A Melting Sky as a three-piece. Considering that the band had just recently been a complete five-piece group, Inanimate Existence had a tall order ahead of them as a newly slimmed down trio (slimmed down almost to their first album’s core members, with Cameron Porras and Ron Casey being the tenured members still left). 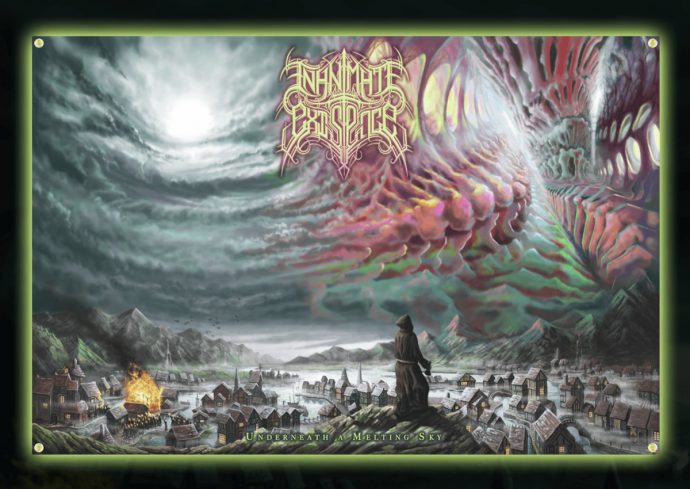 One look at Underneath A Melting Sky’s cover art confirms that the Inanimate Existence crew still aim to keep intact the band’s trademark death metal with a light psychadelic haze, inwardly gazing philosophical interests, and novel-length song titles. Yet, there is still that nagging “just one year later” worry, as every other Inanimate Existence disc has had some decent time between it and the one before. Combined with the previously mentioned lineup shift, is Underneath A Melting Sky able to rise up to the challenge laid before it?

The band took an interesting approach to writing the record: It is an album that constantly folds back in on itself, referencing earlier songs throughout its entire run. Underneath A Melting Sky isn’t one long, thirty-some-odd-minute song, a la Meshuggah’s Catch 33 (or I), but it is an album that includes constant callbacks or similar-sounding melodies to earlier songs throughout, making it feel like it has one constant thematic throughline.

Poland’s Hyperial did something similar with their disc Blood And Dust and if you wanted to be funny, you could argue that Harakiri For The Sky’s 2016 album III: Trauma did this with the way songs seem to pair off with each other and certain melodic lines seem to be resurrected in later songs. Surprisingly, this is something Anathema also did with their release The Optimist. It’s something they’ve been playing with since Weather Systems but there are constant callbacks to earlier songs (even albums) throughout that disc.

So, while not unheard of, Underneath A Melting Sky executes upon this interesting trend fully. Certain guitar melodies seem to be woven into multiple songs and there are little symphonic motifs that intro and outro certain songs, tying together all of the thirty-six minutes you spend with the disc as a whole. It feels less like a collection of tech-death singles and more like a full integrated album.

There are a handful of particularly standout songs and moments spread throughout Underneath A Melting Sky. For example, the guitar and bass freakout during the faux-breakdown chug segment in the middle section of the title song makes for a fun change before the near constant blast and wall-of-guitar that follows it. And if Inanimate Existence do play up one tech-death trope to the maximum, it’s their ability to slaughter all of their instruments, making for multiple guitar sections that crawl all over that fretboard and plenty of hyper-speed drumming bits.

In other words, if you were hoping for the Inanimate Existence guys to dive wholly into guitar worship during the new album, then your wish is pretty much granted by the second song. If you’re a big fan of the rhythm section, then the way “Underneath A Melting Sky” spills over into the following song “In Moonlight I Am Reborn” is tremendously enjoyable. “In Moonlight” is also one of the first times where you’ll note that the album seems to be calling back to earlier sections. Its opening melody seems to pop up throughout Underneath A Melting Sky as a whole, and the band also appear to be huge fans of the odd guitar effect they have going during the quieter moments of that song.

Fourth song “Blood Of The Beggar” is one of the tracks that can really stand on its own, though, without being augmented by the song before it or after it. The opening groove of the song is such a shameless headbanger’s riff that you can’t help but get excited every time it returns. “Blood Of The Beggar” also doesn’t get too overwhelmingly blast-heavy, keeping the tempo of the song more chugged and rhythm-focused than the songs prior to it. It is one of the moments where the -core effect on the California tech-death scene shines through, the rhythmic groove and hammering drum basically meant to whip the crowd up into a frenzy more so than demonstrating that Inanimate Existence are guitar wizards. I wouldn’t be shocked in the future to hear that this one is destined to be a permanent part of the band’s live sets from here on out.

Speaking of another song that the band will probably be stuck playing live, Inanimate Existence go full-blown epic during the three minutes of “The Unseen Self”, which helps cap the album. It turns the band into a light symphonic tech-death band for a bit. “The Unseen Self” moves quickly and goes for the apocalyptic hammering blast whenever it can; even the quick death metal drill that makes an appearance has the force of a jackhammer.

Underneath A Melting Sky is an impressive feat. It had the difficult task of following the preceding disc only one year later but has done so with an interesting take on Inanimate Existence’s brand of inward gazing. It has also further made it seem that every disc by the band (so far) will be starkly different from the others. Shying away from the distinct singles approach proved to be in the band’s favor this time around, as you can’t help but let Underneath A Melting Sky constantly run from front-to-back whenever you give it a listen. The way the songs intertwine with each other is enough to lock a listener in, whether or not they have a full appreciation of the amount of skill on display.

Underneath A Melting Sky manages to get beyond the technical-death-metal label and into something more interesting, building its own identity as a thematically connected series of songs, carving out a psychadelic musical concept amongst the no-notes-left-behind approach that their chosen genre lends itself to. That Inanimate Existence managed to crank all this out as a three-piece (now a four-piece, with the band having been rejoined by guitarist Joel Guernsey in advance of their upcoming tour) is even more impressive. With Underneath A Melting Sky, Inanimate Existence really seize the chance to stand out on their own.

2 Responses to “INANIMATE EXISTENCE: “UNDERNEATH A MELTING SKY””