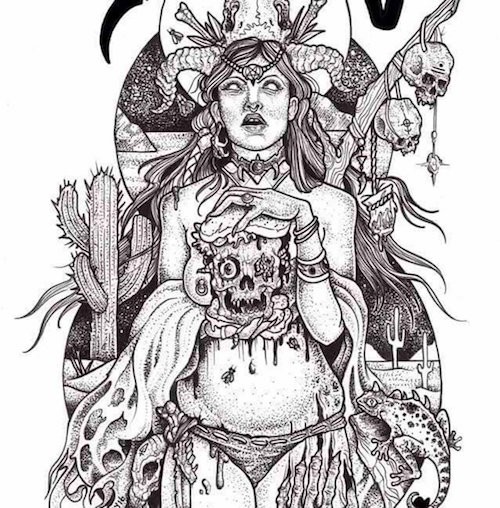 I had a busier than usual weekend that left me little time for NCS, and so I wasn’t able to compile a SHADES OF BLACK post yesterday. I did spend some time here and there exploring new music, and it occurred to me that the collection you’re about to hear would make for an interesting playlist to start the week.

I don’t know whether you will find this as interesting as I did, but I chose these songs and the order in which you’ll hear them in order to juxtapose very different sounds, alternating between extremely heavy, harrowing music and music whose emotional effect is more sublime, or more uplifting. (Thanks to Miloš for links that led to most of these discoveries.)

I chose to lead off with the Vancouver sludge/funeral-doom band Sand Witch, because the first song from their new demo (“The Cushion of Roosevelt’s Wheelchair“) itself provides a dramatic contrast that kind of encapsulates what I tried to do in arranging everything in this post. It moves from a slow, reverberating, elegiac guitar instrumental that’s beautiful and mesmerizing… to a shockingly heavy and abrasive apocalypse of sound, also slow, but soul-shuddering in its brute intensity. 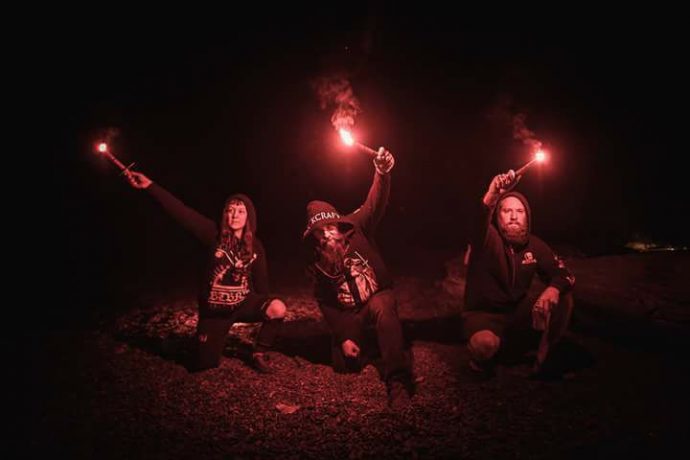 Apart from being calamitous in its sheer physical force, the shrieks of feedback (and the tortured human shrieks) put your teeth on edge, so effectively do they channel pain. The music does eventually begin to move at a more head-moving pace, to the point that around the 7:00 mark, it segues into a masterpiece of pure body convulsion. But even then the song is still as black as stage IV lung cancer.

“The Cushion of Roosevelt’s Wheelchair” is more than 10 minutes long, and the second song tops 12 minutes. The beginning of “Children of A Lesser God” isn’t quite as slow or as hypnotic as the opening of the preceding track, but it still builds from something almost meditative toward something that resembles the collapse of mountains.

The moaning, soulful guitar melody that runs through the instrumental destruction combined with the vocalist’s wrenching shrieks is deeply sorrowful, but it hits you where you live. And when this song hits its main groove, augmented by one of the ugliest bass tones I’ve ever heard, it also triggers convulsive bodily movements… at the same time as it’s liquifying your internal organs.

Holy shit, is this heavy. 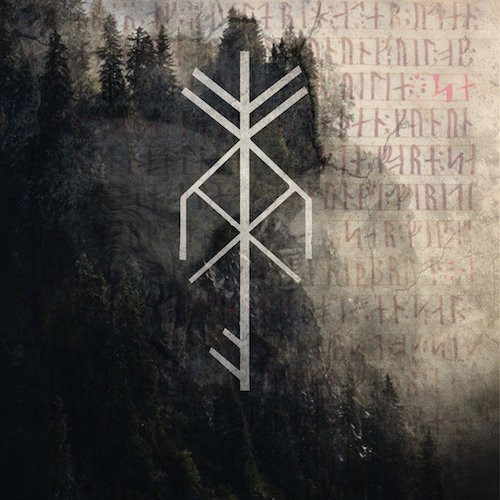 OSI AND THE JUPITER

Now it’s time for the first of the big contrasts I promised you.

Sean Deth from Kent, Ohio, the frontman/bassist of Witchhelm and Burial Oath, named this project after his two German Shepherd dogs, Osiris and Jupiter. Using Osi and The Jupiter as the project’s name, he has used it as a vehicle for the creation of music “based of northern pagan beliefs and the worship of the old gods as a reflection in nature”. The name of his new second album, released about 10 days ago, is Uthuling Hyl.

The lead instrument here is the cello. On the opening track “Baldur“, it’s backed by slow waves of ambient music, which itself sounds like the deep thrum of symphonic strings. The electrified arpeggios of the cello are simply spellbinding, with an emotional resonance that’s heart-aching. The deep boom of the drum evokes a sense of ancient ritual. An atmosphere of forest gloom and glinting mist surrounds this sorcery.

Eight more mystical, magical tracks follow “Baldur“. Ethereal voices, both male and female, play a role in some of those, as does an acoustic guitar and other percussive devices. As you make your way through them, you’ll be carried further and further away from there here and now, transported by a haunting, hypnotic, and intensely moving experience. 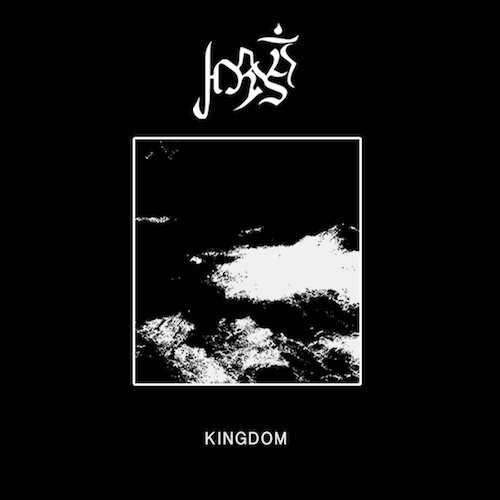 In a way, I regret having to disturb the reveries into which the last album will have lured you, but I did say the point of this post was to create alternating contrasts. And so I’m now turning to a three-track EP named Kingdom released in August by a sludge trio from Singapore who call themselves hrvst.

This is powerfully head-moving, head-battering music, with great visceral intensity. The rhythm section shakes you to your core, but there’s more to the music than that. The melodies are unerringly bleak (as are the vocalist’s raw howls and unhinged shrieks), and often eerie, and they coil about your head like a huge python, injecting venom through bursts of dissonance and flurries of seething guitar violence. And so, while the songs are disturbing, they prove to be addictive as well. 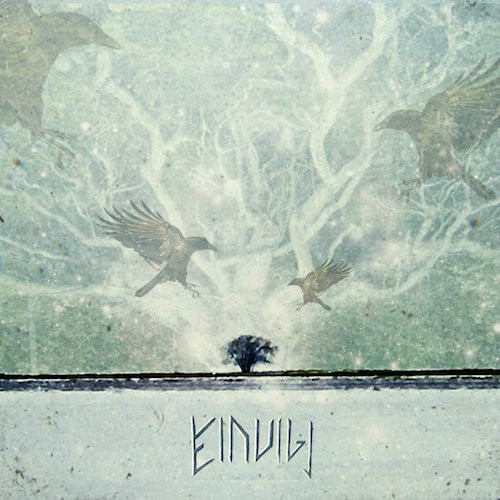 And back we go in the other direction.

hrvst may have left you in need of an orthopedist or a psychiatrist, for treatment of both bone and mental fracturing, but Einvigi provides treatment for the pain.

The opening track from this Finnish band’s new EP (released in August) is light, bright, and immediately seductive, from the first strummed melodies and lilting arpeggios straight through into the high clean vocals (yes, this is one of the exceptions to our normal Rule). From that folkish beginning, “Ennustus” proves to have different dimensions as well — things do get heavy and jolting as the song becomes a gallop, with a keyboard melody soaring into the clouds.

The three remaining tracks incorporate similar ingredients, integrating acoustic folk melodies and shining keyboard melodies with hard-charging, blood-pumping heaviness (and harsh growls play a role, along with the clean vocals, both expressing the lyrics in Finnish). The songs also include some scintillating guitar solos.

Einvigi take their inspiration from Scandinavian mythology, art, and nature. Their music proves to be inspiring as well. 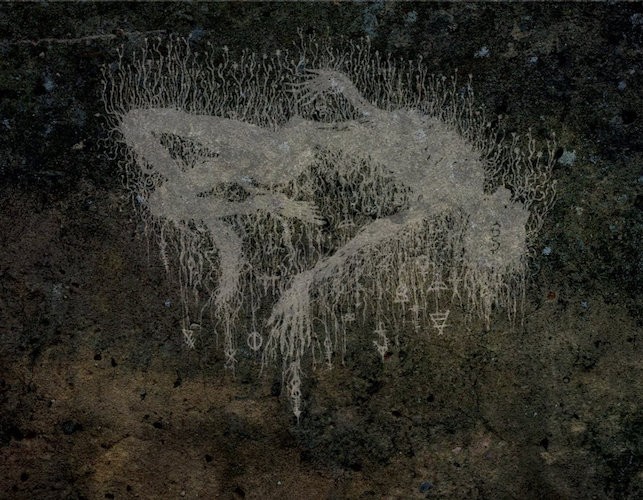 One final turn of the path lies ahead — and the path steeply descends as well as turns.

The final item in this collection is the debut album of Beneath the Sod, which is the new solo project of Dublin-based Ray Keenaghan, who is also the drummer for such bands as Wreck of the Hesperus, Gourd, and Fern Floor. The album was released in June by the Irish cassette label Fort Evil Fruit, though it’s also available as a digital download.

The music is described as “a soundtrack to slowly mummifying bog bodies”. With that description, coupled with an album title like Circling the Drain and the album’s distinctive but disturbing cover art (not to mention the band’s own name), perhaps it won’t surprise you to learn that this isn’t comforting music. It’s more like a clawed hand plunging into your chest and shaking your broken, bleeding body like a rag doll while simultaneously tearing your sanity to tatters.

There’s often a huge rhythmic pulse to this calamitous music, the kind of deep inhuman drive that brings industrial music to mind. And to those brute-force rhythms Keenaghan adds his own abundant skills as a drummer, both amplifying the music’s gut-punching force and rattling the listener’s head with outbursts of percussive acrobatics.

However, the calamitous nature of the tracks is rooted in more than the plundering rhythms. They are layered with (among other things) paranormal ambient droning tones, destructive chords, haunting reverberations, abrasive and deranged noise of the kind that scars the brain, and Keenaghan’s own mind-scarring demon shrieks, ugly growls, and gruesome roars.

The intensity and pacing of the music ebbs and flows, but the overarching atmosphere is one of oppressive doom and degradation. This is a mapping of a wasteland and a very effective summoning of the horrors that inhabit it. You may need to take this in multiple doses; the full album run in one sitting is like running a gauntlet.

The album features guest appearances by guitarist AC (WOTH, Malthusian) and vocalist Baggy (War Iron). The cover art was created by Unhinged (Paul McCarroll), with the logo crafted by AC.

One Response to “CONTRASTS: SAND WITCH, OSI AND THE JUPITER, HRVST, EINVIGI, BENEATH THE SOD”