After that, they embarked on a series of EPs, simultaneously pushing the improv. and experimental aspect harder, while also returning to a more “digestible” form of death metal for some of the songs. Given that, I had high hopes and a lot of questions as to what their newly released album, What Passes for Survival, would have to offer. But above all, I went into it knowing not to place expectations on it, since Pyrrhon are an amorphous and ever-shifting beast — and this album holds true to that established maxim. 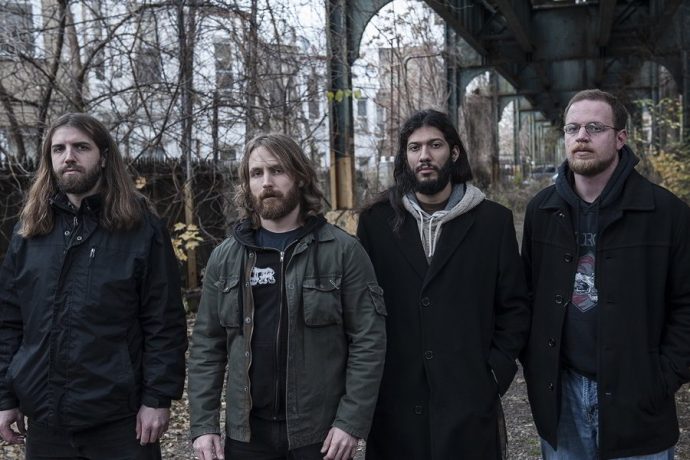 In a way, What Passes for Survival is a much more direct and ravenous experience, by Pyrrhon standards that is. And that’s an important point of distinction to make, since even though it may be more streamlined, the material here is still so abrasive, manic, and unnerving, there’s a good chance it’ll still be too much for some death metal heads. At the same time, the album also continues the group’s collective desire to toy and tinker around with experimental and improvisational ideas. In doing so, they’ve found a way to further both sides of their sound without compromising anything.

That’s an admirable feat, and one which comes about due to the music’s intertwined tornado tangos, between noisey experimentation and complex ruthlessness, which move in a massive variety of inventive and supremely harsh ways from start to finish. While, to my ears, the band have always drawn some influence from both mathcore and grind in their music, it definitely seems that the inclusion of elements from both is more prevalent in the material here than on past efforts. This ends up accounting for what I might dub the more direct, chaotic, and ravenous-sounding Pyrrhon found on What Passes for Survival.

As is usual with every Pyrrhon release, every member delivers an incredible mindfuck of a performance here. It takes a special group of musicians to create music this batshit crazy and be able to deliver it in a way that feels cohesive in spite of being an intentionally jarring and ugly-sounding album. Taken as a whole, What Passes for Survival has the equivalent of about five albums’ worth of ideas in it; this is one deranged motherfucker that demands your full attention.There’s a whole world to absorb within its depths, and I love albums like What Passes for Survival for the unique experience this kind of dense, skronky madness has to offer.The re-play value is enormous, and I’m always picking up on new things with each listen, even after 30 full spins of it easily so far.

Another one of the album’s strengths is the way it ebbs and flows, like a mutated host continually birthing new forms of death and disgust, then letting them wither on the vine and starting over again. It starts off with a strong deranged opening statement on “The Happy Victim’s Creed”, where anguish and genius intertwine to form delicious terror akin to a litany of ingredients re-formed into a singular whole after being chopped and re-configured into a bloody uncomfortable new mass. After that, “The Invisible Hand Holds a Whip” segues into more ferocity, albeit in slightly shorter form and with more of their noisey experimental side woven into its overall aggressive focus in a different way than the opening track’s style of assault.

The hilariously titled “Goat Mockery Ritual” follows next and offers another salvo of batshit intensity and manic angular rhythms colliding and bouncing around in between murky and razorsharp angry riffs while Doug Moore does his best sewer-monster mega-lows overtop the musical trainwreck in motion. An easing back of the throttle and intensity coupled with a dialing-up of the experimental side breaks up the pace on the following track, “Tennessee”, but even that only lasts for the first two-thirds of the song. It eventually culminates in an intricate, mind-melting fury that could be mistaken for the sounds of Satan orgasming while a meth lab fire spreads across the land.

Then after that you get a lot more of Pyrrhon’s frantic and disturbing material on “Trash Talk Landfill”, which kicks off with an utterly grim opening sample before their usual explosive nature takes hold, with this song in particular pulsing back and forth in a quirky manner, like a drunk driver hoping to cause the best of all possible horrific acts of destruction.

After “Trash Talk Landfill” comes the album’s three-part suite, “The Unraveling”, which again breaks up the pace and flow similar to how “Tennessee” did that earlier in the album. Part of that is due to all three of “The Unraveling” tracks being very short and swift numbers that bleed into each other with ease. Although it begins as a warzone, “The Unraveling Part I: Hegemony of Grasping Fears” eventually threads in more of the band’s noisey and experimental elements within its contrasting death metal core. Then “The Unraveling Part II: Free at Last” twists that formula into a more straightforward experience, though no less dark and fucked up to hear. Lastly, “The Unraveling Part III: Live from the Fresh Corpses” caps the three-song suite with yet another different take on miniaturized Pyrrhon madness, distilled to fit a shorter time frame while still kicking your ass.

After those three short songs fly by in the blink of an eye, What Passes for Survival moves on to its massive monster of a closer to give this hellish experience a proper and fitting end. One thing I was secretly hoping for on the new album was a repeating of what that happened on The Mother of Virtues — the appearance of a lengthy epic closer that would distill and warp all their elements into something truly insane. And sure enough, What Passes for Survival has a dreary, passionate, and cutthroat multi-part closer in “Empty Tenement Spirit”, one that vacillates over and over between cold and uncomfortable atmospheric restraint and unhinged warp-speed intensity. It expertly embodies the wounded themes and harsh feeling of modern life that Pyrrhon’s music speaks to so well, but on a larger scale and executed in a more grandiose way.

What Passes for Survival is yet another laudable and intriguing release from a band who continue to push their own boundaries and limits, and those of death metal as well, with their eclectic and cacophonic approach to deconstructing the genre and re-envisioning it in a litany of bold new forms. Every time someone tries to yell about how new death metal is boring, all I can think of is how wrong they are, because bands like Pyrrhon exist, and are doing amazing things that deserve to be praised and pointed to as a notable example of forward-thinking death metal in the modern era.

5 Responses to “PYRRHON: “WHAT PASSES FOR SURVIVAL””