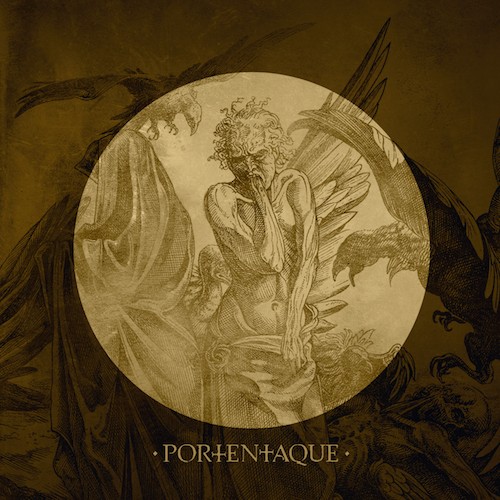 Almost  two years on from the release of their debut album Anxiety Never Descending, the Polish death metal band Kult Mogił (whose name translates to “cult of graves”) have surfaced again with a new EP named Portentaque. It is an immaculate rendering of madness, each of its three tracks intricately plotted, constantly changing, persistently fascinating, and deeply unnerving.

The EP will be released by Pagan Records on September 29, and today we’re helping to premiere what has become one of my favorite EPs of 2017. 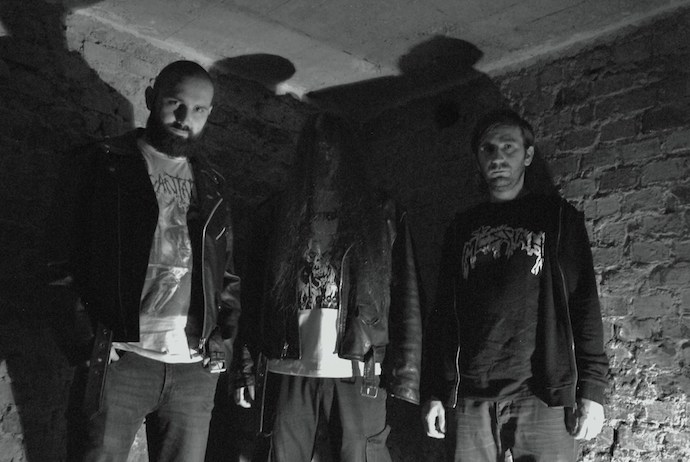 The music generates sensations of terror, derangement, and horrid ecstasy. It’s oppressive and monstrously heavy, and it’s also hallucinatory and utterly alien. It seems to mangle and warp what passes for reality, pulling the listener into someone else’s nightmare, inviting you to experience the visions of fractured minds, or perhaps the effects of demonic possession.

Wholly apart from the unsettling and spine-shivering effects of being riveted to music that’s this immersive and this powerful in manifesting insanity,  the EP is fascinating in another way. Simply noticing what each performer is doing from moment to moment, and how their performances each contribute to the music’s overarching impact becomes its own entertainment.

The vocals are terrifying. They may keep you awake at night. They often are nothing more than proclamations, but they are the expulsions of a madman — a continuously morphing array of horrid, blood-choked growls; tortured cries; blistering shrieks; wild yells. What’s perhaps most  unsettling about them is that they sound human.

The drumwork on the EP is yet another marvel. It is in almost constant flux, driving the music into thunderous storms, settling into slow and deliberate rhythms and allowing the guitarist and the vocalist to take primary responsibility for doing truly freakish things to your mind, slapping you in the face with sharp snare cracks in the midst of gales of ugly, grinding riffs, blasting away like high-caliber weaponry.

The bass is equally mercurial, but the main thing to know about the bass is that it sounds titanic.

And the guitarist resembles some kind of evil genius at work. The music includes the kind of cold, murderous, tremolo grinding that brings Incantation to mind, as well as reverberating peals of dissonance, warping and writhing leads, squalls of bleak and cyclonic sound, eruptions of shrieking dementia, and the eerie shimmering of emanations from alien dimensions. The EP ends with a solo that sounds like some kind of twisted trumpet fanfare.

And so the EP is enormously successful at multiple levels. It is well-calculated and well-executed to weave a certain kind of very disturbing spell, to become an 18-minute excursion into frightening nether-dimensions that leaves the listener wide-eyed and shivering by the end. But it also handsomely repays repeated listening, because there is much to dissect here, and much to marvel at.

Look for Portentaque on September 29 from Pagan Records. Ordering info can be found below. The artwork was prepared by Jose Gabriel Alegría Sabogal (presented in full in the vinyl version), and the layout is credited to Mentalporn.

One Response to “AN NCS EP PREMIERE (AND A REVIEW): KULT MOGIŁ — “PORTENTAQUE””